Brand Insight: How HP Is Getting Real for the Holidays 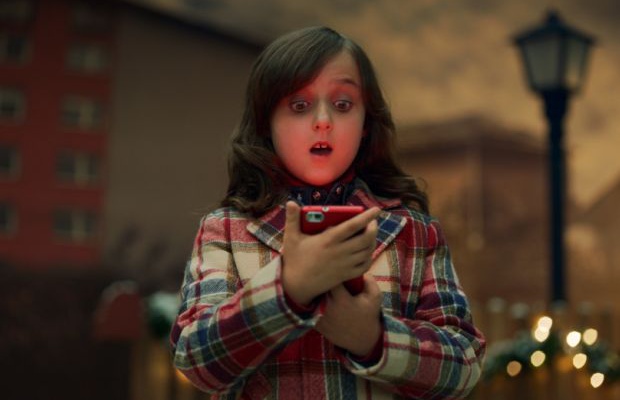 Christmas is a time meant for togetherness but statistics suggest that the average family spends over 250 hours on their screens over the holidays. HP is aiming to get families back to the tangible ways to enjoy the season in its festive campaign ‘Get Real’. The campaign was created by Goodby Silverstein & Partners and features a brilliantly fun central film directed by the King of tangibility himself Michel Gondry. The set design really is an absolute joy - just wait for the rotating sofa when you check out the film below.
The legendary Partizan director also lent his hand to the digital aspect of the campaign, which involved HP partnering with artists and influencers to develop over 250 hours of printable activities. At a dedicated site (hp.com/getreal) you’ll find exclusive comic books by @adamtots, original colouring pages by @boccaccinimeadows, holiday bingo by @adamjk, Star Wars and Frozen content from Disney, recipes from AllRecipes.com, and yes, even a paper airplane designed by Michel.
LBB’s Addison Capper chatted with Deepak Masand, global head of print marketing at HP, to find out more.
LBB> Why did it make sense for HP to comment on our obsession with screens? It's an interesting approach for a tech brand!
Deepak> HP believes technology should serve humanity. Not the other way around. So we want to encourage the imagination and inventiveness that comes from making tactile, real things. And technology can still deliver those experiences. When our digital and physical worlds meet, that’s when the magic happens.
LBB> Where did the idea come from to base the campaign around a re-work of 12 Days?
Deepak> We came across a shocking statistic that during the holidays, the average family is spending over 250 hours on their screens. In an effort to remind people of the joy associated with real, tangible items we thought we’d revisit a classic holiday tradition: the '12 Days' song. It’s no longer 'lords-a-leaping' and 'pipers piping' … it’s 'teens-a-texting' and 'swipers swiping'. The song helped show the challenge of balancing our digital and real lives, and celebrate print as a way to reclaim real time this holiday.
LBB> How did you decide on the lyrics and different scenarios to feature in your version of the song? Was there a big list of screen-based tendencies that you had to whittle down?
Deepak> We had a HUGE list of lyrics — including children-charging, dads-downloading, siblings-streaming and the ultimate … Barries-bingeing. But we wanted to make sure every scene was relatable and relevant. Like scrolling on your phone in bed. Or everyone on screens on the car ride to grandmas. Those scenarios rose to the top.
LBB> Possibly a silly question, but why was Michel Gondry the right director to bring this to life? And was the process like for getting him involved?
Deepak> If any director is a champion of the real, tactile world, it’s Michel Gondry. He prefers to shoot everything practically, in camera. That’s what makes his work so imaginative and different than anyone else. Once we had our script, we approached Michel to see what he thought. And he came back with these magical scenes that made our jaws drop. He invented these two distinct worlds where the spot lives, making sure they were completely different visually and musically. With his music background, he was also instrumental in defining the music, produced with Squeak E Clean Studios.
LBB> The central message of the campaign is to be more hands on with Christmas activities - what can you tell me about the printable activities element to the campaign? How and why did you enlist the artists and involved? And wasn't Michel involved in this too?
Deepak> Michel also designed the paper airplane that is featured in the spot — which is available on the site. For the 250 hours of content, we wanted to create content that was worth printing. In addition to our brand partnerships with Disney and Allrecipes, we enlisted help from dozens of creators that were already celebrating the magic of paper and print in their work. We let them run wild, and were blown away by their creativity and are excited to feature all of their creations on hp.com/getreal.
LBB> What were the trickiest components and how did you overcome them?
Deepak> 99% of the film was shot in camera, practically. So the couch actually comes out of the wall, and the beds actually fall. The big challenge is figuring out practical solutions to make it all work. Fortunately, Michel’s production team excelled at creative ways to bring his ideas to life. Beyond the spot, we had to rally dozens of artists to wrestle all of this content to the ground. We have recipes, paper airplanes, gingerbread house templates, holiday cards, 3D cards, dreidels, paper dragons. Everything you see in the spot can be printed, plus hundreds more.