Art for Change Prize: Meet the Judges for the UK 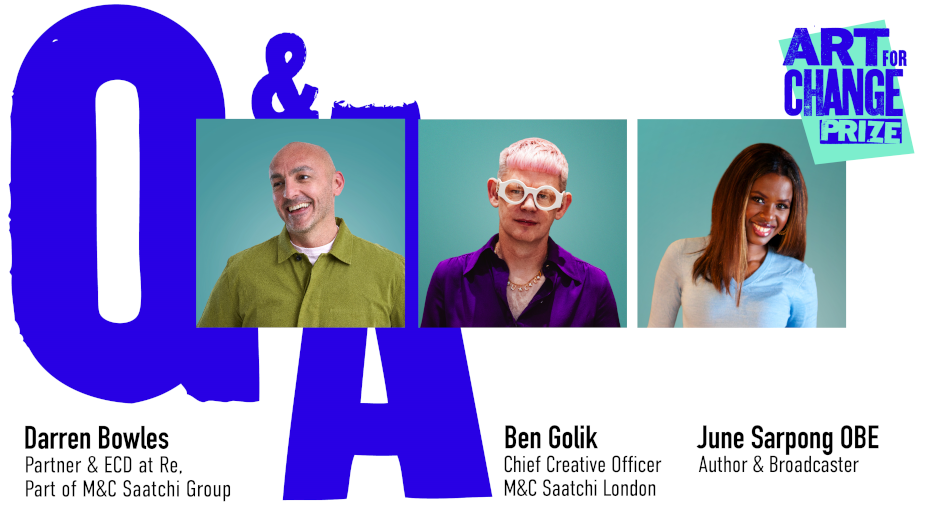 As part of a shared mission in making art, culture, and creativity accessible to everyone, this prize will stimulate dialogue around visual arts as a medium for positive global and social change and give exposure to emerging artists worldwide.

Six winners from around the world will be decided by some of the best business and creative minds from the M&C Saatchi Group globally and eminent guest judges. In this Art for Change series, we hear from our regional judges. Find out what makes them tick artistically, what equality means to them, and what they are looking for in our winners.

1. Describe yourself in 3 emojis.

2. How would you explain your job to a child?

Darren> I get paid to do my hobby, imagining and creating.

Ben> I colour outside the lines.

June> I’m a connector of people.

3. Tell us what inspires you.

Darren> I get inspired by people going off the familiar creative path.

Ben> I grew up in the countryside, so have no romantic ideas about open space or peace and quiet. I’m inspired by cities. The more chaotic the better. Masses of people all anonymously and individually doing their own thing in their own way – that’s real freedom.

4. What excites you most about the Art for Change Prize?

Darren> I’m excited about feeling challenged. I recognise the privileges I receive, through no merit - just society. So, I’m keen to learn and feel more from those who are fighting conscious and unconscious inequality.

Ben> In my day job, I’m privileged to see new ideas all the time. I guess I’m kind of hooked on that. Art for Change is an amazing chance to be inspired by the next generation of artists and creatives, giving their most unexpected responses to this year’s theme of ‘equality’. Like any creative review, I want to see things I wish I’d done, and things I’d never even thought to have done. Any act of creation is also an act of vulnerability, which is an amazing thing to be let in on.

June> I believe visual storytelling is one of, if not, the best mediums to create change.

5. This year’s theme is ‘Equality’. What does ‘Equality’ mean to you?

Darren> A drive for equality should be what makes us human. A balance and parity of the rights of all to have equal footing, equal opportunity. Birth, geography, race, gender identity or sexual orientation is chance not choice. None should predetermine your future.

Ben> There’s a big different between being equal and being the same. For me, equality is about respecting, even revering our differences. Understanding they are equally valid and valuable. It’s everyone having a chance, without anyone taking that chance away from someone else.

June> Levelling the playing field for everyone.

6. You’re judging entries from the UK. What will you be looking for as a judge?

Darren> I’m looking for clarity of idea, the emotion that art can elicit and at times the comfort or discomfort we can have from realisation being portrayed.

Ben> I hope to feel anger and redemption; fear and joy. It’s such a deeply personal and socially charged theme – ultimately, I want to see work that’s made with feeling, that makes me feel something.

June> I will be looking for authenticity, provocation and excellent skill.

7. What does art for change mean to you?

Darren> Art is such a powerful medium. It can come without political agenda. It can engage with your emotions rather than your rationality. It can make change happen, it helps us to understand but also feel emotionally charged and passionate. Art cuts into us at a deeper level.

Ben> Art has an incredible power to spark responses and start conversations, especially around difficult subjects. It can put into visual form that which we find hard to describe, or uncomfortable to say. Great art can change the world, simply by starting the conversation we are not having, or are collectively ignoring.

June> Survival of the planet and the species.

8. If you could steal one artwork from art history, what would it be?

Darren> What a question! That's a tricky one. I'm going to break the rules and choose two. Girl with a Pearl Earring, by Johannes Vermeer. Not that it is a style, a period or a medium that I prefer, but because of its timelessness - it looks of today as much as 300 years ago. The emotion, the light, the simplicity, the eyes that capture your attention between melancholy and innocence. It’s very powerful. I’ve always enjoyed the sheer joy of Jeff Koons’ Balloon Dog. IBM, an old client had one in the reception of their building in New York, it never failed to make me smile. Plus, the bonus of being worth a bob or two.

Ben> The longest I’ve ever stared at a single artwork is The Garden of Earthly Delights, by Hieronymus Bosch. Glorious chaos. I’d like to (carefully) rip it off the walls of the Prado.

June> Basquiat’s birth certificate! Where it all began!