Trends and Insight 0 Add to collection 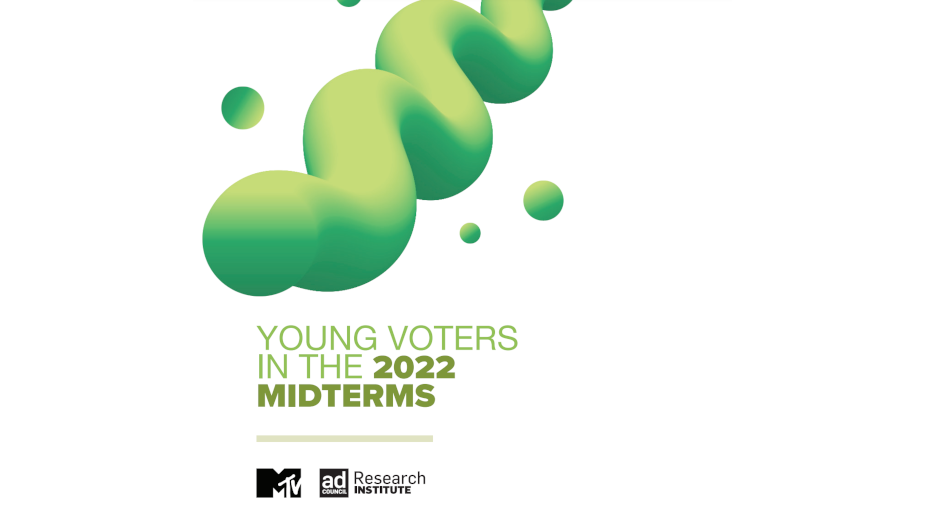 The Ad Council Research Institute (ACRI) and MTV Entertainment Studios today announced the initial findings from a collaborative research project that seeks to demystify voting attitudes and perceptions among younger Millennials and voting-age gen z Americans. With midterm elections quickly approaching, the study sheds light on what young people know about voting, what motivates them to go to the polls and what turnout might be expected in November from the voters that now make up nearly a third of the electorate.

Today's findings are the first phase of the Messaging Young Voters in the 2022 Midterms Report, and include an environmental scan, social listening and qualitative analysis designed to understand young voters' motivations and potential barriers to the voting process. These initial results will inform a deeper quantitative exploration of insights in the next phase of the study to be released in the fall – both phases are being made public and shared with brands and non-profits to incorporate these learnings into their get out the vote efforts to excite and encourage as many American youth as possible to vote.

"While both the 2018 midterm and 2020 presidential elections broke records for youth voter turnout, there was a discrepancy between those who were registered and actual turnout – we need to solve for how to close that gap," said Brianna Cayo Cotter, SVP of social impact for Paramount Media Networks & MTV Entertainment Studios. "We are excited to work together with the Ad Council to help us to better understand the issues and motivations beyond access so that we can ensure that more young people's voices are heard."

While many of the issues that drove record voters to the polls in 2018 and 2020 remain, a high percentage of these voters – more than 90% of voters in each party – are pessimistic about the power of the vote to bring about change and are frustrated and angry with what's happening in Congress. Regardless of party or candidate affiliation, significant numbers of young people believe American democracy is in trouble. A spring 2022 issue pulse survey from ACRI revealed that 70% of Americans feel the country is headed in the wrong direction, and 58% percent of all voters (including 56% of voters ages 18-29) think America's system of government needs major reforms or a complete overhaul. In addition, many new state voting laws that repeal pandemic-era changes and implement restrictive provisions (like stricter voter ID and residency requirements) will make it harder for young people to register to vote in college towns. This makes it all the more important for young people to understand how to vote and the importance of their involvement in the upcoming Midterms.

"These directional insights and forthcoming deeper quantitative analysis through our partnership with MTVE will empower so many organisations working nationally and locally to activate young voters across the country," said Derrick Feldmann, lead researcher and managing director of ACRI and Ad Council Edge. "It's critical that we understand not only where to reach young voters, but also what messaging will prove to be most effective in the bipartisan effort to mobilise them and ensure their representation during the upcoming midterms."

Today's study also provides recommendations for those developing campaigns targeting young voters, based on attitudes and actions during elections since 2018. In the 2018 midterm election season, any kind of contact with a young person prior to Election Day improved the likelihood that they'd vote, but knocking on their door and speaking to them in person was most effective. In 2020, social issues, particularly racism, drove young adults to the polls. Driving this historic turnout was communication from trusted messengers—peers, educators and civic organisations—as well as the belief among more than 80% of youth voters that the election would ultimately affect everyday issues.

Organisations working to increase voter engagement in the midterms should also consider messaging that educates young voters on how to vote early and demonstrates how issues affect their everyday lives as part of democracy. This will be more successful in getting young people to the polls than efforts to persuade them to choose one candidate over another. Campaigns should also seek to engage the largely ignored block of young adults not on college campuses currently unregistered to vote, who can be easily reached through social media.

A social listening portion of the study was conducted in partnership with social media research firm MarketCast, using proprietary technology to analyse hundreds of thousands of conversations among the young social media users (ages 13-29), specifically around voting and political issues, and across all major social platforms. The analysis found that marginalised communities are among the most vocal around voting, as are young people in states with headline-making issues. This age group prefers quick, informal, objective messages through platforms like TikTok and Instagram. Notably, much of this content includes engaging videos that are objective and nonpartisan, focusing instead on social issues and their impact over ties to a specific political party. Growing up in an era of "fake news," young users seek influencers and talent they've deemed trustworthy of delivering unbiased truth over campaign rhetoric. 86% of users ages 13-29 get their political news directly from social media (predominantly Instagram and TikTok) and prefer messaging that's both informal and visual.

In addition to the environmental scan and social listening analysis, the qualitative discussion among 30 gen z and young Millennial voters (ages 17-29) across a mix of political ideologies and affiliations revealed that, across all demographics, young voters believe voting is an important civic duty, though many doubt that their vote matters.

The majority of participants say they're motivated to vote by several key social and economic issues like abortion rights, inflation, climate change, gun safety and cost of living increases. While some point to physical barriers of voting like voter ID laws and polling times conflicting with work hours, others note high-level barriers that have caused them to become disenfranchised: gerrymandering, the divide of red/blue states and the structure of the electoral college.

Of the messaging approaches tested in the discussion, empowerment and issues message frames resonate strongest with young voters, while those that highlight voter identity and creating a moment were less motivating. For gen z and young Millennial voters, who are educated and informed about the role and impact of midterm elections, messages that reinforce the tangible impact that midterm elections can have and the responsibility citizens have to make their voices heard will likely resonate the most.

The complete report and findings released today can be accessed here.

The next phase of the study will use quantitative methods to further test message frames that resonate with young voters, as well as dig deeper into their personas, their knowledge and attitudes toward voting, and educational gaps around the voting process. The research will also be looking to better understand what actions young voters believe will truly enact social change, and what factors would make them feel their vote is critical to our democracy.

This collaboration between ACRI and MTVE will contribute to the key insights available for brands and causes across the country to drive voter turnout among this growing and vital demographic in the upcoming 2022 midterms.