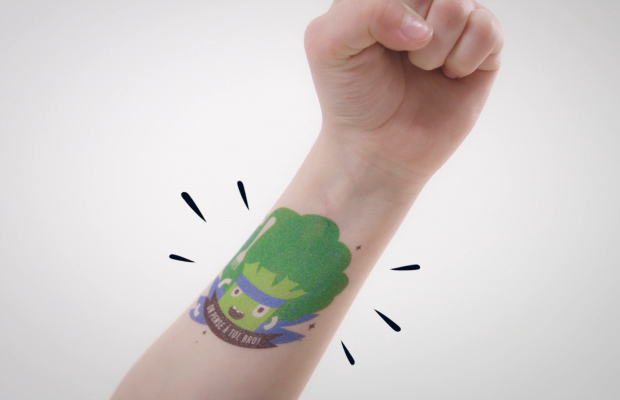 IGA is launching animated tattoos for tough cookies, benefiting the Fondation Charles-Bruneau, created by Sid Lee. Until June 12, they will be sold in-store to raise funds for paediatric cancer research.
As a long-time partner of the Fondation, IGA wanted to find a new way to solicit donations. “Every year our customers are extremely giving, and this year, we wanted to give them an extra reason to be generous,” explains Nancy Champagne, Marketing Director at Sobeys.
“Children who have cancer go through so many hardships. They’re real tough cookies,” says Julie Desrochers, Creative Director at Sid Lee. “We wanted to pay tribute to them and encourage them, but we also wanted to make them laugh. So we looked for a way to raise money for the Fondation using a positive message that wouldn’t play the pity card, and that everyone could participate in.”
That’s how they came up with tattoos for tough cookies, the first temporary tattoos animated in augmented reality using Facebook’s AR technology. “We’ve seen a lot of attempts with augmented reality that have fallen flat because there were too many steps to get it to work. By using the functionality that was recently integrated to the Facebook app, it becomes much easier because there’s nothing to download.”
Five different versions were created: a sushi, two broccoli variants, a cookie, and a singing potato. Each tattoo comes with a message of encouragement and when you look at them through a phone, they come to life in a fun way.
Pierre Bruneau, a well-known anchorman in Quebec who lost his son, Charles, to cancer 31 years ago, is seen getting a tattoo to promote the initiative. “We generated anticipation by posting photos of Mr. Bruneau in a tattoo parlour on Instagram,” explains Jocelyn Goyer, art director at Sid Lee. “It was picked up by tons of websites and it really grabbed people’s attention."
The video is accompanied by a complete campaign whose goal is to boost sales of the tattoos in-store: videos, radio, print, billboards, web banners and POS displays. The initiative would not have been possible without a generous contribution from Québécor, who is also a major partner of the Fondation.
The tattoos are on sale for $2 each in-store and on igatattoos.com. But hurry, they’re temporary.