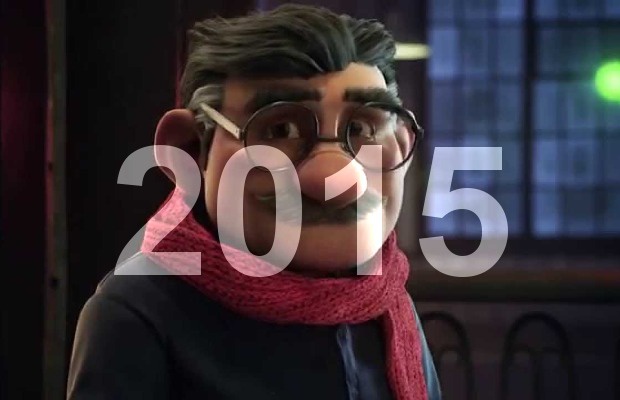 2015 marked the halfway point of this decade we’re swiftly heading towards the conclusion of. It also felt like somewhat of a turning point before everything, well, changed. The Brexit vote passed in 2016. Then there was Trump, who also got elected that year. There was a failed coup in Turkey while the leaders of Brazil and South Korea both got impeached and its northern neighbours kept firing very large missiles into the ocean. I’m not going to dwell on the effect that all of this could have had on brands and their advertising but the year of 2015 was one quite heavily filled with humour, silliness and a general urge to a be a bit cheeky. LBB’s Addison Capper summarises the best below.

A great idea is nothing without seamless craft, but sometimes there's a piece of lo-fi filmmaking that cuts through the sea of big-budget production. The Layzell Brothers, repped by Blink, pulled exactly that off here where their use of original CCTV footage of people shoplifting from Harvey Nichols' stores was widely shared online and picked up the Film Grand Prix at Cannes in 2016. Huge props to the adam&eveDDB for selling in this ballsy idea for a high-end department store. The footage further transcended culture when it was featured in T2, Danny Boyle's 2017 sequel to Trainspotting.

The one Christmas campaign from 2015 on the list isn't from a British brand. Leo Burnett Madrid and the Spanish Lottery smashed it out of the park with 'Justino', a beautiful animated story about the nighttime manager of a mannequin factory. He rarely gets to meet the daytime staff but gets creative with the mannequins to leave amusing and meaningful messages for the daytime staff. It really pains me to use the word heartwarming about a Christmas campaign - the festive battle for brands to warm hearts is steadily turning mine to ice - but this really does make me feel all toasty inside.

Gender fluidity isn't commonplace on TV today and was even less so in 2015. Which made this film for Shiseido cosmetics especially stimulating when it launched. The film artfully pans through the classroom of a group of high school girls before a twist unravels a truth - it is in fact a group of boys made to look like girls with the help of Shiseido products. On top of the underlying subject matter of gender fluidity, 'High School Girl' is simultaneously a meticulously crafted product demo. For that, we have Sho Yanagisawa of The Directors Guild to thank.

This was the most complained about commercial in the UK in 2015. It was also one of my favourites. I mean, what is not to like about 'Dave' indulging in the most epic of struts for an insurance comparison website before Sharon Osborne turns up for the performance that she was made for while carrying a Pomeranian. I'm sorry fun-sponges, but this one is deserved of its rightful place in this list. Traktor were behind the lens and creative was out of Mother.

Advertising is still trying to get its chops around the challenge of how to bring imagination to the prosaic YouTube pre-roll ad. The greatest effort to do so came in 2015 from US insurer Geico, The Martin Agency and Park Pictures' Terri Timely. The success of the campaign is down to its super simple, cheeky messaging. The bonus is that I could sit and watch that clumsy dog cause havoc all day.

Shot on iPhone is the type of bare bones, obvious product demo that only Apple could pull off. It's all beautiful imagery that you, the consumer, can create if only you owned this brand new sparkly Apple iPhone. The campaign, from Apple's long-time agency TBWA\Media Arts Lab, has serious legs - it's still rolled out prevalently today and was even used for one of Apple's two Christmas campaigns for 2019.

At the hind end of August 2015 an open letter appeared in the New York Times and the Chicago Tribunal. It was from Burger King and addressed to its most fearsome of rivals, McDonald's, and called for a 'burger wars ceasefire'. Burger King was proposing that on World Peace Day the two brands joined forces to cook and serve the 'McWhopper', which would combine the tastiest ingredients of each chain's signature burgers. A media frenzy ensued, as did a response from the CEO of McDonald's. He politely declined - for now - and expressed that "a simple phone call will do next time". This wildly successful idea has Kiwi roots, conceived out of the New Zealand office of Y&R. It's also the precursor to Burger King campaigns of a similar vein, such as FCB's 'Whopper Detour' and LOLA MullenLowe's 'Scary Clown Night'.

Sport England - This Girl Can

Firstly, the use of Missy Elliott's 'Get Ur Freak On' here is INSPIRED. With that out the way, some background for you. 1.75 million fewer women than men were exercising regularly in 2014. Exercise levels in general were rising but it was more so by men - women were worried about judged on their appearance during exercise. FCB Inferno was briefed by Sport England to get more women aged 14-40 to take part in regular sport and continue doing so. The result is 'This Girl Can', a hugely shared campaign whose central point was a film - with the aforementioned soundtrack - handled impeccably by Somesuch's Kim Gehrig. It reportedly inspired almost 150,000 women to take up sport.

Passersby of 'Survival Billboard' would be forgiven for thinking they'd wandered past a recent exploit of David Blane. It was actually a bold piece of branded entertainment by m:united/McCann London for Microsoft and Xbox and the launch of 'Rise of the Tomb Raider'. Situated in London, it pitted contestants against grueling weather conditions that were controlled by the voting public. After 20.75 hours, one contestant was crowned victorious. The highlight here lies within McCann's resourceful use of a slightly archaic medium of advertising - the billboard. The agency flipped it on its head to turn it into an entertainment channel and hijack the busiest period of the year for video game launches.

I mentioned earlier about how lo-fi filmmaking sometimes cuts through to be so much more than the sum of its parts. Well, Droga5 used found footage and nothing else for what turned out to be the most watched commercial of 2015. In fact, this film for Android one of the most watched and shared ads ever - the selection of interspecies friendship garnered 6.4 million shares and over 20 million views on YouTube. Easy to see why. I am all for orangutans hanging out with dogs.