The Berlin-based director on making the move from creative to filmmaker, signing with Mad Cow in the UK, and humour that can transcend cultures 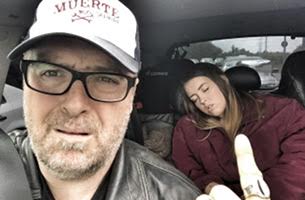 Greg Bray took up directing more out of necessity than temptation. As creative budgets kept quashing his ideas as an agency creative director, he took to directing them himself – and it turned out he enjoyed bringing ideas to life even more than devising them. His past experience gives him a unique outlook as a director; he knows the position of the creatives on the other side of the table and will fight tooth and nail for their original ideas to come through.

Husband to a German wife, New Zealand-born Greg is today based in Berlin, but directs ads in markets all across the globe. His work is rooted in comedy – perhaps no surprise given the brilliance of Kiwi humour.

LBB’s Addison Capper caught up with Greg over a beer to discuss run-ins with the Dubai police, comedic opportunities within the German market, and why humour can always transcend borders and cultures...

LBB> Tell us about where you grew up… how did you wind up working in advertising?

GB> I was born and raised in Auckland. I studied Visual Communication at a technical university there and two years into my three-year degree I landed a job as a writer with one of the “hottest creative agencies in NZ”… that my ‘professor’ happened to be the executive creative director of. He insisted I dump the course and work full-time for him. My first experience of honesty in advertising!

LBB> You’ve been a creative in various markets – can you give us a bit of background as to where and with who?

GB> My last position in New Zealand was with Lowe Auckland, when it was headed up by the incredibly talented Chris Knox and Stephen Pearson, working on Vodafone and Burger King. From NZ, I went to the Middle East for a stint with Leo Burnett and after being falsely arrested for a trumped-up traffic offence, I promptly buggered off to Berlin – perhaps the cultural opposite of Dubai – and partnered a half-mad Zimbabwean for 18 months. I then turned to writing and directing commercials.

LBB> Why did you decide to settle in Berlin?

GB> My wife was born in Bonn. So clearly, Berlin was the place to be and at the time was described as ‘The City of Cool’ by The Guardian. And they were right – no one gives a shit about what you do or how you do it in Berlin. You can screen print your dirty underpants and chuck them on a wall in a gallery, and people will come along, sip champagne and take a look (and sometimes lean in for a quick sniff).

I love that about Berlin. Due to the nature of my work, I travel a lot, and it’s located in a place that makes it easy to get everywhere. I don't shoot that often in the German market – although increasingly more and more – and the creative vibe in Berlin is really great.

LBB> What pushed you to move into directing from agency life?

After many years of trying to get great ideas produced, for a budget that was almost non-existent, I ended up directing many of my own scripts – and unsurprisingly I found I loved it more than actually coming up with ideas, for a variety of reasons. It was fun, one thing lead to another and I fell in love with the whole process. The casting especially – I love to cast memorable and unique characters! This is perhaps one of the parts of my job I love the most.

LBB> How do you feel your previous experience as a creative affects your work and approach to directing?

GB> Mostly with the considerable empathy I have for the agency creatives, who have succeeded in getting their idea to this point of production. I identify deeply with disillusioned creatives who have literally been through the wringer trying to create and sell their ideas. And now, finally, they’re sitting in a PPM with a client whose singular objective (most of the time) is to water the idea down and make it as ‘safe’ as possible.

I’ve spent many years on their side of the table. I’ve been that CD sitting opposite me and I know how disheartening this process can be. I fight vehemently for good ideas, I stand up for the creatives, support their original ideas (and when appropriate, have no compunction whatsoever telling them their idea sucks – but am always sensitive in suggesting alternatives). This delicate balance is usually very successful, until the client is on board… But then says: “Yes. But – lets shoot a safe version as well…” and that’s generally, quickly followed by the biggest lie ever spoken in a PPM: “We won’t use it … but let’s shoot it just in case”. Yeah, right. I really try to push for the script’s originality, to create the best possible interpretation of what both the creative and the client can agree on.

LBB> You mainly work with comedy – why do you enjoy exploring humour?

GB> I grew up with parents who had a highly developed sense of humour. My father in particular was a raconteur capable of making people laugh out loud at virtually every story he told. I feel compelled to continue a strong family tradition, and whilst many people have a special skill for telling a joke, most people have an innate love of hearing a good joke well told.

I love comedy because it allows one to explore the absurd and be more adventurous; make stuff that entertains as well as communicates effectively, because any communication that is amusingly memorable will always be remembered more readily than any message that, regardless of importance, is dull.

To push the boundaries and get deliberately absurd or obscure is to discover something new. The great work being done by brands like Old Spice, Geico, Little Ceasars or Direct TV, is memorable and entertaining, entirely because of its comedic nature. When you create commercial comedy, people either love it or hate it – but either way, the brand is talked about, as opposed to not being talked about. I’ve recently produced a campaign that polarised people due to its absurdity – I love that. It was loved, hated and discussed massively – what more can you ask for?

LBB> How are the opportunities for comedy in the German market?

GB> There is some really great comedy in this market - it’s just sometimes extremely hard to sell it to clients who aren’t used to laughing at themselves. A great many German marketers can be characterised by fear. Their preference for ‘playing it safe’ undoes many a potentially comedic commercial. There’s always great laughter directed at the latest Old Spice commercials for instance – they share them with their mates and colleagues – but a client’s ability to actually BUY such an idea, is sadly very constrained.

I strongly believe that there are some brave brands in the German market who really believe in the power of humour in creatively expressing their message. There are some great agency / client partnerships where the brand has complete faith in the power of humorous creativity, and they have reaped the rewards of humour in their advertising. Heimat’s Hornbach campaigns, or Jung von Matt’s Edeka campaigns for example. Or DOJO, in Berlin. They all really push humour and, more importantly, they sell it through to their clients. They’re all doing great work, pushing the boundaries and, in the end, being very well rewarded for it.

I am seeing more and more humour-based scripts in the market, and I am ever hopeful that the bravest marketers in the German market are indeed seeing the value of comedy and standing out from the pack.

LBB> You’ve directed ads in Europe, Asia, US and UK – how tricky is it to ensure that you’re tapping into the relevant market? Comedy can be particularly cultural – or is it more universal in your opinion? How does your international work as a creative help out here?

GB> Comedy is a universal language: a medium in which language is inevitably a bridge to understanding it. Of course, certain cultural nuances must be observed in different markets, but comedy is much more about timing, delivery and what every being on this planet finds funny. Working numerous markets globally has taught me that you can gain a uniquely comedic perspective to any and every market – at the moment you understand their culture. This is the key and I try very hard, always, to learn, absorb and develop an approach in which the audience is an active part of the joke.

At the end of the day, funny is funny and funny, and gets talked about, and gets shared – in all markets.

LBB> You’ve recently signed with Mad Cow for UK representation – why were they a good fit for your push within that market?

GB> That ‘push’ you mention was indeed an accident and I have excellent lawyers. I honestly didn’t mean to bump that girl in the behind when she bent over to retrieve her sandwiches, as we were squeezed together on the underground from Covent Garden to Kensington Gardens and the driver suddenly braked. The court case only comes up next Wednesday, so I’m not sure why you’re asking this… sorry sidetracked… where were we?

The UK yes. The UK is, in many ways, the home of humorous advertising and I felt it was very important to have a presence there. I really like Pete [Chambers, EP, Mad Cow Films] and the team at Mad Cow, they’re well established and have a great history when it comes to comedy. I talked with Pete earlier in the year, as he was just in the throws of re-launching Mad Cow and getting back to its roots. The talk was great and what Pete said made a hell of a lot of sense to me, and so in July we decided to give it a go!

LBB> How’s it going with that move?

GB> It’s moving! Things are happening, and Mad Cow is out there pushing which is great! We had a few scripts through, the reel is doing the rounds of agencies in the UK, and I’m planning to go over and have a pint with Pete and the team as soon as possible.

LBB> Are there any other formats you’d like to work on?

GB> I’m developing a couple of longer format ideas – I have a friend who’s involved in the TV series industry in the US and we have a couple of things in development at the moment. This format really interests me. TV series are the new king, and with channels that have become creators, distribution has become easier, and therefore the opportunities more accessible. I also see the process a bit like making commercials – it’s fast paced, quick in turnaround and you have something to ‘look at’ relatively quickly. This is something that I’m woking on apart from advertising.

LBB> What do you get up to when you’re not directing?

GB> Spending time with my family mostly. I travel a lot, so when I’m home I’m trying to spend as much time with them as possible. I also I work on my other projects as I’ve mentioned above. Apart from that, I was an avid breakdancer in my youth, and I spend my time looking at old VHS tapes my dad shot of me doing legendary moves such as The Windmill, The Jackhammer, Hand Hops and the Deadman Spin. Or my own signature move (to which I sustained my career ending injuryto in ’92), The Electric Bugaloo.

How to Build a Personalisation Strategy Embedded in Creativity

‘Por La Cultura’: How the NFL Is Celebrating the Game’s Latino Community
View all News

Bastille 'Give Me The Future'