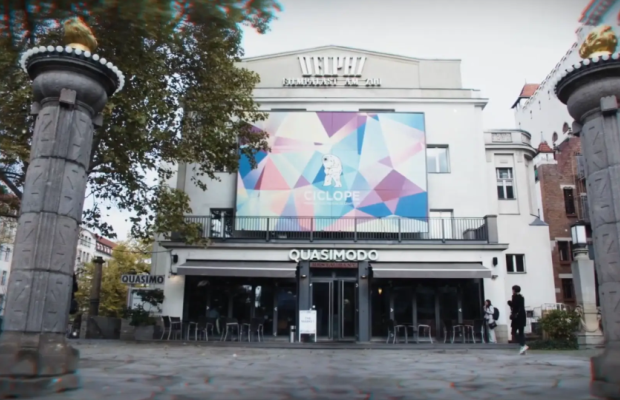 CICLOPE Festival is one of the most loved events on the ever-crowded advertising conference/awards circuit. Celebrating its 10th anniversary in Berlin last week, the event is billed as an international festival of craft - a hugely important part of the industry that is often overlooked at other shows. On top of its focus on the production side of adland, CICLOPE is also adored for its intimacy and knack for billing presentations with an actual story to tell. In four trips to the festival, I’ve never felt like I was sat through a sales pitch.
You can check out the winners of the awards here - including the six Grands Prix winners - and I’ve summarised my personal highlights from the conference below.

Chad Hopenwasser is a self-proclaimed big man. His documenting of so is my new favourite thing on Instagram. The chief production officer of Anomaly was on stage chatting with David Rolfe, BBDO’s director of integrated production, about Life as Big Man, his self-produced video series on the spirit and restraint of gluttony. But aside from the humorous aspects of their discussion and Chad’s videos, this was an important conversation about the peculiarities of creating social content - the production values, the differing ratios, the sheer amount of the stuff. He said how he’s always shot masses of video footage but in the past rarely made anything of it - it was always random video footage and nothing more. But he believes that we’re getting into the “real age of actually telling stories with it”. He added: “If you look at Tik Tok, it’s amazing that they’re telling 15-second narrative video stories.”

Dosist - A Different Side of Cannabis

Mike Byrne, the CCO of Anomaly, opened his presentation with a light dig at Hollywood. In his eyes, the movie industry has done its utmost to make smoking cigarettes a particularly cool activity, while smoking cannabis is reserved solely for goofballs. With the increasing level of legality of the drug in the US, Mike was keen to show a different side of cannabis to the CICLOPE audience. His case in point was Dosist, a cannabis product that he and Anomaly created and launched that prides itself on “delivering health and happiness”. He outlined how Dosist is the first and only company that combines precision dosage and formulations when it comes to cannabis consumption. “It’s the precise combination that leads to efficacy and product and experience superiority,” he said. Mike’s talk went on to explain how Anomaly created the entire product platform, brand, supply chain and culture for the brand by changing things like the terminology often associated with cannabis (which you can see in the slide below). It’s a formula that seems to have worked as Dosist now employs around 200 people and was named one of 2016’s best inventions by Time Magazine.

Honesty and Humility from Miles Jay

Miles Jay’s early career put him in fear of being pigeonholed somewhere he didn’t want to be stuck. The Canadian director’s filmmaking life kicked off with a slew of high-concept (and admittedly highly popular) interactive videos. But it wasn’t the space that he wanted to operate in and eventually, after being an “asshole” 24-year-old (his words), he realised the importance of an honest emotional connection to his work. Now repped by SMUGGLER and with all manner of awards under his belt - including the 2018 Grand Prix for Entertainment at Cannes Lions for Jay-Z’s ‘Smile’ about the rapper’s lesbian mother - Miles documented his career from its early days to today, demonstrating how not over-planning your creativity and thinking “less” is only ever going to be beneficial for your output. Two snippets I particularly enjoyed were “confidence comes from connection” and the simple notion that “directing is [either] chaos or incredibly simple”. Check out some of his work below.

Behind the Curtain on Traktor’s Process

Traktor's appearance at CICLOPE was billed as an interview about the collective's recent project for Lego, 'Rebuild the World'. In reality it was more of an overarching dig into their recent catalogue - and was all the better for it. On top of hearing about the creative vision behind campaigns such as 'It's a Tide Ad' and the aforementioned 'Rebuild the World', the pair of Traktor representees on stage revealed details about how they work as a collective, which is something I've always been intrigued with. Apparently it's all really quite simple. Whoever likes a script the most gets to shoot the commercial - they would never all work together on set. If there's a particularly fruitful-looking script then it's down to a simple game of rock, paper, scissors. They had a match on stage but it turned out to be a draw. Make of that what you will.
The chat finished with a screening of their Argos Christmas spot. Seeing that on the big screen made me happy. Just after I popped to the toilet and stumbled upon Traktor having a chinwag with attendees in the midst of going about their business, which is an odd little moment from the festival that stuck with me. It's CICLOPE's intimacy that's its biggest strength. It's manageable, you never feel sucked into vortex and as a consequence it feels possible to really take something away from, whether it be knowledge from the presentations, connections with new clients or both. And there's always the chance of running into some legendary directors in the toilet.