While icecaps are still melting, sexual harassment is still rife and women are still far from being valued equally to men, LBB’s Addison Capper celebrates some creative lighthouses amid these storms 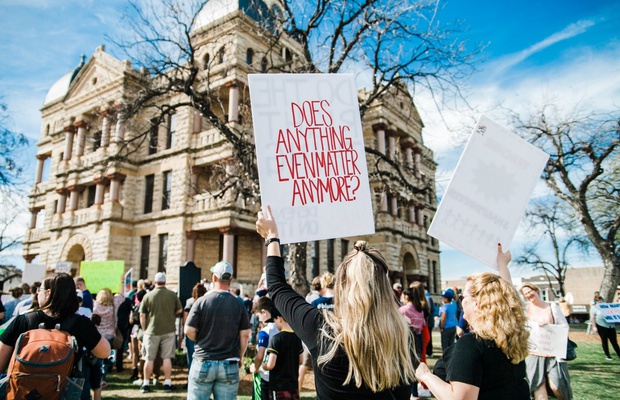 The sad thing about champions of change is the need for them in the first place. But the world is indeed in need of change and our industry can play a significant part in making it happen. The climate is in a state of emergency - ‘change’ not being a strong enough term to explain the state we’re in - and equality in every form is still something we’re some way off from achieving. But there are a lot of good people in the advertising industry - people determined to transform society and make it fairer, safer and better. LBB’s Addison Capper rounds up our top champions of change for 2019.

Unsatisfied with world leaders’ actions on the climate emergency, Extinction Rebellion took matters into its own hands in 2019, exercising nonviolent civil disobedience to convince those in power to take action. Its targets weren’t confined to politicians - the ad industry rightfully took its fair slack of slack too. The activism group stormed Cannes Lions, protesting on the Palais’ red carpet steps on the festival’s Wednesday afternoon before doing the same on Facebook’s beach - and being dragged away from it. The group’s targeting of brands and agencies could be in part due to a number of its members also being representatives of the ad industry. William Skeaping, a senior activist with Extinction Rebellion, used to be a strategist at McCann London. In September he told my colleague Adam Bennett: “I used to feel like advertising was this really huge opportunity to use a lot of money to do good... But it quickly turned out that advertising is not where the party is right now for this sort of thing.” You can read the full interview here.
What’s more, the Dutch advertising community also rallied together for the Creatives for Climate Summit in September, which featured Extinction Rebellion speaking along with Patagonia, agency Native Circles and impact-driven thought leadership agency The Humblebrag. The summit brought together 140 key stakeholders to drive action and in just a few days led to more than 20 local companies, including HALAL, The Brave New Now, HarrimanSteel, Eyeforce, Revolver, Iris, Nomads and The ADCN (Art Directors Club the Netherlands), signing onto the newly launched Creatives for Climate platform to collectively declare an emergency.

After launching Free The Bid in 2016, founder and director Alma Har'el marked 2019 by launching the souped up, next generation of her industry-changing nonprofit initiative. Whereas Free The Bid was a platform for finding female talent, Free The Work extended its efforts to increase the number of women, trans identifying, non-binary and underrepresented creators involved in all aspects of filmmaking. What's more, on top of being aimed at advertising agencies, Free The Work is also open to TV networks, film studios and brands. Users of the platform can track quantifiable results for their diversity efforts across industries with a customised dashboard, while personal accounts and shared playlists give it an air of Spotify or IMDB.

On Labor Day (September 3rd) of this year, Daniel Kwan - one half of directing duo The Daniels - posted a thread on Twitter highlighting the unfair working conditions of music video directors. His post, which drew upon issues such as directors' lack of union, foregoing payment and unpredictable pitching process, struck a chord with many of the industry's brightest filmmakers, including David Wilson, Ian Pons Jewell and Norton, who replied with messages of support. The exchange led to the conception of WeDirectMusicVideos, something that Kwan hopes will be "a real, honest-to-God music video directing community" - somewhere that that community can collectively push for change. Daniel spoke to my colleague Laura Swinton about the initiative. Go check it here.

timeTo launched in March of 2019 but an issue as deeply rooted in our industry as sexual harassment sadly can't be solved overnight. In fact, while the industry task force is beginning to see progress, a survey by the Advertising Association in October revealed that 9% working in the industry had been sexually harassed in the 12 months prior. timeTo has staunchly kept up its messaging in 2019 with smart campaigns by Lucky Generals launching around key events on the advertising calendar, such as Cannes Lions and the seemingly unavoidable (at least in the UK) Christmas party. We applaud the efforts of timeTo but hope that their work is soon redundant.

Following the scandal of the 'League of LOL' (an online group of French sexist and bullying journalists and ad men), Christelle Delarue, the CEO of agency Mad&Women, and a group of fellow ad women launched Les Lionnes (The Lionesses). Boasting circa 200 members, the group is determined to highlight the working conditions in French advertising agencies in order to foster a 'New Deal' for the industry. Over the night of June 5th to 6th, members of Les Lionnes posted testimonies of women victims of sexual harassment on agencies' walls before being stopped by police. During Cannes they set up an 'off' festival where they gave equality awards to the most deserving campaigns, with the ceremony dubbed The Cannes Lionnes. Since then they've continued to collect anonymous testimonies from women and confront agencies where abuses are reported, demanding a response to allegations.

The digital age has led to an upsurge in brands focusing on short-term executions instead of long-term brand building. Les Binet and Peter Field are both long-time stalwarts of the advertising industry but the last year or so has seen them gain international traction for their in-depth research into the virtues and effectiveness of longstanding emotion as opposed to off-the-cuff messaging - something that brands seem to be coming around to again. There's much we can say about the work of Binet and Field that we do not have the space for here, but we implore to read ‘Marketing in the era of accountability’, ‘The Long and the Short of it’ or ‘Effectiveness in Context’. The Guardian dubbed their work as “compulsory reading for all serious scholars of marketing”.

Launched at Cannes Lions in 2018, the Lion's Share is a simple but powerful initiative founded by Australian production company FINCH and director Christopher Nelius, who is on its roster. The idea is that if a brand is using animals in its campaign - be they real, animated or CGI - they give a small percentage of their media spend to the Lion's Share fund, which puts it back into finance wildlife conservation and animal welfare projects. It's backed by the United Nations Development Programme and has close support from Clemenger BBDO, Sir David Attenborough, Mars, Nikolaj Coster-Waldau (Game of Thrones’ Jaime Lannister) and lots more. The Lion's Share ramped up this year when it won the Cannes Lions Sustainable Development Goals Grand Prix, and Christoper and Michael Hilliard, an executive producer at FINCH, addressed a special conference at the 74th United Nations General Assembly in New York to discuss the significance of their initiative The Lion’s Share in harnessing advertising to do good. Check out the presentation here and read more about the initiative here.