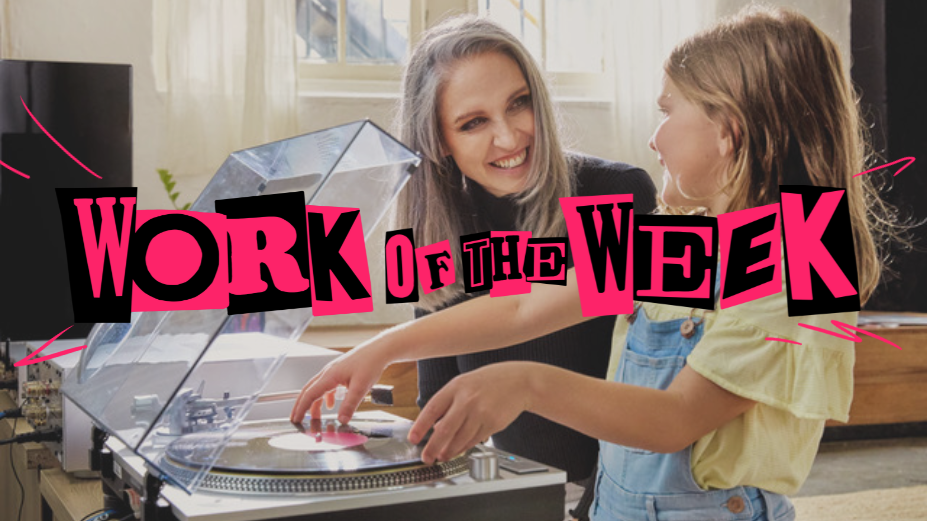 British rapper Stormzy has finally returned with his first solo track in three years and he leads this week's selection of the best creative work. His video for the song ‘Mel Made Me Do It’ has the powerful imagery imagery we've come to expect from Big Mike and features cameos from icons like José Mourinho, Ian Wright, Louis Theroux and more. This week's top work also includes more musical moments, such as an intergenerational love letter to vinyl from audio equipment company Technics and a throwback to the early ‘70s glam rock era for the British Heart Foundation's latest rock n roll call to action. This final work of the week roundup for September also features some truly surreal spots that aren't afraid to get a little bit weird. Special Group Auckland teamed up with Scoundrel to create the dreamlike 'Summer Never Sleeps' campaign for New Zealand’s outdoor brand, Kathmandu. Shot on 16mm film, the weird yet wonderful film uses a colourful mix of a different media, tones and textures to create a bonkers adventure that has some surprisingly beautiful cinematic sequences amongst the bizarre.
Continuing with the quirky, this week's picks also include a giant Cara Delevingne using a city like a playground for G-Star’s RAW denim clothes line and Samsung’s new disruptive global campaign from Wieden + Kennedy Amsterdam that features a flip phone you just can't get out of your brain. To round off the selection we’ve also included a campaign that uses the videogame 'MLB The Show'  to immortalise a 1930s baseball team that overcame discrimination and the era's other challenges.
See all of the campaigns below!

Stormzy - Mel Made Me Do It

Read more.
Independent full-service agency Awaken showcases the evolution of Technics' audio hardware and of a woman's passion for music through the ages. The spot takes us from the ‘70s when the company launched its first turntable, to now, following the musical journey of a woman through her life. From a preteen in the ‘70s opening her first vinyl record, we see the protagonist go from DJing at a house party in the ‘80s, to listening to her portable CD player in the ‘90s and now being a cool grandma gifting a vinyl to her granddaughter for the first time. Each era has its own visual and audible character that brings each moment to life with a variety of filmmaking styles and sounds.

Read more.
Ontario Lottery and Gaming Corporation (OLG) partnered with Major League Baseball (MLB) to immortalise the 1934 Chatham Coloured All-Stars in a unique way - preserving the memory and story of the team within the popular baseball video game, MLB The Show 22. The 1934 Chatham Coloured All-Stars were the first all-Black team to win an Ontario Baseball Association Championship and so to shine a light on these important historical sportspeople, OLG created a short film about the challenges that the team overcame and honoured them with a virtual version of the squad.

Read more.
'Summer Never Sleeps' follows a group of friends adventuring sleeplessly day and night through beautiful countryside - and into bizarre dreamscapes. Pillows become campfire marshmallows, nocturnal animals become the group’s best friends and sheep nod off while counting humans. The surreal story was brought to life by Special Group Auckland and Scoundrel, who shot on 16mm film and used a colourful mixed media aesthetic to create the bonkers adventure, featuring a fox-headed man, an owl DJ and some surprisingly cinematic sequences.

Read more.
In something of a Godzilla fever dream, a gigantic Cara Delevingne is joined by other towering models as she swings on skyscrapers, crouches on condos and takes a breather on a bridge. Set to the somewhat eerie but nostalgic sounds of Portishead, Stink Films director Felix Brady captures a mind- and world-bending experience which embodies the tough and truly original attitude of G-Star's RAW denim clothing line.

Samsung Galaxy - Join the Flip Side

Read more.
The campaign from W+K Amsterdam is designed to elevate Samsung’s appeal with trendsetters and customers coming to Samsung from other brands. After seeing a friend’s Galaxy Z Flip4 the protagonist attempts to convince herself she is happy with her phone, but eventually acquiesces when she can’t stop noticing things that flip and fold in the real world - from castanets to books and fridge doors.
view more - Work of the Week