What Adland Could Learn from Y&R Hungary About Creative Bravery 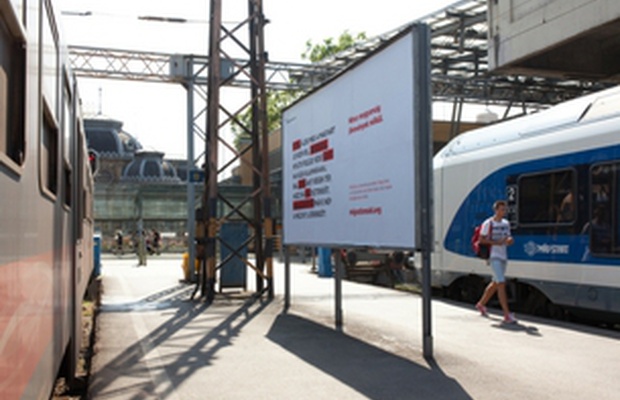 ‘Creative bravery’ is a phrase bandied around so frequently and flippantly in the advertising industry that it’s almost become meaningless. Y&R Hungary, however,  have shown true bravery in their project ‘Migrant Anthem’, a campaign to combat government- and media-fuelled hatred of Syrian refugees. In the context of Hungarian society and politics, the project makes a stand and is genuinely brave. The far-right has been on the rise for years – see the growing popularity of the extreme nationalist party Jobbik – and in 2016 the government took a hardline stance against refugees and migrants, while the media inflamed hatred.
The agency sought to remind Hungarians that they are a nation woven from many cultures and successive generations of migrants. The Migrant Anthem saw them analyse the Hungarian anthem and remove all of the words that are rooted in foreign languages. Without these ‘loanwords’ , the anthem ceases to make sense.
The campaign split the country. On the one hand, it inspired donations (including one donation of €30,000), allowed the charity Migration Aid to take refugee children on a summer camp. On the other,it rendered the trenchant nationalists apoplectic with rage and put the agency in the firing line. Nonetheless they pressed on, in the knowledge that Migrant Anthem was most definitely the right thing to do.
LBB’s Laura Swinton caught up with Y&R Hungary’s ECD Laszlo Falvay to find out more.
LBB> Can you explain to me how the anthem project came about? Was it in response to a particular client brief or was it something that came from within the agency?
LF> Back in 2015, when the first wave of migrants arrived, many people wanted to help, including our agency. We put together aid packages for those who were in need at the borders and around railway stations. In the following years, sentiment against migrants became stronger and the government took a stance against the EU quota recommended for taking in people fleeing from warzones and oppression. People started turning away from helping migrants and started to be afraid of them. So instead of sending more food, we decided to help in another way, with a campaign helping their integration.
LBB> Can you describe what the idea was and what the execution was?
The basic sentiment, fuelled by the media, was that if we let the predominantly Muslim migrants in, not only do we invite terrorism into our homeland, but we also water down our Christian, historic, Hungarian culture. We stated the opposite: the Hungarian identity and culture is strong, because for centuries it withstood the test of time. We have been occupied by different nations for hundreds of years and because of that our culture just became stronger and richer. The biggest proof is our language, which consists of many foreign words taken from other languages. Each of these words just enriched our vocabulary. We took the words from the Hungarian national anthem and turned them into posters and a web-based 'engine' that started a debate. 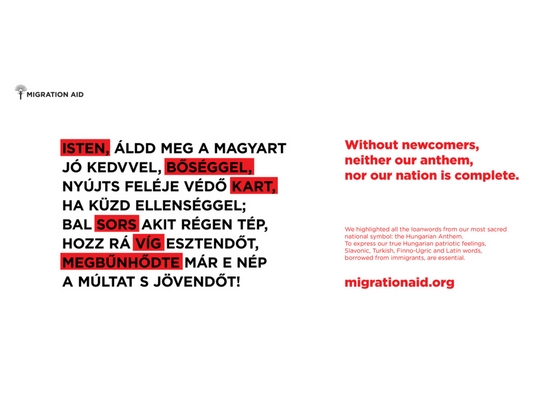 LBB> If so, what sort of research did you have to do?
LF> We found an analytic study of the anthem by professor Andrást Róna, but of course that was just a handful of words, and we needed all of them. So, we took an ethnological dictionary and one by one, collected all of them. This database became the library of our “highlighting engine” used by news portals. Based on this library, every news article which contained foreign words was highlighted on the webpage.
LBB> Why was the project important in the context of Hungarian politics and society?
LF> The campaign was important in a societal context. As most media outlets were out to spread fear amongst people towards migrants, we thought it would be wise to take a step back and look at this from another angle. It was more of an education and a history lesson that put migration into a wider cultural context. We wanted to create a balance in the communication of this subject.
LBB> When did the project launch? And who were the key people involved in the agency?
LF> The project launched when a new wave of migrants started to flow to Hungary, in June. Creative groupheads Boglarka Onody and Marton Kenczler were the key creatives on the project, but many others were involved as well.
LBB> What was the reaction like from the public?
LF> It was quite mixed as you might guess. Some media outlets attacked Migration Aid immediately, and falsely connected the organization to George Soros [the Hungarian-American financier has criticised the Hungarian government and his university in Budapest has proven to be a flashpoint for the debate, with the government attempting to shut it down. It got an extremely heated reception on social media once the news portals started talking about it and sharing it. Some called it blasphemy, but others gave a more positive feedback, and many took action and donated for the cause.
LBB> I know there’s been some controversy. It’s funny, in advertising we talk a lot about creative bravery but it’s usually just empty words – in this case the team really was being brave. What motivated you to keep going?
LF> You’re right, it was not an easy decision at all. The people responsible for spreading fear have probably never met migrants who have fled their homeland, but we have. We have very good friends, who came to this country and made it a better place. We were brought up in open and embracing cultures where different creeds, colours and races were interesting and normal. We felt we had to protect that.