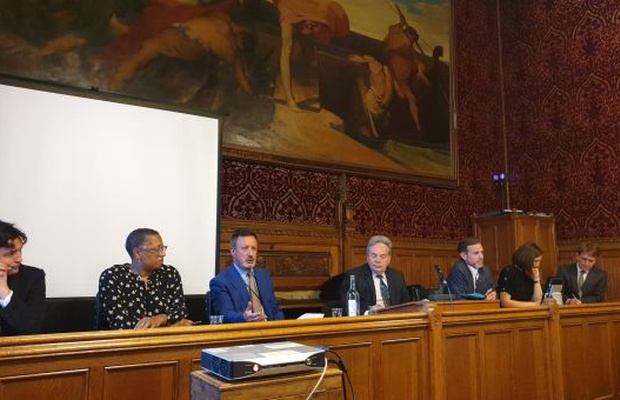 “We’re a bit delayed because of the… nudity.”
This week’s debate on the future of the British advertising industry post-Brexit got off to a surprising start. Speakers and audience members were delayed not by the scrum of national press eager to glean the outcome of Parliament’s second round of indicative votes, but by a gang of ambitious climate change protestors who attempted to superglue themselves to the public gallery in the House of Commons. Yeah. Superglue.
From the off, this wasn’t going to be your usual ad industry panel discussion. Hosted by The Debating Group, a parliamentary forum for media and marketing debate, the session pitted the APA’s Steve Davies and Grey London’s Sarah Jenkins against Bloomberg Intelligence’s Matthew Bloxham and Future Factor’s (formerly Finch Factor) Sarah Taylor. The event was jointly sponsored by UK industry body, the Advertising Association, and the International Advertising Association. Following the strict format of a formal debate, the two sides tussled over the motion, ‘Despite Brexit, the UK will be the pre-eminent advertising hub on the world stage for years to come’.
In the opposing team Matthew Bloxham drew on a mix of data and football analogies to argue that Britain’s creative star would wane post-Brexit, while his teammate Sarah Taylor cited her own experience working in Amsterdam to highlight a sense of ‘introspection and arrogance’ of the UK industry to suppose that there is something particularly ‘British’ about creativity.
Arguing for the motion, the APA’s Steve Davies carefully detailed the many unique properties of the the British industry – its culture, people and infrastructure – and emphasised the growth in advertising sector exports since Brexit.
But it was Grey London’s CMO Sarah Jenkins who really turned up the passion with a truly quotable argument full of stone-cold solid gold.
“I’ve got creativity on my side – and creativity will power through the coming uncertainties,” she said. “I do not think British advertising is too big to fail; I think it’s too creative to fall.”
Although a Remainer, she said that already the uncertainties of Brexit were sharpening the instincts of UK creative agencies and forcing them to battle bloat. “We don’t slow down when things get hard, we get better,” she said. “Being creative means we’re very competitive. We like the fight.”
And pointing to the many initiatives to broaden access to the industry, she reckons the UK talent pipeline is finally becoming more diverse. “I can say, hand on heart, we don’t have a talent problem in this country, we have a talent opportunity,” she said.
Alas, quotable and totally motivating as Sarah proved to be (seriously, it was almost enough to turn me into an optimist… almost), the floor voted down the motion. Unfortunately, it seems that Theresa May and the hardline Brexiteers didn’t get wind of some of the stellar arguments ahead of the indicative votes and decide to put Brexit on hold (“Guys! We’ve just got word – the British advertising industry isn’t looking forward to Brexit… let’s revoke Article 50 ASAP!”)
And while I couldn’t quite shake off my Eeyore-ish tendencies and also voted against the motion, I would advise any adlanders suffering from pre-Brexit anxieties to hook up with Sarah for a pep talk.