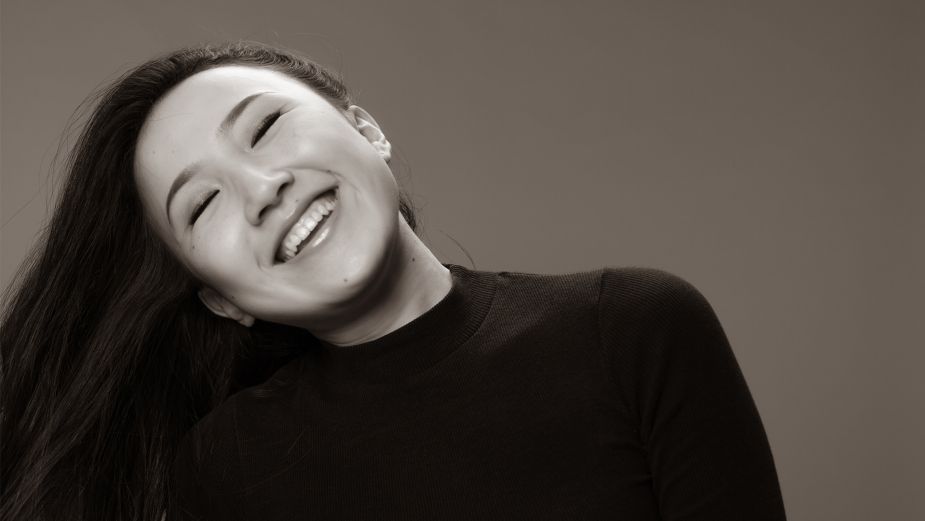 Now an art director at Droga5, Eunie Jang’s first name comes from the word ‘unique’, and it’s safe to say that is an appropriate description of her experiences so far. Growing up in Seoul and attending an international school, the Korean American creative has had a truly global upbringing and experience, visiting family around the world, travelling with her parents and eventually living in Boston, London, Dubai and New York for varying amounts of time.

It’s this well-travelled history that has helped to foster her curiosity and inquisitive nature. “Whenever I meet someone new, the first question I ask is how did you get here? It’s fascinating to understand how people from such different walks of life cross paths to share a moment together. Every connection feels special.”

Her curiosity about people and the world fuels her creative thinking. She’s always had an itch for creative expression, and her parents helped her explore a variety of outlets. From painting to figure skating to piano to skiing, dancing, rollerblading and more, she got to throw herself into the mix of various creative forms. Always artistic, she says that she routinely got into trouble for “hoarding” items to craft with or doodling too much in class. “My mom told me there was one time when she saw me trying to build some sort of tower out of paper scraps and thought, hopefully, there’s something out there where I can make things for a living. Because I couldn’t stop making things. Turns out that thing was going to be advertising.”

After discovering Photoshop and Illustrator at high school and putting her skills into practice with the school newspaper and magazine, she continued her creative pursuits by studying advertising at Boston University. Despite growing up “in the intersection” between Korean and American cultures, she experienced a significant culture shock upon starting her further education journey. “I never experienced racism growing up until I moved to Boston for college. Going from being the majority race in Korea and being sheltered by relatives in New Jersey, to being labelled as a minority and others in the US. My college thankfully had a lot of students from abroad… I got to make a lot of friends from all over the world. The culture shock made me appreciate my background even more, and deepened my value for diversity.”

Unfortunately, the young creative graduated into a global pandemic and realised that her portfolio was not as competitive as she had hoped, compared to graduates from other educational advertising institutions. Eager to get her hands dirty at a creative agency, she came across an opening at Droga5 for a diversity and inclusion coordinator, which she was successful in landing - partially helped by her previous experience as an MAIP intern.

During the first steps on her new career path, Eunie learnt a valuable lesson about patience that would influence her throughout her development. “I’m an ambitious person, and when I really want something, I get really eager. I learned that even when you put in the work and the time into something you want, you sometimes just have to wait until things happen. Things don’t just happen overnight, or over days, or even weeks or months. I learned that patience paired with hard work always gets you places, even if it may take longer than you initially had hoped.”

Although she took these learnings to heart, she certainly didn’t sit on her hands when starting out at Droga5. As one of three people in the D&I department, working alongside senior leadership during the tumultuous 2020 nationwide racial awakening in the States, she learned the inner workings of the agency incredibly fast. She felt the desire to go beyond coordinating internally and aspired to make an impact on public-facing client work as a creative.

Initially, she was told that transitioning into the creative department would be impossible because it was too competitive without a portfolio degree. But, being a former Korean national team cheerleader, her self-belief, ambition and trust in the process of hard work was resolute. 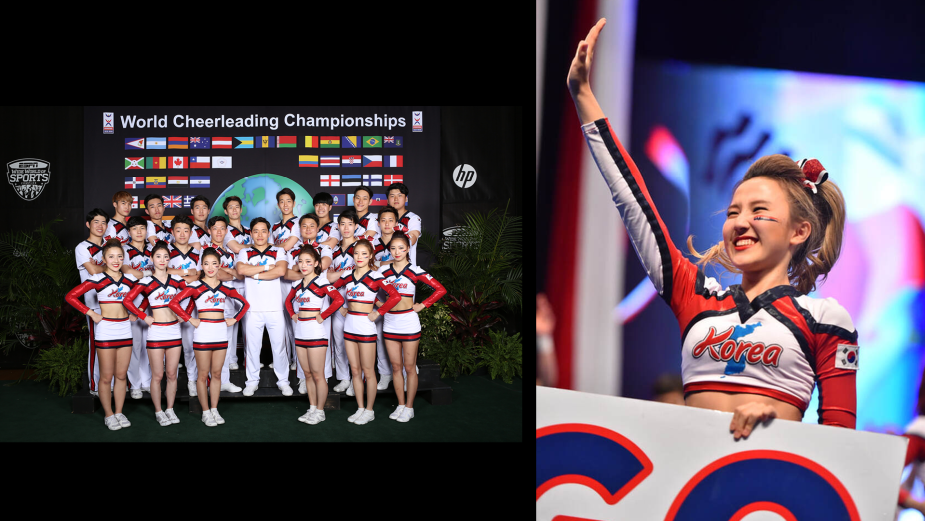 To prove her drive for becoming a creative, she volunteered for every creative opportunity within the agency, networked with creative directors and landed a spot in the D5in10 program, Droga5’s portfolio crash course. At the end of the program, Eunie got to present her work in front of David Droga, who hailed it as ‘absolutely brilliant’, and she landed an art director internship at Droga5. After interning on clients’ projects including The New York Times, Reform Alliance and more, she pitched herself to the Droga5 CCOs and was offered a full-time art director role. Reaching this position via a truly ‘Eunique’ route, she persevered and overcame the odds to realise her aspirations.
“On the call when the CCOs gave me the full-time creative offer, I started bawling my eyes out. Our creative recruiter was also on the call crying with me. She was one of the first people I had told about my dreams, and she realistically told me that it would be very hard to switch departments into creative. She was proud to see me achieve the impossible.”
Getting the opportunity to pitch in front of David Droga was a significant moment for Eunie, who has looked up to the agency’s founder since entering the world of advertising. “When I first heard about him, I went down on a rabbit hole on the internet, watching every keynote speech he’s ever given, reading every interview he’s ever done. I was infatuated by this person who was not only successful early on in his career but also believed in himself to take the risk of leaving everything and starting his own agency. And making the most iconic works of all time. The way he thinks and speaks is inspiring.” She continues, “I remember being so star-stuck when I saw him for the first time during an all-agency meeting. His charisma is really something else. One of the big reasons I work at Droga5 is for my admiration for David. You can only imagine how I felt when I got to present my work directly to him and have a chat.”
Eunie kicked off her creative career with the ‘ADCOLOR 2021 Pull Up for Accountability’ campaign with its launch film and event assets. This was the public-facing impact she’d dreamt of making, as her work supported the conference that champions creatives of colour. Due to pro bono client budget limitations, only a limited number of designers could be sourced externally for the project, so Eunie raised her hand to design out of scope; even without funds, she was determined to make the campaign thrive.
In her design, ‘Pull Up’ is interpreted in a visual form of Konglish–the combination of Korean and English. The Korean translation of ‘Pull Up’ reads ‘Let’s go together, fighting’ with the Korean alphabets simultaneously spelling out the English phrase. 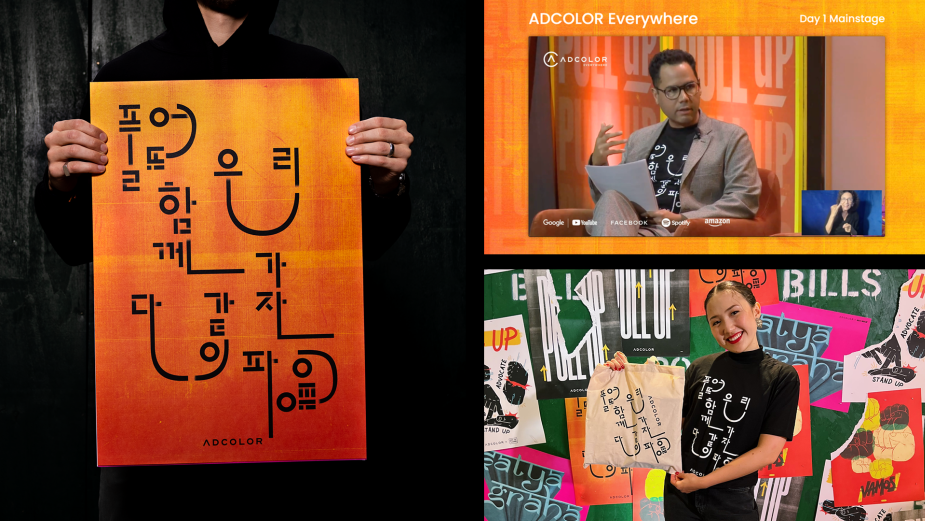 The design was the fastest item to sell out at the conference, which facilitated conversations with other Korean American creatives who shared how special it was to have their voices represented through her design. It was so well received that the agency leadership produced more to gift to the entire agency. Most recently, she wrapped her work for Good Good, a new pet wellness brand under Central Garden & Pet that her team helped build from the ground up. From the brand name to the launch film to social content, Eunie got to be part of the full brand launch, her biggest project yet.
Though she is still early in her career, she has been successfully establishing herself as a standout creative who brings value to the team. Breaking the limitations of what a young creative can achieve, she was selected to travel internationally for the Good Good film campaign shoot. Currently, she is working on Levi’s global campaign for the 150th anniversary of the 501 denim, a highly prized brief from an exciting new business win for the agency. After a competitive team selection process, Eunie is very excited for the campaign that will launch globally, including in her hometown of Seoul.
Beyond her client work, she serves on the board for Hyphen, Droga5’s AAPI affinity group, where she leads agency-wide initiatives. For this year’s AAPI Heritage Month programming, the committee came up with the theme ‘See Us’, an unapologetic declaration that promoted visibility, joy and pride for a community that’s often made to feel small or invisible. Here, she moderated the all-agency panel, where she hosted the Nam brothers - Eric, Eddie and Brian, K-pop stars and entrepreneurs - who shared their personal journeys and business successes with DIVE Studios and Mindset.
Beyond Heritage Month programming, Eunie and the Hyphen board lead difficult yet important conversations with the agency leadership. Last year, they had the first conversation to improve the AAPI employee experience at Droga5 following the rise of Asian hate crimes in the US. Following the presentations, the agency saw immediate support and change. From all-agency bystander training to increased leadership involvement, Eunie and the board cultivated positive change to help the community not only survive but thrive during hard times. 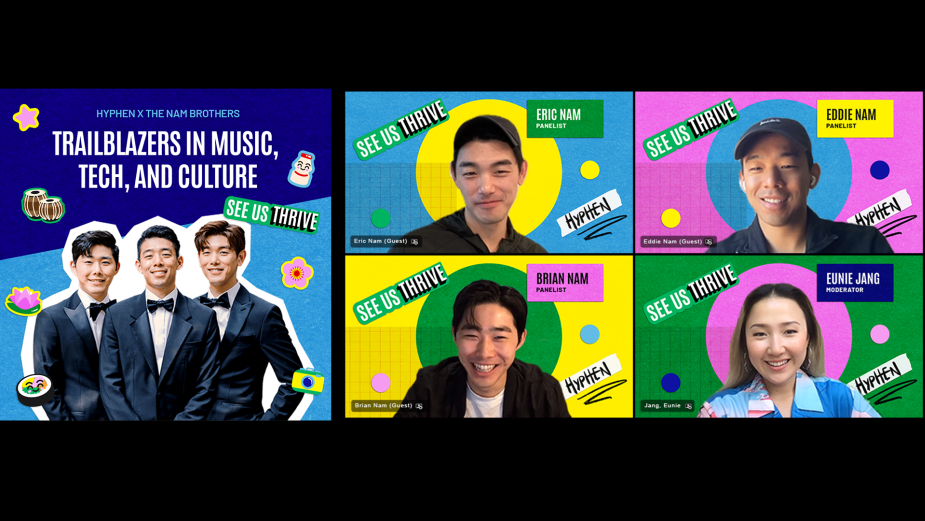 “Hyphen has been a safe space for me to meet people who share similar cultural backgrounds, people who I can share experiences with. It’s a special group where we get to share personal stories relating to our AAPI experience at the agency and in the city, but also just goof around and have a ton of fun with. I feel good knowing that I have a group of people at the agency who have my back. We went to karaoke a few months back which was a lot of fun. Let’s just say I sang Umbrella by Rihanna far too many times dancing on the table…”
Eunie feels grateful that Droga5 is ahead of the curve on D&I-related topics, acknowledging that while other agencies were “scrambling” to react to the Black Lives Matter movement, Droga5 already had a developing focus and resources dedicated to diversity, from the top down. “Many senior leaders have international backgrounds, and you can really tell that they care about diversity. I feel valued for my international upbringing, instead of being siloed for being different–which happened far too often during previous work experiences.”
As a retired professional athlete, Eunie’s free time is often filled with physical activity. From Olympic weightlifting at the gym to rollerblading through Central Park and walking along the Museum Mile, absorbing creative inspiration from artists, she loves to use exercise to get some endorphins and get out of the house. Although she’s very comfortable visiting friends or relaxing inside with her cat, Bunny Waffles, what keeps her motivated is a drive to make every second count and to live a life with no regrets.
“I try to remind myself that I’m in my prime years. Every year is my prime year. I want to feel the best and look the best during my prime years. This motivates me to chase after things that make me happy. Like my job that I’m extremely proud of that keeps me motivated, and hobbies that get me excited. When else would I be at one of the best agencies working on big scale briefs? When else would I have the energy to challenge myself at Olympic-style weightlifting? When else would I be living close with my friends who I can do fun things with? I try my best to maximise the things I can do now, because I don’t ever want to look back and regret not doing something, or not trying as hard when I had the opportunity.”
view more - Uprising