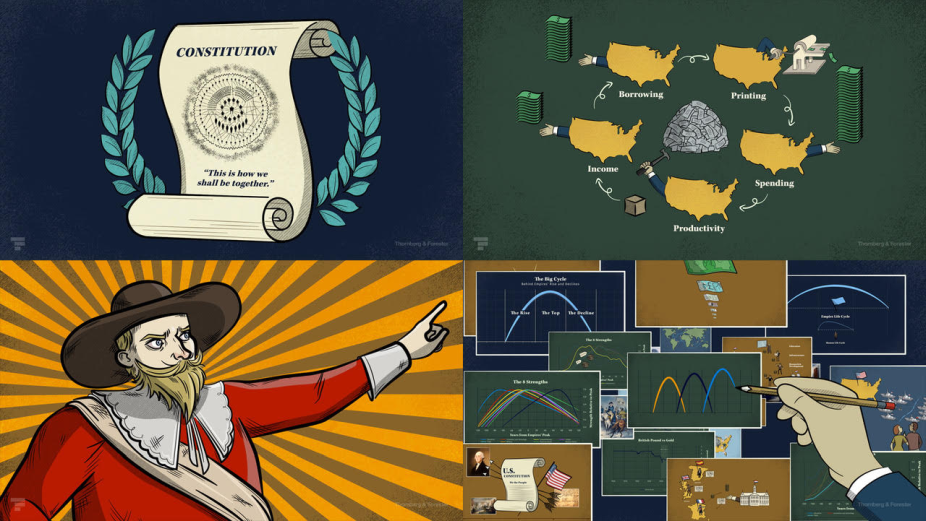 The film is a visually enthralling history lesson on the rise and decline of nations spanning 500 years, with Dalio’s futurist take on where the United States is headed on the world stage as war wages in Europe, inflation is at a 40-year high, and the gap between the 'haves' and 'have-nots' in the US is widening.

The recent explosion of podcasts and documentary storytelling has already shown that audiences are seeking educational value in the content they consume, and this film represents a new twist on nonfiction storytelling in the digital age – one that blurs the lines between brand and promo content, original content, and “influencer” content.

Thornberg & Forester took complex and abstract concepts and made them easily digestible for general audiences through design and animation.

“We sought to find an authentic visual language that supported the seriousness of the subject matter but didn’t oppress the viewer and obscure from the lessons and the message,” says Scott Matz, Thornberg & Forester president and chief creative officer. “We also found moments to inject subtextual hints of levity to help keep viewers immersed and entertained while being educated.”

Over the last few years and three films aggregating tens of millions of YouTube views, Thornberg & Forester has worked in close partnership with Dalio to create something bigger than promotional content for his books.

“We are transforming Mr. Dalio's franchise into a visual, ownable multimedia world dedicated to providing people with a deeper understanding of the critical world affairs affecting their lives,” concludes Matz.