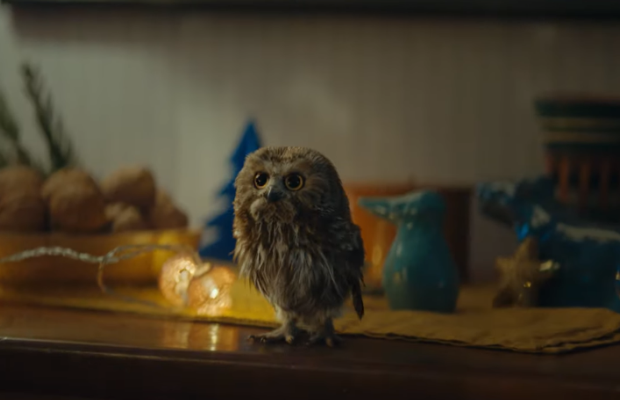 Swiss supermarket Migros has followed up last year’s festive ad about an elf that lives inside a checkout scanner with a new Christmas campaign that’s all about a lost baby owl. And yes, it’s as cute as it sounds.
A family brings home its newly-purchased Christmas tree and just as they finish up the decorating, they find a surprising stowaway – a little owl. Unable to fly and frightened, the owl inspires the family’s young daughter to take it under her wing (pardon the pun). The campaign was devised by Swiss agency WIRZ and directed by Martin Werner, who brings his flair for character and cinematography to the tale an owlet that finds itself separated from its family and trapped inside in a Christmas tree.
The creative from WIRZ was devised to share a message of charity and fellowship. Just as the owl chick is helped by a little girl, the ad encourages viewers in Switzerland to think of those facing hardship and loneliness this Christmas.
Livio Dainese, creative director and co-CEO of Wirz, told local website persoenlich.com that the starting point was to think about how to make the motto ‘Being there for each other" emotionally tangible. “Mimi embodies the sad fact that many people spend Christmas away from their loved one or friend, or even on their own. But also that assistance can change everything. Migros calls for a commitment to help people in need in Switzerland and to stand up for each other,” he says.
The spot was produced by Pumpkin Films, with production service from Artbox, who helped facilitate the snowy shoot in Lithuania – though the snow was entirely artificial and biodegradable. Little Mimi the owl was brought to life by BaconX.
In order to create Mimi, the team immersed themselves in research, says Livio in the same interview. “We dedicated ourselves to the world of owls. Did you know, for example, that they can fly silently thanks to their special springs? This was followed by the development of the character of Mimi. Questions like: How natural should Mimi be? How much character may she have? How should she flutter in the beginning? How does she fly at the end? The conclusion was the complex process of animation, textures and light. The art is to weave real film and animation into a homogeneous whole.”
Launching on November 8th, the spot and supplementary bumper ads point viewers to charity boxes of chocolates that can be bought in store to raise money for charities Caritas, HEKS, Pro Juventute, Pro Senectute and Winterhilfe.
For the last two years, Migros has melted the hearts of Swiss shoppers with their Passion Pictures-produced campaign about Finn, the tiny supermarket elf whose job it is to make the ‘boop’ noise in a supermarket checkout.