Sea Animals Struggle in a Plastic Ocean in This Distressing PSA 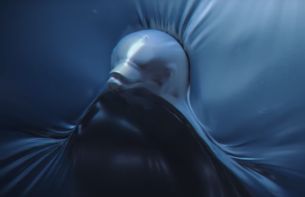 Creative content company Alkemy X recently teamed up with FF New York to produce a powerful PSA for the marine conservation organisation Sea Shepherd. Entitled 'Stop The Plastic Ocean,' the fully CG-animated piece is a heart-wrenching depiction of how plastic debris traumatically affects our marine wildlife, revealing that every year more than 1 million animals die from these man-made pollutants. The PSA launched on April 10th on social networks. In addition, Alkemy X, led by Creative Director Geoff Bailey, worked closely with FF Paris to develop the accompanying print and social media assets for the campaign.

The PSA is built around a series of hypnotic, abstract animations, each of which reveal various marine wildlife trying to break free of a liquid plastic-like substance trapping them. The form of these animals gradually becomes more defined as the spot progresses, before morphing into a lasting image of plastic debris floating in the ocean.

According to Bailey, FF tasked Alkemy X to help develop a visual narrative that steered away from the voiceover-heavy format so typical of PSAs; and, instead, aimed to grab the viewer's attention through the heart.

“I firmly believe that emotion is what moves people to action,” says Bailey. “Ultimately, this notion led us to the final concept of the piece, wherein the viewer is lulled into a false sense of security through the motion and imagery before being jolted back into reality.”

While the subject matter of the PSA is serious, a point of emphasis in serving the concept was to create beautiful and elegant moving images. Working closely with the FF New York team, the animation and design aesthetic Bailey and his team arrived at is a symbolic expression of plastic debris encroaching on ocean habitats.

“We conducted extensive R&D to create the mercurial look and feel of the material that comprises the stylised ocean world we imagined -- a hybrid of water and plastic,” says Bailey. “Working in Houdini, Maya, Nuke, and After Effects, it was a total exploration getting the motion behaviours of the material and how the sea animals interact with it, while also demonstrating their struggle in a compelling and impactful way.”

Rather than take the viewer out of the moment with a voiceover, Bailey and Hess leaned on music and sound to intensify the emotion of the story and, ultimately, express the gravity of the PSA’s message. To achieve this, they commissioned Tuesday Collective to produce an original track specifically for the animation.

“The beautifully haunting quality of the score by Tuesday Collective perfectly underscores the balletic feel of the visuals,” concludes Bailey. “The repetitive and layered style of the track slowly deconstructs to a single note, taking the viewer to the verge of death before a subtle key change expresses a sense of hope -- that is, if the viewers take action.”