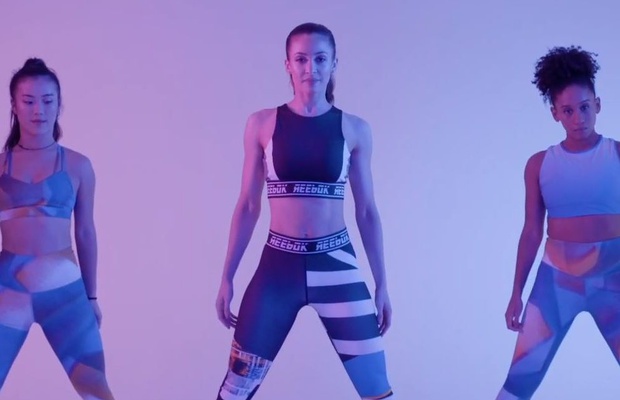 DW Fitness First, one of the largest privately owned health and fitness providers in the world, and Reebok announce their exciting new partnership with MTV by launching a nationwide activation. Developed with the help of media brokering agency, Electric Glue, the Influencer-led activation aims to showcase the SS19 Reebok collections and engage key female audiences with a series of fun workouts.
DW Fitness First, Reebok, and MTV enlisted Influencer, Danielle Peazer, to be the face of the activation. Peazer is one of the UK’s most successful commercial dancers and has been a brand ambassador of Reebok since 2016. For this campaign, MTV produced five x 10-minute workouts, which are designed to be fun and accessible to encourage women to encorporate more fitness into their lives.
The first two workout videos of the content series will launch at the hero event on Thursday 24th January at DW Fitness First’s flagship gym in Cottons Centre, London. It will be attended by Peazer, amongst other Influencers, and will see her helming three workout sessions for gym-goers and the public, which will take place in the early morning, lunchtime, and late afternoon. The event will also feature a showcase and gifting of the SS19 Reebok collection and a meet and greet with Peazer.
Electric Glue worked in close collaboration with DW Fitness First to develop a high-impact campaign across the brand’s storytelling channels. The media brokering agency integrated the idea with the overall media strategy from the early stages of the campaign to effectively amplify the DW Fitness First, Reebok, and MTV’s aims.
Jess Moore, Head of Client Partnerships, comments: “This partnership is an exciting opportunity to amplify the message that DW Fitness First actively supports women who want to be more engaged and involved with sport - whatever their level is. During the first phase of this campaign, we will focus on opening communication with an engaged 18-35 female audience. In the second phase, we will retarget this audience and focus on conversion. MTV’s channels are the perfect place to start this conversation and showcase the Reebok/DW Fitness First/Danielle Peazer collaboration.”
The event will take place nationwide, with similar events launching across other DW Fitness First locations, featuring local Influencers. Following the initial launch, the content will be shared on DW Fitness First’s social channels, its app, and in their gyms nationwide. The remaining workout videos will be rolled out between January and May.