Dark Energy, DigitasLBi and Cookie Studio create a series of mixed-media spots that immerse us in iconic Pringles flavours 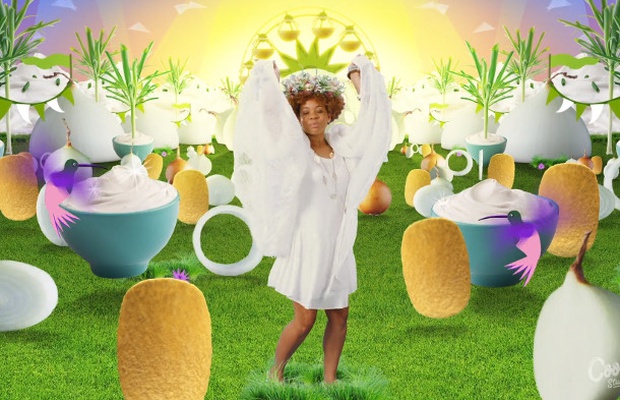 Pringles has launched a series of animated films that transport us to new worlds with their classic potato chip flavours. Dark Energy, DigitasLBi and Cookie Studio created the quirky spots with the snack brand. In each mixed-media film, characters take a single bite of a Pringles flavoured chip and are momentarily propelled into a tantalising fantasy universe of taste immersion.
In each of the six 20-second commercials - ‘Hot & Spicy’, ‘Paprika’, ‘Spring Onion’ ‘Sour Cream & Onion’, ‘Nacho Cheese’ and ‘Texas BBQ’ – the all-consuming taste experience of the snack evokes an epiphany moment for the taster, depicted by their entering of a vivid and colourful mixed-media land. In ‘Hot & Spicy’ the character takes a bite of the flavoured chip and, in a moment of taste ecstasy, is transported from a friend’s kitchen to an animated platform where they comically pole dance around a chilli tree to an audience of chillies and Pringles, whilst dressed in a firefighter’s uniform. Mixing humour and escapism, viewers return to the kitchen, where, Pringles in hand and eyes closed, the character is still jigging away to the imaginary scene to the bewilderment of their friends.
The fantastical universes are crafted with a combination of two-dimensional and three-dimensional illustrations, live action, stop motion and cell animation, each layered to create the surreal and bold scenes.
London-based animation studio Cookie Studio was invited to partner with Dark Energy Films to re-imagine, design and animate each of the films for the flavours. The two companies joined forces after Chris Strong, live-action director at DigitasLBi and Thiago Maia, creative director at Cookie Studio had both worked with DigitasLBi’s executive creative director, Peter Drake. Peter had highly rated both creatives and they joined their creative forces for this project. Cookie Studio created storyboards, animatics and style frames for the spots which were integrated with live-action scenes of each character, shot by Chris Strong, director at Dark Energy Films.
The spots relied on Cookie Studio’s signature bold and colourful style and, as experts in mixed-media, the studio was keen to create the animated lands of escapism. Thierry Levy, Head of Production at Cookie Studio says: “The brief encouraged us to explore bold and quirky avenues for the animations, and, as massive fans of this style, we couldn’t be happier. We worked closely with our friend, live-action director Chris Strong from Dark Energy Films to come up with these surreal worlds, where tasty food interacts with live-action footage of the characters and different styles of illustrations.”
To ensure that the imagery in the tasty animated worlds was true to the bursts of flavour in the moment of biting into each snack, Cookie Studio worked closely with Matt Watson, Creative Director at DigitasLBi and his team. Thierry says: “Our joint teams shot every item in a blue screen studio, creating vivacious, delicious looking footage and imagery for each element. This took four days in two simultaneous blue screen studios, shooting all the elements using a mix of photography, video and stop motion.”
The live-action elements, captured by Dark Energy Films, were shot in Cape Town, South Africa, with Cookie Studio’s Creative Director, Thiago Maia actively involved in the VFX supervision on-set. Thiago says: “Each live-action scene that takes place in the animated world is shot on green screen. This allowed the cast to be transported into the imaginary universe of flavours in post-production. This took two days with all of the actors in one studio, before another two days of shooting in four amazing locations to capture the ‘real world’ elements of the films.”
The range of media styles involved in the films required rigorous planning from Cookie Studio. Thierry explains: “The biggest challenge was coordinating a superlative blend of live-action over four styles of animation in each of the single films. However, we worked closely with Chris Strong and the CD at DigitasLBi, Matt Watson, from the offset to ensure everything ran to schedule. We also meticulously planned how the actors and live-action shoot would appear in, and interact with, the animations. The outcome is, in true Pringles style, a surprising and humorous marriage of two worlds.”
The spots are now live in the UK on Pringles’ social channels.

Cookie Studio Powers Up with Ben 10 Idents for Cartoon Network