The Whitehouse Post editor on a recent promotion, why he’s too impatient to be a director and the appeal of the variety that adland offers 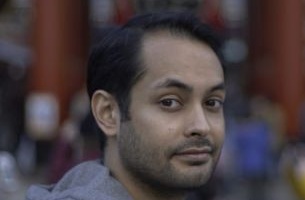 If Iain Whitewright was a director, he claims he’d be impatient and rush the shoot, in an attempt to get to the cut sooner. Lucky, then, that he decided to travel the path of editing instead of directing. After a stint working on TV, Iain became frustrated with the longevity of the projects and craved something quicker, snappier and more varied – a story that we hear so often from commercials editors. And so he joined Whitehouse Post in London as an assistant editor. Fast forward four years and he’s just been appointed as a full time editor. LBB’s Addison Capper chatted with him to find out more.

LBB> You’ve just been promoted from assistant to editor – congrats! How are you feeling about your new role?
IW> It feels great! Any assistant knows how long it takes and what the hours are like, so it’s nice to achieve what you’ve worked hard for.
LBB> How did you end up as an editor? Where did you hone your craft? Was it what you always wanted to do?
IW> I knew I wanted to do something creative but only got a taste of editing at university – when I did it became clear pretty quickly that editing was what I wanted to do. I started out in TV, making tea and learning Avid, and had a good time doing it and with some great people. As for craft, it was really down to working at Whitehouse – you learn from so many people who have such varied styles.
LBB> Tell us a bit about your role as an assistant editor - how long were you doing it for? What tips would you give someone just setting out as an assistant?
IW> I was assisting for about four years and what’s helpful is how the role changes as you progress. It may start out pretty full on and daunting, but eventually it all becomes second nature and then you end up taking over jobs, doing cutdowns, getting your own jobs and clients, etc. All I could say to someone starting out is, cut anything you possibly can (no matter what it is), be happy to be chucked in the deep end on some massive job, as you’ll pick things up 10 times as quickly and do everything with a smile – and you can’t go wrong.
LBB> What drew you to commercial editing, as opposed to film or television?
IW> After working in TV and having shows that lasted half a year, the idea of ads was quite appealing – jobs that lasted a couple of weeks and that would be completely different to the previous one. It’s pretty cool to have the ability to jump between style and genre on different jobs. I think in a way it helps you to be a more creative thinker.
LBB> As an editor, do you have a specific method of working or does it differ dependent on the job? And if there is a way of working that you stick to, what does it involve?
IW> It completely depends on the job, which is cool. It’s nice to be able to figure out each job and see how best to tackle it.
LBB> A big chunk of your role is the communication of a story efficiently and clearly – what are the most challenging aspects about getting to grips with the nuts and bolts of storytelling?
IW> I think it begins with finding the best possible story inside the job, if that makes sense. There are many ways of cutting one particular story, so for me it’s just trying everything and then refining and then maybe trying some more things again… soon you know more about the story than anyone.
LBB> What do you enjoy about piecing those cogs together?
IW> I like the feeling of the process. Selecting, then assembling, then cutting – just seeing how the hours of material slowly become an actual film. I think I’d be quite frustrated as a director; I’d probably end up rushing the shoot just to get into the edit quicker…
LBB> Which projects that you’ve been involved in are you most proud of and why?
IW> There was a visual poem I cut for Dan Sadgrove, a moody voiceover set to some beautiful visuals of nature – no storyboards, we were just creating something cool, and there was a lot of freedom there which you don’t always get.
IW> Equally there was an old Adidas job I cut over a weekend with two directors; a madly creative session and I don’t think any of us thought we’d make what we ended up with.
Essentially I’m most happy with the jobs that are the most creative in edit terms, where it really feels like a team effort, because you all just want something great at the end.
LBB> Where did you grow up and what kind of kid were you?
IW> A straight up London kid (North London to be a bit more precise).
LBB> If you weren't in advertising, what would you be doing?
IW> Definitely something to do with food… maybe a chef?!
LBB> Outside of work, what do you like to get up to?
IW> When not thinking about work I’m almost definitely thinking about the next place to travel to (or what to eat next…).