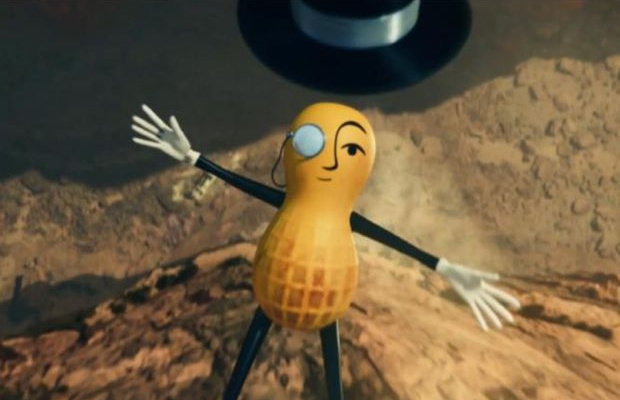 Did you hear? Mr. Peanut is dead! The 104-year-old mascot of US nut brand Planters is to become an ex-peanut and the US media is having conniptions. Yesterday the brand posted a tweet from ‘the estate of Mr. Peanut’ confirming his death, with a video showing the icon careering off a cliff edge. I know. I know. Shocking.
The US entertainment media has helpfully piled in, from Entertainment Weekly, CNN and Deadline to random movie news YouTubers. All helpfully building hype in the run up to the Planters Super Bowl commercial.
Which just goes to show that ‘killing off’ your brand mascot might be an oldie, but it’s a goodie. It’s in about the third chapter of ‘things that you can put in adverts’.
Last year, the Bud Knight dillied his last dilly at the hands of The Mountain in the Bud Light/Game of Thrones Super Bowl ad. Shortly after, VMLY&R offed Simon the Sloth, who had served Kiwi insurance platform LifeDirect for ten years, in a freak hiking accident. The reasoning was that the lethargic sloth no longer felt fresh and had lent the brand a feeling of sluggishness. And for a brand that advertises life insurance, a freak, fatal accident is at least product-relevant.
Another popular ploy is asking the public to engage and vote to save the mascot. In 2011, Aussie bug spray brand Mortein asked the public to vote on whether or not to let their 50 year old hero Louie die. Of course, as it’s the sort of stunt that relies on people caring enough to vote in the first place, so the results are a foregone conclusion (and yes, Louie lived to buzz another day).
If you’re looking to change things up for a brand while generating a bit of PR in the process, an advertising assassination might hold a two-birds-one-stone appeal. But the very thing that makes brand mascots or regular characters (what System 1’s Orlando Wood calls ‘fluid devices’) compelling hooks puts their ‘murder’ at risk of backfiring.
Humans are empathetic creatures, and the mechanisms that allow us to empathise with people in the real world also kick in when it comes to empathising with fictional characters. There’s a vast body of research that shows that when our brains respond to symbolic representations, hypothetical scenarios and made up characters, the patterns of activation are similar to when we confront real objects, scenes or people.  So when a character who we love or are familiar with ‘dies’, it’s unsurprising that we exhibit and experience grief. When Sherlock Holmes was bumped off in 1891 novel The Final Problem, fans took to wearing black mourning clothes.
I’m not suggesting that people actually turn into wailing widows over brand mascots. Behave. But our grief circuits might experience a faint ripple.
Even killing an annoying character might have repercussions. Back in 2012, UK insurance comparison service GoCompare launched a campaign whereby its chubby opera singer Gio Compario was tortured by a series of light entertainment celebs, culminating in his eventual slaughter. They received 43 complaints. My parents, who are decidedly not advertising industry people, actually kinda liked Gio and thought it was just a bit nasty and sadistic.
Of course eventually, Gio did what all murdered mascots do eventually. He came back. Like Jesus. First in 2015 and then last year in a switched-up creative from Droga5. Brand characters are fairly similar to soap characters and superheroes in that regard, though struggling soaps and comic book publishers have been playing the death and resurrection game for a lot longer. As well as pushing marquee hero deaths as a tired headline grab, publishers like DC and Marvel have also used the deaths as a chance to revamp their characters and tart up their costumes.
And maybe the rhythmic predictability of death and resurrection has a reassuring quality. Maybe that’s why the media and social media play along with the pantomime call and response of faux horror. During one extended boomerang-y stay with my folks, I managed to crack the pattern of murder, body disposal, shock reappearance in soaps.
In any case, I have a teeny tiny suspicion that Mr Peanut won’t be gone for long. Plunging over a cliff edge – it’s all very ‘Reichenbach Falls’. It might have taken 10 years for Sherlock Holmes to come back after his ‘death’, but I’m going to guess we’ll have a 10-day gap between the late legume’s death and ‘surprising’ return.
One thing that definitely isn’t going to die and stay dead is this whole business of ‘killing’ mascots.