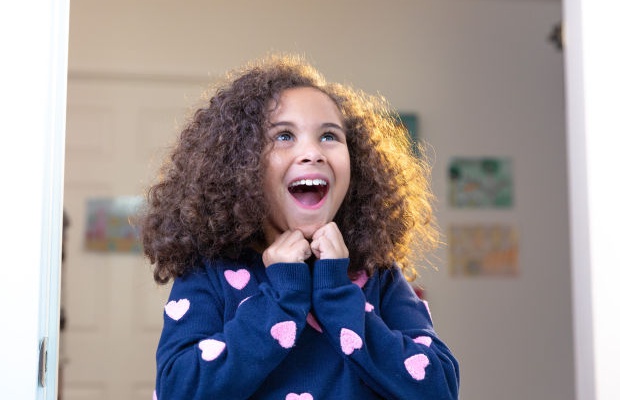 KILZ takes paint ads to an emotional level with the new campaign for its line of primers, which lay the foundation for great paint jobs. Led by a series of commercials that depict the delight of people seeing their dream rooms for the first time, the campaign involves several layers of content to take audiences from inspiration to education and preparation.

Spots focus in on the satisfaction that makes all the work of painting worthwhile by showing people reacting to common occasions where people paint, without showing what they’re seeing. The idea was to recreate the suspense of home improvement shows, which tease into commercial breaks with guests’ extreme reactions to something being revealed off-camera.

In the 30-second spot called “Reveal,” we watch five scenarios of people being beckoned or led to see something. First, there’s the anticipation, from a little girl running up the stairs and a husband covering his pregnant wife’s eyes as he walks her forward to a couple beckoning a grandfather to come see something. Then we get intense reactions from gasps to smiles and tears. The spot closes with “every project is worth it,” the KILZ logo and a button pointing viewers to “see what they see.”

“We’re dramatising how the product makes people feel, and giving people a way to recreate the reveal reaction for themselves,” said Lee Walters, co-founder and ECD at KILZ agency of record Arcana Academy. “It’s a new conversation for KILZ, but also for primer and for the broader paint category. We’re breaking away from the traditional product application and use case approach to highlight the satisfaction and pride that results from completing a transformation.”

The video ad leads to an interactive landing page entitled “Every project is worth it,” which reveals the five rooms the actors were reacting to. Each provides both before-and-after comparisons and step-by-step instructions. The instructions start with priming the surfaces - a foundation step largely lost on a new generation of homeowners. By clicking on the products listed, visitors can go straight to where to buy them.

A series of hero animations will also appear on YouTube, Facebook and Instagram, where people increasingly look for before-and-after imagery and instruction. Tied to popular searches for projects (e.g., bathroom, nursery), the animations fill in the line “Every ____ is worth it” with images that revolve as they’re primed and painted, and close with the reminder to “prime every time” and a link to “learn why.” The animations lead to specific how-to project pages within the campaign landing page experience.

“We need to reinforce that primer makes paint more beautiful on all kinds of projects,” said Jessica Darke, senior producer at Arcana Academy. “Primer has a big impact on the quality of painting, yet most people aren’t conditioned to think of it anymore. So, we’re showing the YouTube generation how to create the delighted reactions for themselves.”

The ads will run online through September, covering peak painting season, across a wide variety of online media and print platforms including ESPN, YouTube, PureWow, HGTV and This Old House. In addition to the commercials and animations, there will be dozens of animated banner ads, social media ads and posts.

“Our new generation of do-it-yourselfers require a fresh inspiration and approach,” said Jodi Allen, chief marketing officer at BEHR Paint Company l KILZ. “We’re using the lens of pride, showing everyone beaming, both people who do the work and those it’s done for. By leading with the satisfaction, we can introduce more people to our extensive foundation of material on painting projects done right. We can mean more to more people this way.”