KFC Australia's 'Snack! In the Face' 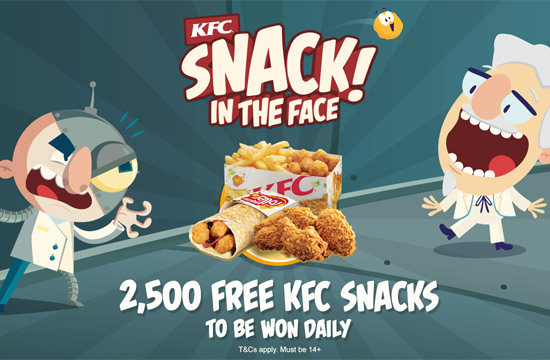 In a first for mega brand KFC, DT – part of Ogilvy Australia and STW – has created the first branded mobile app for the fast-food giant directly targeting the young adult market.

KFC's Snack! In the Face campaign combines the three loves of its core target audience (primarily male within 16-24yo age group) – mobile, gaming and love of KFC chicken – in a tongue in cheek branded mobile game.

“The creative concept was developed to capture the attention of a young and spirited audience in a way that would ultimately increase awareness of KFC’s snacking menu and drive an uplift of sales across KFC stores Australia-wide,” said Jason Deacon, DT’s Creative Director. “What better way to capture young male’s attention than via a mobile game which combines lasers, evil characters and, of course, the ultimate saviour – in this case The Colonel – and at the same time satisfy their love of KFC”.

KFC’s Snack in the Face campaign is a first on three levels for KFC Australia: first ever branded app, first mobile or digital game, and first use of mobile coupon in-store.

Adam Beaupeurt, DT Lead Strategist, said it is not all about providing fun for gamers. With a clear target to increase snack sales, the game had to be intelligent on multiple levels – capture attention; provide incentive and fun for people to play and share, while ultimately drive people in-store (to any of KFC’s 600 stores Australia-wide), to redeem prizes and purchase.

“We worked hand-in-hand with the Ogilvy KFC team to ensure that the concept would support and strengthen the KFC brand proposition, whilst working with MediaCom to identify the best channels to promote and distribute the game.” Beaupeurt continued.

The game itself is tongue in cheek in nature and requires users to help popcorn chicken characters escape the clutches of the evil Professor Snackbot by propelling them through Lairs, avoiding obstacles like buzz saws and lasers, and into the safety of their one true saviour, the Colonel. Eighteen levels across 3 "lair" environments offer users an adventurous experience with their favourite brand at the helm.

“The aim is to reward all users with their favourite food prizes, and generate awareness of the snacking menu range as a by-product,“ said Deacon. “The food rewards are used to generate organic downloads and plays via a gifting mechanic using Facebook Connect, allowing users to brag about their prowess while sharing unredeemed prizes with their friends, thus playing to the egos of young males.

“To help incentivise downloads and plays, there are multiple rewards on offer. As a user progresses through the various levels, there are 25 different achievement rewards to be won. Rewards are aligned with the level of difficulty, so BOGOF and $1 off type rewards for easier achievements up to a free product for the most difficult. It’s very engaging and interactive,” he continued.

KFC’s Marketing Manager, Adam Draper, said: “The app is part of the brand's long-term digital strategy. Digital is changing the way we market our business and satisfy consumer demand and is an important channel for interacting with customers one-on-one. Historically KFC has used above the line tactics however with over 70% of Australians using apps on a daily basis, KFC Snack! In the Face presents a great opportunity for the brand to directly engage with its customers via a digital medium."

“For KFC, the app is an opportunity to harness its target audience’s attention in a fun way, and also communicate key snack menu choices through mobile. The app gives consumers the additional ability to engage with KFC at both a mobile and in-store level.”

The app is available to download free for iPhone and iPod touch on the App Store, and for Android devices on Google Play.

In total 140,000 free KFC snacks will be given away, 2,500 free prizes every day of the campaign plus multiple achievement prize opportunities also available. All rewards will be mobile-based and redeemable in all 600 KFC stores in Australia.

Snack! In the Face on Google Play:
http://play.google.com/store/apps/details?id=air.au.com.kfc.snackintheface