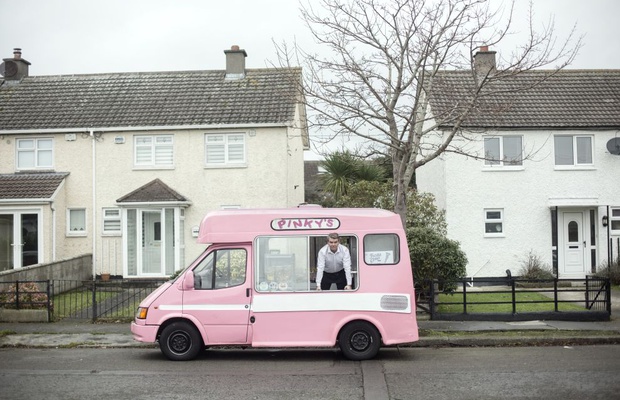 Motherland director and founder Ross Killeen’s adequately named ice cream documentary '99 Problems' is set to premiere at the Dublin International Film Festival this month. 99 Problems delves into the humorous, charming but often murky world of the Dublin ice cream trade. The protagonist Pinky drives a pastel pink ice cream truck and has done his entire adult life. On the surface the ice cream business seems sweet and colourful but the film reveals that, in fact, there lies a dark undertone of fierce turf wars.

Through the eyes of Pinky, the self declared 'king of the ice cream men', we're taken into this unregulated industry where rival drivers will stop at nothing to protect their livelihoods.

It all started with a driving lesson, tells Killeen: "My wife's driving instructor was a man called Ken AKA Mister Jingles, an ex ice cream man. He told her all about his past life - turf wars, being attacked by baseball bat wielding ice cream men and van windows being smashed up. All in between seven point turns and reversing around corners. She came home saying 'you have to make a documentary about this!'"

Four year’s later and with the help of his stellar crew, Ross Killeen's short is set to bring Pinky the ice cream man to excited audiences at this year’s festival.

Killeen spoke of his admiration for Pinky: “Mark’s a real entrepreneur. His father was one of the pioneers of video shops in Ireland. He had dry cleaners, snooker halls, all sorts of businesses and in the ice cream van trade you’ve got to be enterprising. You have to have your branding and your song. You have stand out and be aggressive and competitive.

“It’s just been a great experience. It’s great to see the transformation of Pinky from being really reluctant to fully embracing it and being ready for the red carpet with the van parked outside. He used to have the Pink Panther as his tune but it drove him mad. His tune is Mozart now."

99 Problems will premiere to a sold out audience at the Dublin International Film Festival this month.

“From Awkward Dates to Intimidating Older Kids” - Motherland Director, P.O.B, on the Relatable Aspects of Fear in Allianz Ad

From Ireland With Love: Production Company Motherland Are Globetrotting Their Way to Success