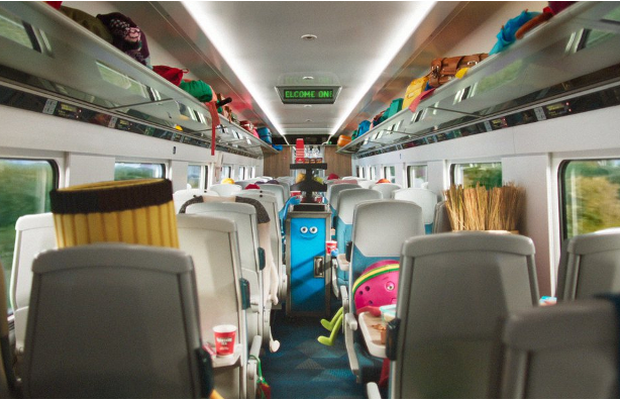 Freefolk have worked their post production magic on the latest commercial for TransPennine Express, directed by Joseph Mann at Blinkink for Engine.
In the charming spot celebrating the arrival of the TransPennine Express state of the art trains, 24 human size puppet passengers are making travelling more enjoyable than ever with Freefolk’s VFX breathing life into the cheery travellers.
Director, Joseph Mann, who has a long relationship working with Freefolk knew he and his puppets were in safe hands: “the post requirements remained extensive and complex. Luckily I was in safe hands with Freefolk. The team and post requirements were exceptionally coordinated by their VFX producer, Charles Gillett. The post team was headed up by Flame artists, Andy Copping and Venancio David who, with their brilliant team enabled me to add all the high level of detail required to bring each character to life in the most nuanced ways possible. My post list was over 6ft long, sorry guys I will make sure the next ones a bit shorter!”
Joseph went on to say: “the reality of 24 human size puppets actually getting on a train was always going to be a logistical challenge let’s be honest. On the shoot every time the train tannoy announced ‘if you see anything suspicious please report it to a member of staff immediately’ I chuckled. We had a blast and somehow pulled it off.”
With The Chordettes’ classic ‘Mr Sandman’ as an upbeat soundtrack and character voice overs from Jane Horrocks, Ross Noble and Ricky Tomlinson, VFX were required to give additional personality to the puppets, Andy Copping commented on what was involved:
"Working with Joseph was, once again, a great pleasure his eye for detail really shows across this campaign. The whole 2D team used many tricks and techniques to bring all the characters to life, from small details like blinks winks, smiles, jaw drops, sweat, and even paint dripping. Seamlessly removing the puppeteers was more difficult than a normal studio shoot as the addition of realistic light changes for the passing scenery in the windows."
Freefolk’s head of colour, Paul Harrison was colourist on this project and commented: "Another lovely series of spots from Joe. These were a bit of a jigsaw from a colouring point of view, lots of elements to put together to create the final images, but the result is very pleasing. Joe and I spent a lot of time finessing each part of the puppets, using multiple layers to get them to look just right. The final grade stage came after the bulk of the VFX work was done and the puppeteers were removed, this seemed to really breathe life into characters allowing their personalities to come through.”

Freefolk Strengthens Their Offering with a Hattrick