How Photo Real Animation Saw the Rebirth of a Peugeot Classic 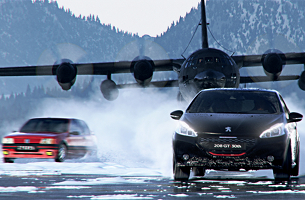 Gérard Pires’ legendary, James Bond-style ‘Bombardier’ spot for the Peugeot 205 GTI is legendary. Well the legend hath returned. BETC and Havas Düsseldorf recently teamed up with WIZZdesign directing collective Andy’s to bring to life a 21st century successor to Pires’ 1980s classic. Created for the Peugeot 208 GTI, the spot opens with footage of the original before the 208 pulls into shot and Andy’s work takes centre stage. And the catch? Not one car, plane, helicopter or even landscape was shot during the making of the campaign. In fact, around 90 per cent of the film was captured in 3D, photo real animation by Andy’s. Just vehicle interiors and the actors were filmed on green-screen and then added in post production to the 3D scenes. LBB’s Addison Capper spoke with Andy’s and producer Matthieu Poirier to talk technicalities around producing photo real animation, and why it was essential to produce Bombardier’s successor in this way.

NB: Check out a new making of film about halfway down the page. (You can turn English subtitles on.)

LBB> Why did the brief initially appeal to you?

A&MP> We got to make the successor to a legend!

LBB> The spot is a rebirth of Peugeot’s famous Bombardier film. What techniques did you use to keep that old school ‘Bond’ feeling but still make it fresh?

A&MP> The main idea of the campaign was to create a spot as a homage to the film directed by Gérard Pires for 205 GTi Peugeot in the '80s. We had to imagine a new version that kept the mood and the feeling of the previous film, which was very epic to the audience at that time. We focused on the direction (storytelling, acting, styling) to make the new film current and fresh. We kept the same overall outline of the old 205 spot, but we updated the approach for a 2014 campaign.

We always made ​​sure to stage things in a way that could be possible in live action. It was really important for us to use camera movements that were achievable in reality to make sure the images were credible. Every time we were placing the camera in 3D, even if we were completely free, we always put it where it would be if we were shooting it (on a dolly track, from a helicopter, on a crane).

LBB> Not one vehicle or landscape was captured for the film - it’s all 3D animation I believe? Why was that the most suitable route to take?

A&MP> It's true that we built everything in CGI. The elements that we injected into the script were very complex to shoot, almost impossible actually. If we did shoot it, CGI would have been necessary to combine the footage. For starters, we made this spot during summer, which is not the best time to find snow. And we would've had to synchronise the stunts with an aircraft, the Peugeot 208GTi and a helicopter, as well as destroy a frozen lake, and the helicopter. Needless to say this film would have been very different if we had to do it exactly like the '80s campaign.

LBB> How do you go about producing photo-real images in that way?

A&MP> It’s not an easy job, but with the right people on board, who are passionate, and with a lot of energy, we were able to make this film realistic in terms of photorealism of the image. Andy’s worked on the images with their own studio (Unit Image). They are very specialised in these projects so they've had time to develop tools and a workflow dedicated to this kind of job. The software does not make photo-real films by themselves, so at the end of the day you need someone - an artist - to make sure that it looks real.

This special kind of project requires a team that has a technical background but also a very advanced artistic profile. Designers that combine these two qualities are very rare and even the first tests were impressive. Each person on the team was crucial and very involved in the project.

LBB> How did you combine the new film with the old one? Is there a frame where it changes to 3D?

A&MP> The beginning of the spot is the original one from the 1980s. Our film starts on the wide shot of the plane when the 208 GTi enters the frame.

This shot has been redone entirely in CGI, based on the original footage from Gérard Pires. We just modified the quality of it in the beginning of the shot to make it look like the old 4/3 vintage format before the transition to the 2.35 framing, which is much more cinematographic, and has much more detail and better picture quality

LBB> What was the pre-production and research process like?

A&MP> Pre-production was a really nice period. We got to imagine with the agency the film as we wanted it to be. That was a very fluid process with BETC and Peugeot.

What's very specific to animation vs. live action is that we have to design and research every shot before producing the film. Every single frame of this film was drawn or modelled beforehand. The live shoot is also determined by the layout we did in 3D. This is not a very sexy process for directors who are used to a live action approach. But it's absolutely necessary for this kind of project - with a lot of CGI involved - and Andy's are very good at it.

LBB> How long did the production take from start to finish?

A&MP> We were contacted mid-June to produce the spot for the end of September. Tight schedule - we had a hot summer in Paris this year!

LBB> What were the trickiest components of the production how did you overcome them?

A&MP> We had to think a lot about the frozen lake collapsing. We had to re-imagine it several times. It's always difficult to work with ice, but the added interaction with the water made it especially tricky. We had to watch a lot of videos and films to find the right solution.

Having a snowy environment was also very difficult. To render a realistic look in an all-white environment is hard because we cannot ‘load’ the image with different materials to make it look richer. So it's a long process of composition and texture rendering to overcome this limitation.

VS Chemicals
View all Work