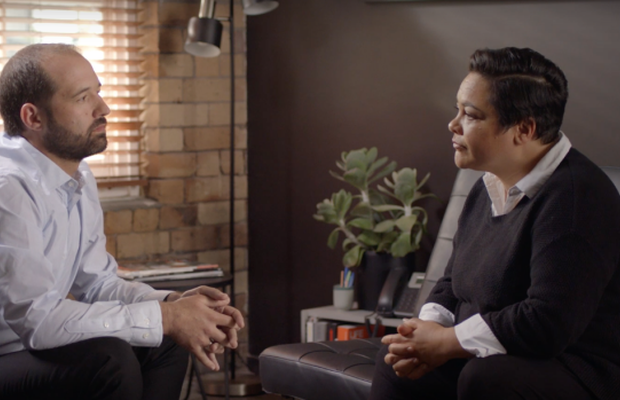 International Women’s Day has become one of those annual adland moments when every brand and agency feels the need to do something. The obvious route tends to be something along the lines of a sentimental swoosh of vague empowerment, some sort of highly charged symbol. Maybe a rousing manifesto?
At Saatchi & Saatchi NZ they decided to go for a somewhat more direct and practical approach with their IWD campaign ‘It’s Not That Hard’. At a time when broaching topics like toxic masculinity serves as a dogwhistle for online trolls, the reasonable-yet-firm tone makes the campaign difficult to argue against.
And, in a fortnight that has seen New Zealand face one of the most horrific atrocities, that sense of reason and pragmatism is no lost of Saatchi & Saatchi’s New Zealand CCO Toby Talbot. “ There are a lot of businesses around the world that know it’s a problem and talk a lot about it but don’t actually do anything,” he says. “It comes back to New Zealand horrible circumstances that happened on Friday and I imagine within a week there will be a ban on assault rifles. That’s what I love about new Zealand is that there is a sense of can-do and wanting to right the wrongs. And that’s why I still think it’s a magical country. I think we get on and do things rather than just talk about them."
‘It’s Not That Hard’ is a series of short and snappy executions that run across spots, radio, posters and even mugs. They set up apparently lengthy and elaborate questions, ramping up the apparently complexity of navigating the political correctness of the 21st century workplace… only to undercut them with disarmingly simple answers.
The campaign was initiated by a group called Champions for Change, a group of 53 CEOs and chairs in the country. Champions for Change I, in turn, convened and run by Global Women. When they initially approached the agency, they were looking for something more in the ‘rousing manifesto’ mould, but it soon became clear that it wasn’t the most effective path to take.
“It’s been a strategic journey really,” says creative director Kristal Knight. “We were briefed to do a bit of a manifesto piece, we were going to do one of those big visions of ‘this is what we stand for’. We’d gone down that route and we had some scripts and they were happy but we kept coming back to it. This isn’t going to shift anything. This is going to make people go ‘this is lovely and we love what you’re doing’ but we didn’t feel it was going to make any difference. We kept chipping away and the client was keen to see if there was a way we could give people some tools.”
The humorous, instructional tone owes much, explains Toby, to the public service announcements of the 1950s – and also to the parodic sketches by British comedian Harry Enfield and his character Mr Cholmondley-Warner. But with the sharp writing and clean art direction, the finished campaign is anything but retro.
“
The original campaign idea was even more blunt and to the point. Initially the team toyed with the tagline ‘Dick Move’ – an extra pinch of that no-nonsense Kiwi humour but in the end it was decided that a less divisive approach would work better. Plus men aren’t the only ones guilty of unconscious bias – and women aren’t the only ones who can suffer from it.
Krystal’s creative partner Jordan Sky is a man and both are working parents. The experience of working on the project brought to the surface the different roadblocks that lay ahead of Krystal and Jordan’s partner – whilst also highlighting the disparities in time spent with his children.
“When it comes to taking gender out of it, one thing we wanted to make clear was that gender equality isn’t a women’s issue, it’s actually for everyone,” says Kristal. “The gender roles and expectations hurt men too. We talk about flexible working hours to help women return to the workforce after having a family but no one actually does that for men.”
Once the idea was nailed down, the team pushed and pushed to make it tighter and tighter, believing that in this case brevity really was the soul of wit. For poor director Corey Chambers that meant cutting and cutting the live action footage to the barest minimum. Production company Eight, run by MD Katie Millington made sure to have an equal gender split behind the camera, amongst the crew.
Looking forward, the team are keen to see how this platform can be elaborated and used to explore and challenge different forms of unconscious bias. “Actually it’s pretty flexible and we can definitely go into other areas of unconscious bias,” says Kristal, simply. “It’s finding those areas where people make assumptions.”