The brief this year is an ode to the greatest word in the creative vocabulary, 'IF' 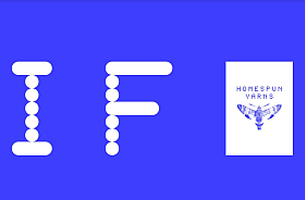 Homespun Yarns launch ‘IF’, the brief and call for entries for their fifth annual, talent nurturing, short film competition.
The brief this year is an ode to the greatest word in the creative vocabulary, 'IF'.  The infinitive, the ultimate, IF makes anything possible and entrants are invited to submit a short film idea that begins ‘IF’.
Download brief here:  https://homespunyarns.tv/brief/
The fifth competition was unveiled at the first CraftWorks of the Year where
Owner & Editor at Homespun, Tim Hardy commented “We are especially excited this year, we’ve made it to five and now have more industry support than we could have imagined back in 2014. Not only are we creating projects for our junior editors to work on but we’re opening this up to more production and post production roles through our collaborators.  It’s rewarding to be a part of young filmmakers, of all backgrounds, coming together at the beginning of their careers.”
The competition screening event has become one of the most important industry nights of the year to spot young directing talent, with previous winners now enjoying great success.
Speaking at CraftWorks, one half of last year’s winning duo, Felix Brady, had this to say, “Homespun Yarns motivated me and made be believe in myself, as a result I got in front of the right people.  I’ve now been to signed to Stink on their music video roster and this wouldn’t have happened without the competition.  The experience definitely improved my craft, through the people I got to work with, I built relationships with crew at Wave and Homespun so hopefully we’ll grow together”.
As the competition has grown more partners have come on board to offer support.  Wave are partnering for the third year and the Panavison Group are providing equipment and technical support for the finalists again, as well as sponsorship.
George Rumsey, Head of Communications UK, Panavision was keen for the whole Panavision Group to be part of Yarns: “The Homespun competition allows a diverse background of emerging filmmakers and creatives the freedom to generate original content. That diversity and originality is something that we all need to strive for as we build the future of an advertising industry we all want to be a part of. As such, the whole Panavision group felt compelled to support Homespun in any way we could and we are all proud to be a partner.”
Entrants have until 11:59pm on 27th April 2017 to submit their idea, in the form of a script, storyboard or treatment.  Three will be shortlisted and Homespun will provide £1,500 funding to make each film a reality, as well as production support form some of the industry’s finest.
The shortlist will be announced in June following in-house judging from the entire Homespun team. The awards night will take place in October when the final three films will be screened and judged by the audience.  The overall winning film will also receive a £500 cash as well as other, soon to be announced prizes from Homespun Yarns partners and supporters.
The Homespun team are always on the lookout for likeminded companies to partner with to be part of uncovering the next generation of filmmakers.
For more information on this opportunity, please get in touch: yarns@stitchediting.tv