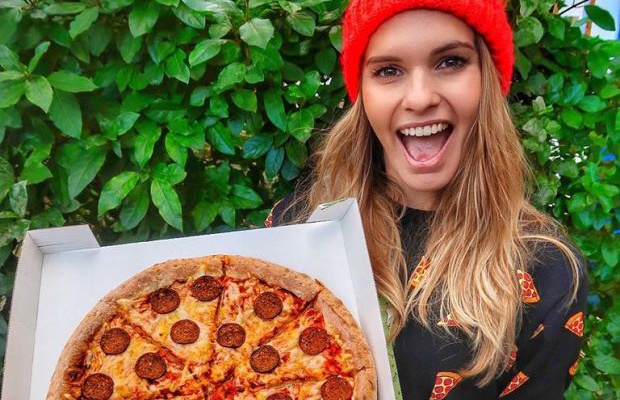 Clare Every has spent much of her working life at advertising agencies. After cutting her teeth as a PA at MediaCom in London she headed to the MullenLowe Group’s marketing department, eventually becoming the agency’s global digital communications manager. But while ascending the career ladder, in her spare time she was building something else - a food-devoted Instagram channel that today boasts over 87,000 followers. The Little London Vegan is, unsurprisingly, dedicated to the British capital’s best vegan food.
Now though, the Little London Vegan has a big new side gig. On top of her job at MullenLowe and adventures as the Little London Vegan, she is the first ever chief vegan officer at pizza delivery chain Papa John’s. Announcing the news on her Instagram page, Clare said, “Now there’s a job title I’ll struggle to ever top, and yes, it’s very much a real role, and possibly the best one in the world”. It certainly caught our eye to see a brand, in the midst of the crowded, potentially bandwagon-heavy period of Veganuary, make genuine movements to tend to vegan customers for the long haul instead of for the sake of it.
LBB’s Addison Capper chatted with Clare to find out how her agency experience will stand her in good stead for life at a brand and to pick her brains on which brands are nailing the vegan conversation better than others.
LBB> Congrats on the new role! What was so appealing about this opportunity that you couldn't pass up?
Clare> Thanks so much! Well, apart from the opportunity to boast the best job title in the world and get paid to eat pizza, this is an absolutely huge step forward for the vegan community. I couldn’t pass up the opportunity to expand Papa John’s vegan offering, using my knowledge, experience and contacts in the vegan food world.
LBB> What is it about the Papa John's brand that made you keen to work for them? Are you personally fond of it outside of work?
Clare> If you consider ordering one pizza a week ‘fond’, I suppose you could say that I’m pretty fond of it! Seriously though, I think Papa John’s is incredible. It was the first big national pizza chain to properly embrace veganism and give vegans the pizzas they’d been craving. Since the launch, the team has made continual efforts to increase and improve the range. They’re very popular in the vegan world!
LBB> Obviously veganism is particularly hot at the moment - what are your thoughts on how big brands are getting to grips with it?
Clare> I think most brands are doing an amazing and important job. For me, the biggest barriers that stop people from trying vegan food or turning vegan are taste and accessibility. Currently, lots of people don’t have access to independent restaurants or can’t afford to eat there so it’s important that big brands are offering these options which are available to a much wider range of people. The big companies are also the ones with budget to inject into their vegan developments, to ensure they taste as good as they possibly can. So, I think it’s important that they’re adopting veganism. Are all of the big brands currently doing a perfect job? No. I think lots of brands are still struggling with the concept of veganism and getting their products just right, but this is only going to improve as veganism continues to grow. This is why I hope we see more chief vegan officer roles!
LBB> How important is it for them to be part of that conversation? And is there reason for them to be wary of being seen to be jumping on a bandwagon?
Clare> For me, it’s incredibly important that they’re a part of the conversation as that will be how big change occurs quickly, but it’s also very obvious when a brand has jumped on the bandwagon and this could end up being quite damaging. My advice would be to hire a vegan food consultant for your menu and to ask vegans to test your products before you launch. There may be things you need to take into account that you haven’t even considered and it’s best to go straight to the vegan world for advice on this.
LBB> Which big brands do you feel have navigated their vegan offerings particularly well?
Clare> Apart from the obvious (Papa John’s), I think Wagamama and Gregg’s have both done a great job. Wagamama was one of the first to introduce vegan options and, for me, it’s still the strongest restaurant chain for vegan options. The team has collaborated with vegan chefs and made a real effort to innovate and create really exciting dishes such as the vegan egg. Gregg’s wins on the marketing front. The team just gets it! They understand that vegans are just regular people who want to eat what they used to eat, without the animal cruelty or environmental impacts so they’ve nailed their offering by creating vegan versions of their most popular products.
LBB> Do you think the vegan conversation is here to stay? Do you feel that it could become less of a 'thing' and more of a norm?
Clare> Oh, absolutely. It’s not just a conversation, it’s a movement and it’s only going to keep growing and growing. It’s understandable that it’s discussed so much and that it’s become a ‘thing’, because anything that goes against the norm or challenges perceptions will be considered ‘strange’ at first, but I think it’s slowly becoming more accepted. This is another reason why it’s so important for big brands to create vegan options, the more people are exposed to them, the more normalised veganism will become. For example, look at the difference in reaction between the launch of the Gregg’s sausage roll and the Gregg’s steak bake. People are getting used to veganism.

LBB> Tell us about the Little London Vegan - when did you begin blogging under that title and how did you build up the following that you have today?
Clare> I always hate admitting this… but I originally started my page as a meat recipe page! It’s followed my journey through being pescetarian and vegetarian and eventually to veganism. Somewhere along the way, I decided I liked people cooking for me more than me cooking for myself and decided to make it a restaurant review page. I’ve built my following through posting what I’m passionate about, and that’s food. Too many people try to start a blog for the sake of starting one. For me, it’s got to be your passion. If you’re not passionate about it, why would anyone want to follow you?
LBB> How important is the role of the influencer for brands when promoting specialist new products like vegan ranges?
Clare> Incredibly important! Unlike other methods of advertising where you hope to reach a certain demographic, influencers allow brands to advertise to the exact people advertisers are trying to reach. It’s a targeted way of getting specific information to the exact people you want it to reach and I really do believe that anyone who isn’t using influencers to promote their products is missing a trick!
LBB> Tell us more about your new role - what will it involve? What are your main aims and ambitions with it?
Clare> I’ll mainly be helping the team develop their range of vegan products and expand their plant based offering by suggesting new recipe ideas for pizzas, suggesting new products I think could work, keeping them up to date on the newest developments in the vegan world and helping to take their vegan range to the next level. I want to make sure that vegans are being given the options they want the most and making the pizzas as appealing to non-vegans as possible. I want vegans AND meat eaters to eat these products and think “WOW”.
LBB> As you mentioned, Papa John's was quick to launch a vegan menu, and has offered vegan cheese and sides for around a year now. How will you be looking to expand on this?
Clare> I was so impressed by how quickly the Papa John’s team launched their vegan menu and they did a great job but I can’t wait to be the one to help expand it even further. I can’t give too much away at this stage but I already have some exciting ideas to put forward to the team and some award-winning products which I’d love to see them collaborate with. They could really change the game!
LBB> When discussing Papa John's vegan items with consumers, are you aiming mainly at current vegans or others that might be generally looking to cut down on animal products?
Clare> A bit of both! I want Papa John's products to be so good that vegans will choose them over our competitors and that meat eaters won’t believe they’re vegan. I want to give people an easy, delicious way to cut down their meat, and I want to make sure Papa John’s continues to produce some of the best vegan options around!
LBB> You've worked in communications for advertising agencies for a long time - how will your lessons learned from then feed into this new role?
Clare> I have indeed! This will be a little bit of a change for me as I won’t be running the social media and marketing, which is what I’m used to doing, but I want to harness my Instagram page as much as possible to gain insight into what people want from the Papa John’s offering. I’ll also potentially be involved with some PR campaigns where my comms skills might come in handy!