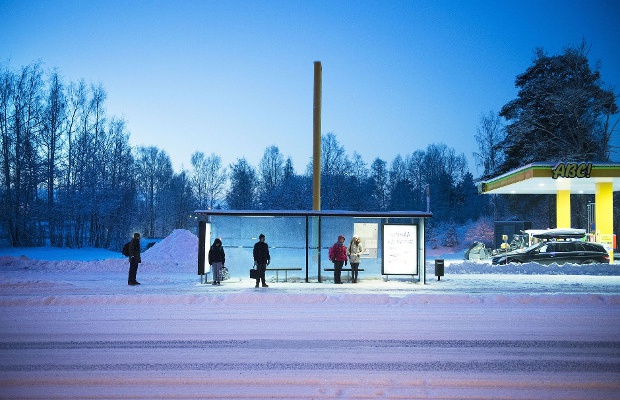 “Us Finns don't really enjoy small talk,” says Tuomas Karvonen, business development manager at Helsinki-based creative agency Superson. “We tend to be quiet in public places.” You don’t have to meet many Finns before you work this out- however, it’s been posing a problem for one of the agency’s clients.
Burger King’s drive-thru restaurants provide a user experience designed by Americans, who have quite a different approach to interaction. Tuomas and his countrymen weren’t best suited to the experience. “You have to yell at the microphone to get your order through,” he says disapprovingly.
Thankfully, another national trait of the Nordic country provided the solution. “Finns really like to laugh at themselves,” says Tuomas. “We are the masters of self-deprecating humour. Every Finn knows the stereotype of us being a shy and introverted nation, but we are OK with it and don't take it too seriously. It is often a topic that people just joke around.”
That’s why in the spring, Superson helped Burger King open the world’s first 100% silent drive thru in Helsinki. At ‘Silent Pick Drive’, customers could now order, pay and pick up their food from the restaurant without any kind of verbal communication or waiting - the perfect Finnish UX.
The stunt to promote the fast food company’s new app resonated with Finns who (as you can tell from these photographs of Finnish bus stops, strongly believe in personal space ).
It resonated with shy people around the world, drawing admiration online from Brazil to the USA and Thailand, with many demanding Burger King bring this service to their countries. One Reddit commenter was so enamoured with the idea that they pronounced “Finland is my spirit animal”.
Being in touch with the local national character is something Superson takes pride in. “Finns are honest and genuine,” says Tuomas. “When we finally say something we really mean it. Also, we tend to be really modest - even sometimes a bit too modest, which also reflects on our marketing scene. Here the American self-bragging style rarely works in advertising.”
Superson put this understanding to use for another Finnish brand, Kyrö Distillery, earlier this year. The alcohol producer had secured sales booths at various summer festivals and wanted to steal the show. So it tapped into that self-deprecating humour Tuomas mentioned. Acknowledging that the Finnish summer feels like it sometimes only lasts a day or two, the campaign asserted that no one wants to spend that precious time waiting in line. So Superson decided to recruit professional queuers, who could stand in the drink line, allowing other festival-goers to enjoy the fleeting good weather while it lasts.
Outside of his agency’s work, Tuomas highlights RBK Communication’s 2017 Cannes Grand Prix winning campaign for the Bank of Åland. This saw the invention of the world's first credit card that tracks the carbon footprint of your purchases and then allows the consumer to offset it by donating to organisations that help clean up pollution in the Baltic Sea. Finns are proud of their country’s natural beauty and want to protect it, says Tuomas. “This case brought out the meaning of nature to Finns,” he says.
“Many brands have played with the fact that we are the happiest nation on earth,” says Tuomas. That’s an assertion that the UN has validated two years in a row and it’s a fact that Finns are understandably proud of. The best campaign built on this insight, in Tuomas’ view, was Rent a Finn for Visit Finland. The agency SEK, part of Grey, made a site where tourists could rent their very own Finn to be their ‘happiness guide’ during their visit there.
Despite paying for advertising in only 10 markets, earned media helped the campaign reach 1.4 billion people across 150 countries. It was a huge success in national branding, especially considering the fact that tourism in Finland generates about $17 billion annually and employs 140,000 Finns.
Tuomas is proud of Finns’ Finnishness in their advertising and thinks it’s something the international industry would do well to pay attention to. “Speak to local culture,” he says. “We are living in an increasingly globalized world but there are still different cultural insights and aspects that brands can utilize in single markets. Burger King is a brand that has truly mastered this.
“Too often we see big campaigns that are just translated word for word to different markets. In my opinion, these are always super boring and I wonder, do they even drive results?”
Picture credit: bvirtanen007 from imgur

Jaloviina: From a Viral Phenomenon into a New Product

Whopper with a Side of Silence Please, Burger King's Silent Drive-Thru Case Study