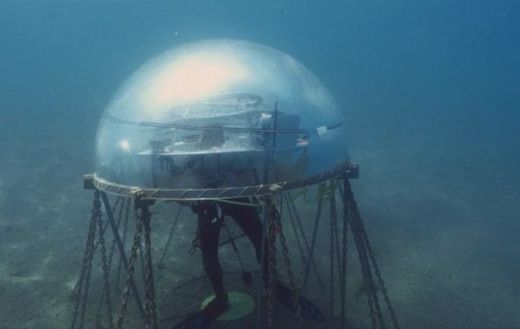 Valenstein & Fatt has launched the latest series of Human Made Stories on Sky Atlantic for Volvo, directed by Pulse's D.A.R.Y.L.

Human Made Stories is a part of Volvo’s brand platform: ‘Human Made’. Human Made reflects the brand’s belief that the most meaningful innovations come from a true understanding of people. Human Made Stories celebrates individuals who share this philosophy and who, through their relentless pursuit of craft and human-centric innovation, are about to change our world.

The first film in the new series, ‘Nemo’s Garden’, tells the story of an Italian father and son duo who, in response to diminishing availability of viable farm land and increasingly a volatile climate, have devised a way to grow crops in the last place any farmer would believe possible –  the ocean. As rising populations and climate change put more pressure on limited viable agricultural land, growing crops on the seabed could be an alternative solution to future food security.

The film shows their pioneering journey revealing how growing crops – such as basil – has become a challenge to farmers (despite having no farming experience themselves prior to the project) due to threats such as vermin, disease, floods, catastrophic loss of entire harvests from prevailing weather conditions. However, a solution is found with an experiment to grow plants on the seabed instead, where temperatures are more consistent. While early prototypes fail due to the action of the waves, the family persevere and finally create and develop individual biospheres that are anchored to the seabed which successfully yield a crop of basil.

This is followed by the next film in the series, ‘Music of the Mind’ which tells the emotive story of a talented young violinist, Rosie, who suffers a catastrophic accident that robs her of her ability to play the instrument until technology allows her to re-join her orchestra many years later. The six-minute film features a friend of Rosie describing what an exceptional musician she was until the accident, which leaves her almost totally paralysed and with severe brain damage.

29 years later, professor of computer science, Professor Eduardo Miranda develops technology that allows reads her brain activity allowing her to compose music, which is played by someone else. Rosie is therefore able to re-join the orchestra where she previously played with her friend. This breakthrough technology has the potential to provide the means for all sorts of patients to express how they are feeling without the ability to move or communicate with words. It could grant them the power, and joy, of expressing themselves through music.

Georgina Williams, Head of Marketing at Volvo Car UK, said: “These films are beautifully made and incredibly inspiring, and really bring to life the Volvo philosophy of human-centric innovation. We know that viewers have actively enjoyed seeking our other films in the Human Made Stories series, so we’re looking forward to see how these new ones are received.”

Andy Lockley, Creative Director: “These remarkable stories depict people who are doing amazing things in the space of human-centric innovation, in turn they share the same values of the Volvo brand and the way in which they design their cars. It’s been a true honour to be part of the journeys of these unique individuals.”

Human Made Stories will air on Sky Atlantic as part of Volvo’s sponsorship deal with the channel. ‘Nemo’s Garden’ breaks on 22 August and ‘Music of the Mind’ will break on 29 August, both films will be available on Sky On Demand for 12 months. The campaign is supported by two 30 second trailers, 24 idents, plus pushes through social and digital. The films where directed by D.A.R.Y.L through Pulse Films.

Tom Player at Wake The Town