Dive into the Delicious World of Lizzo's Shopping Cart with Instacart

Partnering with Droga5, Instacart also debut its new campaign at the VMAs with a snackable dress worn by SNL's Chloe Fineman 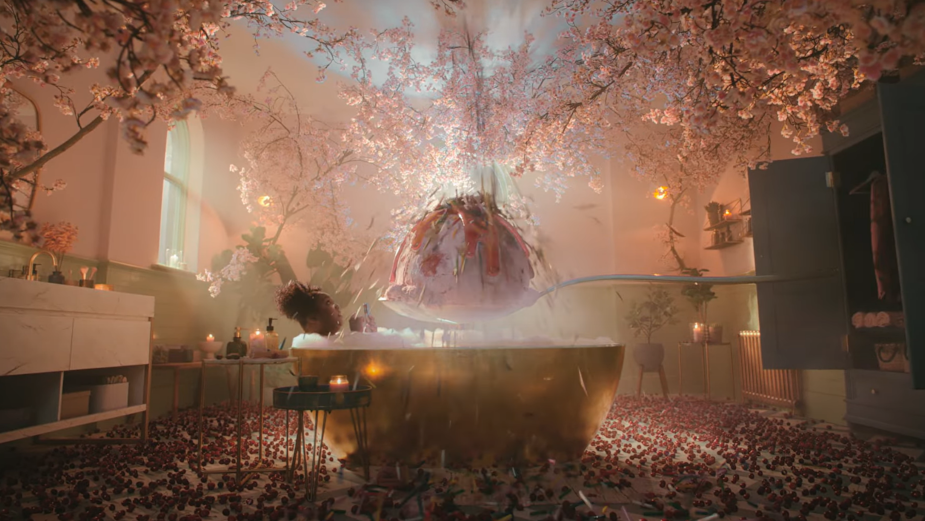 On August 28th, 2022, Instacart, the leading online grocery platform in North America launched a new campaign, ‘The World Is Your Cart, ‘ featuring award-winning singer and songwriter Lizzo. It debuted during the VMA’s last night following the performance by Lizzo.

This new creative platform, with a fresh new look and feel, is a journey from the everyday to the extraordinary. It’s a celebration of the limitless potential we have at our fingertips. Even from a bathtub.

Instacart’s insight is that carts, inspired by excitement and wonder, say a lot about each person. The campaign showcases a world where every time you add an item to your cart, that item opens up a world of possibilities.

Every cart is yours to fill, explore, curate, craft, pack, care, order and have delivered straight to your door. Instacart has endless order options, from chargers to cherries to flowers for your mom.

Instacart chose award-winning singer and songwriter Lizzo to star in the film, along with her mom, Sheri. In the film, we dive into what the world looks like in Lizzo’s cart, from a giant spoonful of vegan cherry ice cream to a Takis dust storm. The spot also features a scored version of ‘The Sign’ from Lizzo’s latest album Special.

Droga5 partnered with director Sam Brown, who has created award-winning work and music videos for artists such as Jay-Z and Adele, to bring this film to life. His collaboration, attention to detail and vision for craft on a very ambitious shoot were exactly what we were looking for,

The campaign will launch across broadcast, linear, OLV, DRTV and social.

Debuting its newest campaign ‘The World is Your Cart’ featuring Lizzo during the show, Instacart also took on the red carpet with Chloe Fineman dressed in ‘Cart Couture’ a look made by threeASFOUR for Instacart

The VMAs, like other award shows, is a three hour long event with often tight restrictions on food and beverages. Attendees previously have snuck in food to these events to keep them going. Hacking the VMA’s ‘no outside food policy,’ the look, worn by Chloe Fineman was created to bring celebs their most favourite snacks right to the red carpet and into the VMAs

It was designed to incorporate a variety of snack textures, like rock candy, gum balls, gummy bears and more with a pop of orange as a nod to the Instacart brand.

From concept pitch to live on the Red Carpet took three weeks, securing and working with threeASFOUR and Chloe Fineman to bring this look from the seed of an idea to real life on the red carpet.

The look uses holographic vinyl, holographic PU, silver nylon, metallic organza, organdy, duchess satin and polyfil to playfully imitate a cart and popular snack packaging. It also incorporates a variety of snack textures, like rock candy, gum balls, gummies and more with a pop of orange as a nod to the Instacart brand.

Laurie Howell, executive creative director, Droga5 said, “This campaign is all about demonstrating Instacart’s endless possibilities, inviting us to play with the app and have fun with what a cart could look like. Playing with the idea, ‘the world is your cart’, and it can be whatever you want it to be.”

Maria Lee, creative director, Droga5 said, “With the brand campaign debuting during the VMAs this year, featuring Lizzo who’s been nominated in four categories and performing live, it made perfect sense to target the show to continue the buzz in real-time on social. Fans can’t get enough of who wore what and the drama that unfolds on the red carpet, so finding a way for Instacart to infiltrate this conversation online was key for us. Haute couture but playful, unexpected, and mischievous since we’re breaking the rule was the brief we gave ourselves. How do we create a look that embodies the idea of a cart that’s designed to hold and deliver snacks in a surprising way? We tapped into ThreeASFOUR as their fashion style is anything but normal. They’re known to push boundaries in the industry and were the perfect partner for bringing this to the red carpet.”

threeASFOUR said, “This was a crazy fun project and an Impossible task in such a short time…. It took a full team effort of 12 people for 12 days (122 hours) between conceptualising, sketching, presenting, draping, pattern making, problem-solving, sewing, fitting, and finishing using alternative materials to complete this garment. Approximately 222,000 pieces of candy were used to create this garment that serves as a human shopping cart of the future. Gumballs, tic-tacs, lentils, rock candy, gummy bears, and Twizzlers are held in tubes of fabric and used as piping on the seams of the look and bolero to give the Illusion between candy and beading. Quilted pockets are used for the unveiling of food spilling out of the garment, and threeASFOUR’s signature Kidney bags were filled with snacks as detachable ‘scales’ on the tail of the dress used for smuggling snacks into the venue.”

“We were drawn to the Scandalous and performative aspect of this project and the challenge of creating a sophisticated, elegant couture gown, where the silhouette is subject to the practicality of pockets and compartments to hide snacks and ultimately sneak in food.”