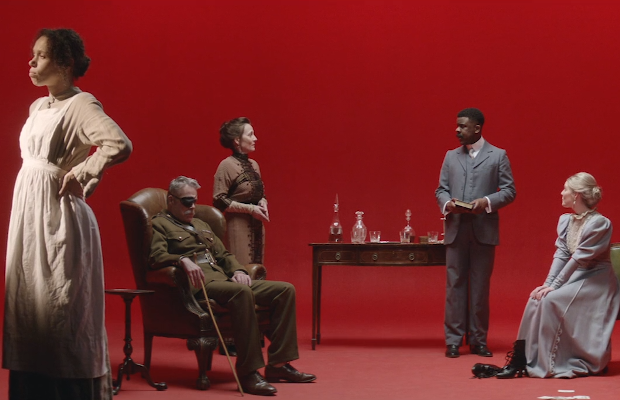 What’s the point of it all? It’s a question we’ve all asked ourselves at various stages of life, but for the characters in Danny Sangra’s new short film, ‘Parlour Games’, it’s an especially pertinent one.
The premise is simple; five people from various walks of life inexplicably find themselves in a room together, posed with a high-stakes proposition. One of them will die, and another will have their dreams come true.
It’s an enigmatic film, and nothing seems clear throughout the eleven-minute runtime. You can see for yourself by watching the full film below:
To try and unravel the mystery, LBB’s Adam Bennett spoke to Danny.
LBB> The casting for the film works brilliantly - what did you have in mind when thinking about actors for these roles?
Danny> The only person I had written the part for specifically was Vinette Robinson (who plays Ida, the servant girl). The woman in black I couldn’t help but imagine as Margaret Clunie, whom I’ve made many films with, so I know how she can bring humour to a scene.
Margaret helped gather the rest of the cast. I knew it had to be a group that nobody had seen me work with and could handle the style of dialogue. They were an amazing cast to work with, it also helped that they had all worked in period dramas, films and TV shows.
LBB> What did you base the characters on when you wrote the film?
Danny> There was a class element involved. I gave them all backstories and names, however none of that comes up in the film. There were embodiments of class differences and their outlooks on life. I didn’t really base them on anything else. I tend to just start writing and have the characters lead the way.
LBB> The only time the background isn't red is when the woman is setting out the rules at the start of the film- why did you want to change the background to black for that?
Danny> Really, it was to show that it’s not a literal room. Also, she’s the rule-setter, so she exists outside of this group. The black background creates that separation.
LBB> Where did the idea first come from? Is it something that had been marinating for a while?
Danny> I’d always wanted to make a parlour film. I have recently got into writing period pieces so it felt right. I love the rhythm of dialogue in Rosencrantz and Guildenstern Are Dead and I think I had that in my head. I was reading a lot of Albert Camus at the time too, so the film became much more allegorical than my previous work.
LBB> The central question for the characters for most of the film is whether to stay in the room or to try and leave. But the fact that the characters can't seem to get out when they try to leave renders that question quite meaningless. Is there a deeper message hidden in that?
Danny> Yes, it is meaningless. Clearly it’s not a literal room. The characters are often talking about their own lives, so it depends on your viewpoint of life. This film proposes that it’s all absurd. You stay or you leave, ultimately you end up in the same situation. It’s just the bit in the middle you need to think about.
I’d rather people take from it what they will, without a set explanation from me. You might see something that I didn’t see!
LBB> What's the significance of the colour red?
Danny> There’s no deep meaning. I watched A Charlie Brown Christmas and there’s a scene in the auditorium that made me want to place the cast in my version of a Charlie Brown school play. Then I thought that even if people didn’t like the film, the image would be bold enough to stick in their head.
LBB> We never find out what happened to the woman who chooses to stay - do you know what happened to her?
Danny> Yes. I know what happens to her. I’m not going to explain every detail, but she’s happy. And that’s all she wanted anyway.
LBB> What would you have done in that room?
Danny> Like most people, I’ve stayed in the room.
'Parlour Games' was written and directed by Danny Sangra, and produced by Lief.