Created by Edelman Deportivo, the pungent fragrance aims to raise awareness about much food goes uneaten by Swedish households 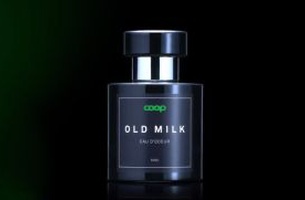 Food waste is a global problem and Sweden is no exception. More than 30 percent of the food in Swedish households is wasted, according to the Swedish Environmental Protection Agency. Instead of trusting our own sense of smell and taste, we throw away groceries that has passed their best before dates, even though they’re still edible. To help people reduce their waste, Coop, one of Sweden’s leading grocery chains now launches Old Milk – a fragrance that smells just like milk gone bad.

“Food waste is one of our biggest global sustainability challenges we’re facing today. With the fragrance Old Milk, we want to make people decrease their food waste at home, by helping them understand the difference between drinkable and undrinkable milk. Don’t be afraid to smell, taste and look at the food before you throw it out”, says Anneli Bylund, Acting Head of Sustainability at Coop.

Swedes can order free samples of Old Milk at coop.se/oldmilk and learn more about how to decrease food waste at home along with tips and recipes for dishes done on leftover food. The purpose of the fragrance is to remind people how bad milk smells and to raise awareness about the enormous food waste produced by Swedish households. According to a study conducted by Coop, 38 percent of Swedes don’t eat food that has passed its best before dates. According to the Swedish Environmental Protection Agency, 224 000 ton of food and drink is poured down the drain. This equals around 26 kilos of food per person every year. The biggest amount of waste comes from coffee, tea and dairy products.

Battling food waste is an important part of Coop’s sustainability work and Old Milk is not the first initiative to raise awareness around it the past years. Some of their previous efforts is a collaboration with Allwin, who helps distributing food from Coop to nonprofit organizations and Whywaste, who through the software Semafor help stores identify groceries on the verge of passing their best before dates. Coop are also collaborating with renowned chef Paul Svensson and his pop-up restaurant ReTaster, who turns leftover into new food experiences.

Coop has won several awards for their sustainability work in 2018. The Sustainable Brand Index named Coop to be Sweden’s most sustainable brand in 2018 and Differ acknowledged Coop as the greenest brand in Sweden.