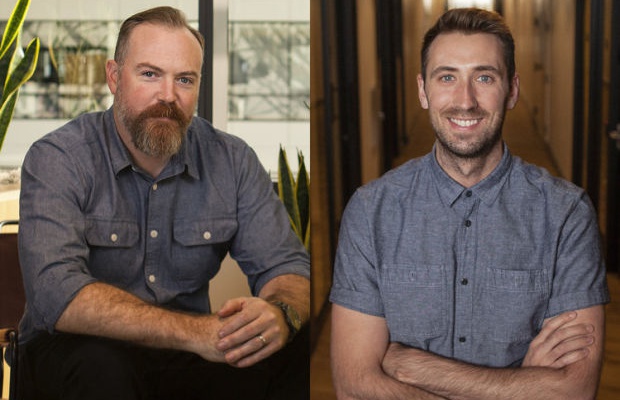 Creative marketing agency Compadre has bolstered its creative team with the additions of Curtis Doss as executive creative director and Mika Saulitis as director of creative strategy.
Curtis will be responsible for leading design and creative teams while Mika will lead brand strategy, positioning, and marketing assignments for the agency. The two will work closely with Compadre co-presidents Chuck Carey and Robert Blatchford and a team of creatives, strategists, writers, designers, directors, and producers.
“Curtis has a natural ability to translate client challenges into beautifully designed solutions and create identities that capture each brand’s unique sensibilities,” says Robert. “Mika is a master of distilling complex information into simple messaging that can elevate and grow brands. Both will play a crucial role in shaping the ‘big idea’ for our clients.”
Curtis is Compadre’s creative leader, visual problem solver, and office DJ who brings kindness, curiosity, and a strong beard game to his role as executive creative director. He is a three-time Emmy nominee and Emmy winner for his work on ESPN’s Monday Night Football. Prior to joining Compadre, Curtis served as creative director at design agency Big Block and creative services company BigStar, where he led creative teams in entertainment marketing, sports branding, and main title design assignments. He also served as art director at Planet Earth Skateboards and DC Shoes, where he focused on skate, surf, and snow markets.
"We've assembled a group of very talented people who all bring a vast range of skills to the table,” says Curtis. “Merging our collective experiences felt incredibly organic once we all started collaborating, so we’re poised to create some amazing work together.”
As director of creative strategy, Mika is Compadre’s lead strategist, head marketer, and office cat person who brings wit, focus, and an irrational love of Flo Rida’s discography. He has developed positioning and integrated marketing campaigns for clients including Disney, Warner Bros., Sony, and FX. Prior to joining Compadre, Mika served as senior creative strategist at creative branding agency Loyalkaspar, and as communications manager at brand consultancy Troika.
“It's really exciting to be part of a new agency that’s built specifically to take advantage of the opportunities and technology in today’s market,” concludes Mika. “Compadre feels like a playground for exploring new ways to create brand strategies, narratives, and experiences.”