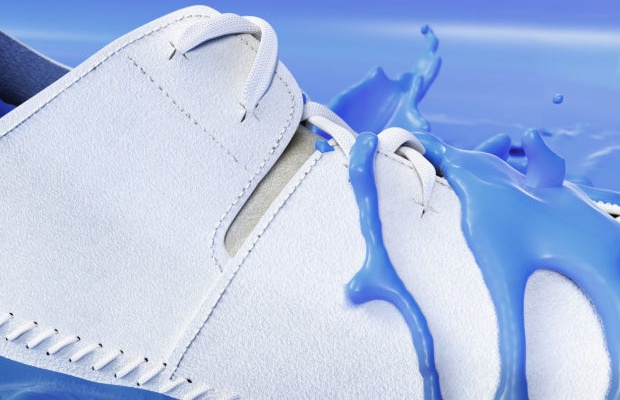 Footwear brand Clarks Originals has launched two new shoe collections for SS19 with beautifully designed CG motion graphic campaigns. The roll outs unveil the brand’s new ‘White Out Pack’ and ‘Trek’ shoe collections with a series of funky animated films and stills. Bolder Creative were brought on board by Clarks Originals to craft the creative for both campaigns.
Launching the brand’s ‘White Out Pack’ range, Clarks’ Kiowa Sport, Trigenic Evo and Trigenic Flex designs were given an innovative update that is demonstrated through three unique films. The distinctive suede shoes were reimagined in an optic white Scotchgard suede, which is stain and water resistant, with new boldly-coloured soles.
In the films, the completely white shoes are engulfed by colourful bursts of CG-crafted paint. To demonstrate the incredible non-porous fabric, the liquid runs artfully from the Scotchgard Suede, but brightly attaches itself to the soles of the shoes to form the newly designed colourways.
Key to the animated sequence of films was ensuring that the points of difference between each shoe were highlighted whilst ensuring stylistic continuity. David Farquharson, senior motion graphics designer and director, at Bolder Creative, says: “The fluid simulations were created using Houdini, to heighten the shoes’s ability to repel the saturated paint. We achieved this through the careful art direction of the fluid simulations as well as the resulting interactions between the paint bursts and the shoes.”
Bolder’s original take on the briefs was key to the partnership, David adds: “We stayed true to the concept but added extra details and unique characteristics into the sequences, this meant we could highlight points of difference between each of the three shoe designs. We achieved this through the angle’s interaction between the paint bursts and the shoes. The originality of the ideas was praised by the client and ultimately won us the job.”
In a separate campaign showcasing the ‘Trek’ collection, two 15-second films show the evolution of the iconic Desert Trek style as it metamorphosises into a newly released iteration of the shoe. The animation begins with the original Desert Trek before its form peels away to reveal the new Trek Formed design. The spot maintains an engaging pace and energy whilst carefully showcasing details of the newly evolved style.
Bolder carefully choreographed the transition between the component parts of the products to deconstruct the Desert Trek shoe and birth the redesign. The timing and movement of the elements was integral, says David: “We had to complement and respect the original Desert Trek model whilst injecting a new energy to reveal the brand-new Trek Formed shoe.”
The studio crafted CG models of each of the shoes from scratch. This involved multiple rounds of progressive development and three-dimensional scans of the shoes to capture the unique elements and textures. Using Cinema 4D and Octane, Bolder combined texturing, lighting and rendering with the three-dimensional product models to ensure the characteristic of each shoe was accurately embodied.
“Clarks Originals were fantastic to work with. They gave us the freedom to approach the brief with creativity and style whilst really pushing a positive way to produce a highly detailed and striking campaign” says David at Bolder Creative.
The full ‘White Out Pack’ and ‘Trek’ campaigns include print and digital stills as well as social edits which launch on online, on social media and at Clarks Originals flagship stores.

The Materials Only Motion Graphics Can Capture

From London To Brighton: Why Bolder Creative Moved to The Coast