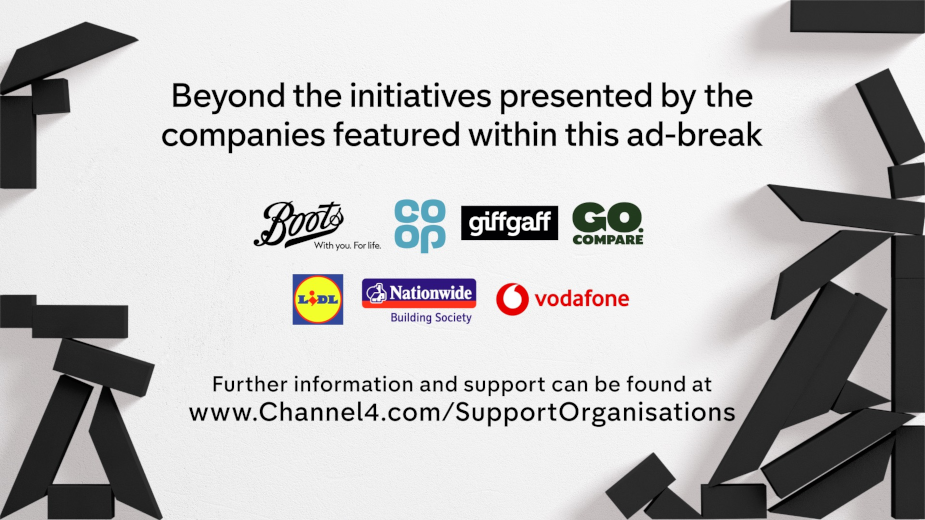 Channel 4 today reveals an exclusive collaboration with seven brands to help combat the ongoing cost-of-living crisis in a one-of-a-kind ad break, which will run during Steph’s Packed Lunch and Gogglebox on Friday 7th October.

The bespoke ad break will feature ads from Boots, Co-Op, giffgaff, Go.Compare, Lidl, Nationwide Building Society and Vodafone, who are providing offers to help viewers save money or services to help support viewers and communities during the cost-of-living crisis.

The ad break begins with a short introduction from Channel 4 explaining to viewers that there will be a special ad break of organisations that are trying to do something to help during the cost-of-living crisis. Following this, each participating brand’s ad will air one after the other, concluding with an outro directing viewers to a specially created Channel 4 website offering further information and support.

Martin McAllister, creative leader, Channel 4 said, “We are really proud of this campaign which brings together some of our advertisers who have initiatives to help during these tough times. In doing so, we hope to achieve more prominence for the support they are offering audiences."

The unique partnership was brokered by 4Sales and Carat (Co-op and Vodafone), Havas (giffgaff) and Hearts & Science (Go.Compare), along with Wavemaker (Nationwide Building Society), OMD (Lidl) and Mediacom (Boots).

The idea for the ad break was developed by the 4Sales Creative Hub.