Chaka Sobhani: “If Peppa Pig Can Do It, What’s Stopping Us?”

A panel on ‘Breaking Stereotypes in the Media Industry’ at the UK Creative Festival 2022 turned out ot be celebration of “outsider” status and fuel for allyship, writes LBB’s Alex Reeves 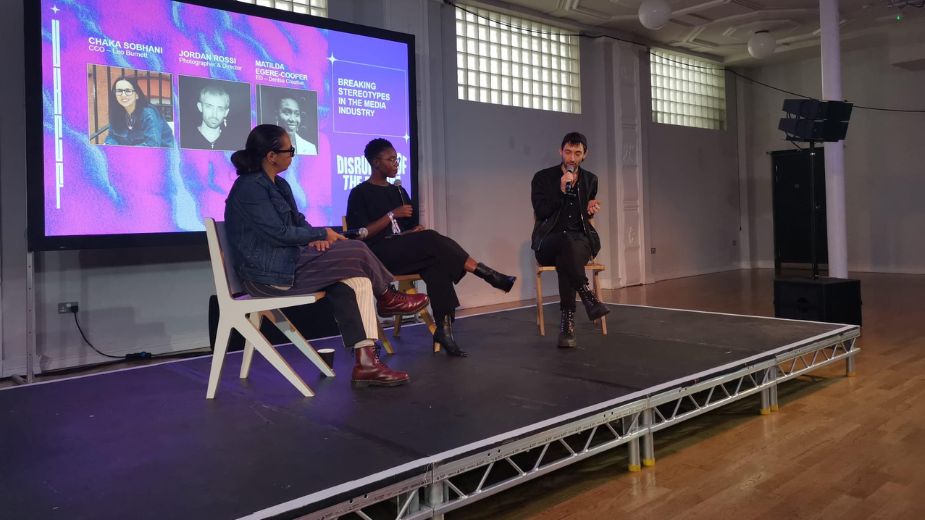 A stereotype isn’t inherently negative, said Matilda Egere-Cooper, editorial director at Dentsu Creative, on the Ballroom stage at the UK Creative Festival this morning, rather it’s a “fixed or oversimplified view”. And the discussion titled ‘Breaking Stereotypes in the Media Industry’ was anything but oversimplified.

When Matilda asked Jordan Rossi, photographer and director and creative producer at RANKIN, to consider the stereotypes he encounters, began by acknowledging the “mass commercialisation” of LGBTQ+ communities that he sees, alongside a performative, sometimes insincere kind of activism. While that often comes from a good place, he said, it’s not always always putting the best practice into that process.

Chaka Sobhani, global chief creative officer of Leo Burnett, said it was important to acknowledge how huge it is  that even in the last decade the awareness of people in underrepresented groups has shifted so much.In fact, she said at times she’s even noticed an “overcorrect”, speaking as a “person who’s in a number of minority groups.”

Like Jordan though, she was clear that the increased discussion of representation has led to an unfortunate situation where “people want to do the right thing but they’re so worried about fucking it up.” She mentioned a fear people increasingly have about having “the wrong conversation”. Her advice is to look for the intent, because it is often good.

Beyond that, breaking stereotypes requires discussion, listening to groups who are underrepresented rather than making assumptions.

At Leo Burnett, Chaka’s dedicated to ensuring representation filters through to senior levels of the business. She said this is important to her as a brown, gay woman, and it’s also important to her because the agency is full of “good eggs”. But she was keen to share that even a large organisation like Leo Burnett is happy to seek expert help with DE&I. When something needs legal attention a business consults lawyers, Chaka said that her colleagues do the same for ensuring they’re representing different groups appropriately, shouting out the Diversity Standards Collective and The Unmistakables.

On the topic of creating a more inclusive workplace, Chaka shared a story of someone who came from the D&AD New Blood Shift programme who she spoke to near the end of her time working at Leo Burnett. While she was grateful for the placement, she told Chaka she felt like a “charity case”.

At RANKIN, Jordan and his colleagues work on making people from underrepresented groups feel welcome with small acts like including pronouns on call sheets and simply making sure there’s a variety of kinds of people around so it doesn’t feel “like a boys’ club” on set. He also talked about flipping a representation-driven brief so that the people not part of a minority group “become the outsiders” in a creative situation – something he’s keen to do whenever he’s working on work around LGBTQIA+ communities.

Jordan’s work on Proud Nation, with Stonewall and Models of Diversity, was prompted by a feeling that inclusion and representation of some of these communities has been tokenistic in recent years. The photo series challenging advertising representation of the LGBTQIA+ community is all about broadening the breadth of representation in these groups, he said, celebrating all the beauty and colour of these people in black and white.

Chaka’s experience over decades in the business has taught her that sometimes “representation of minorities can sometimes be felt to be a political point, as opposed to just representation.” It doesn’t need to be ideological, she suggested, pointing out that now Penny the polar bear has two mums on children’s TV series Peppa Pig. That meant a lot to her family, as a mother in a same-sex relationship. “If Peppa Pig can do it, what’s stopping us!?”

Occasionally Chaka will notice moments in a script she sees, she says, where the boys are playing mischievously and the girls are quietly reading – stereotypes that endure and everyone has to be on the lookout for. It’s in the detail, she said. It requires paying attention at every level of the creative process. “If you don’t, we just slip back into the norms.”

Both Chaka and Jordan reminded us that it’s always worth remembering that organisations that want to change need the “outsider” to come in and change their businesses for the better. They stressed the value of different perspectives. And when you’re in the room, even if you’re hearing disheartening stereotypes, Jordan noted that “at least you’re in the room.” Change begins there, difficult as it may be.

Finally the session turned to the subject of allyship, which the Chaka noted comes from empathy. If you’re straight, imagine if you had to stop and consider who’s around before you kiss your partner, she suggested – as it’s something she as a gay woman has to do. Reflections like this can add up to turning the right intentions so many in the ad industry have into effectively breaking stereotypes.

Jordan’s final tip was elegant: rather than recognising the differences, celebrate them. Look at his work to see this in action.