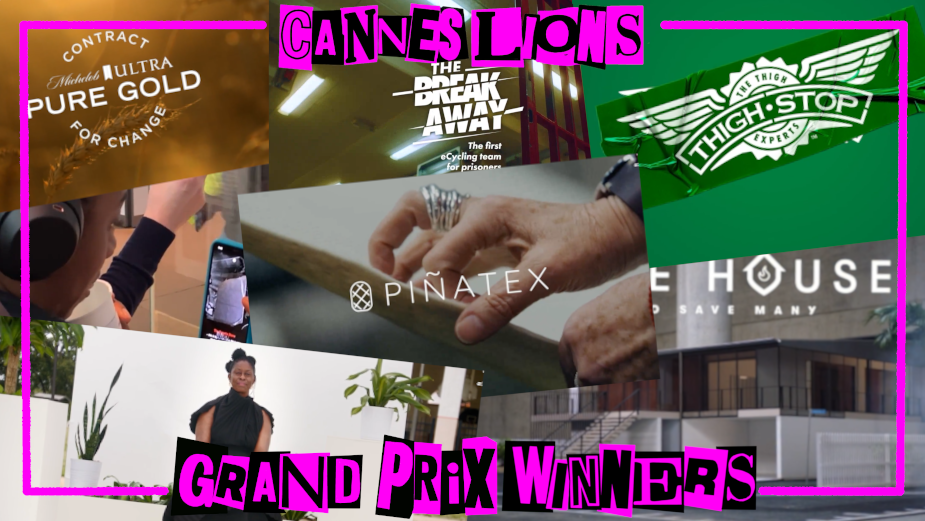 For a complete list of the year's Grand Prix winners - check out this helpful collection.

Celebrating the measurable impact of creative work and effective strategy, this category in the Cannes Lions Strategy Track saw five Gold Lions, six Silver Lions and nine Bronze Lions be awarded, with the Grand Prix going to FCB Chicago and FCB New York’s ‘Contract For Change’ campaign. The campaign, created for Michelob ULTRA’s ‘Pure Gold’ product, attempts to revolutionise agriculture in the US by giving farmers contracts that facilitate their transition to organic farming - promising them a buyer after the three-year transition period is over. The project has already resulted in 104,000 acres of farmland making that switch which will soon be providing crops for use in Michelob ULTRA Pure Gold and other AB InBev brands.

In the winners announcement from Cannes Lions, Creative Effectiveness Lions jury president, Raja Rajamannar, chief marketing & communications officer at Mastercard, said: “To pick the Creative Effectiveness Lion Grand Prix winner is to pick the best of the absolute best. The campaign we chose was not only strong on creativity and effectiveness, it went above and beyond – it is disruptive, game-changing and has impact lasting into the future. It’s a powerful example of how marketing should play an effective role in driving the business, build the brand and play a key role in the entire business value chain.”

The Creative Strategy Lions focuses on “the idea behind the idea” -  how strategic planning can redefine a brand, reinvent its business, and influence consumers or wider culture. This year, the strategic category awarded three Gold Lions, six Silver Lions and eight Bronze Lions. The singular Grand Prix award went to BBDO Belgium’s Decathlon campaign, ‘The Breakaway’.

The Breakaway saw six inmates from Oudenaarde prison in Belgium race with thousands of bicycle riders in the outside world, via the virtual world of Zwift. Using sports as “a means to pursue freedom”, the six anonymous inmates put themselves to the test and ‘broke away’ from detention to try and better themselves - a key aspect of rehabilitation. Each inmate received a bike, a connected trainer and other necessary equipment from Decathlon, allowing them to train before culminating in a race in April.

In a Cannes Lions press release tonight, Creative Strategy Lions jury president, Chrissie Hanson, global CSO at OMD Global, commented: "We believe that the work we elevate to a Grand Prix sends a signal about the values that our industry should hold, and therefore the Decathlon Sports for Prisoners (Belgium) represents the brave and socially conscious moves that are possible when the strategy, media, and retail activations flow directly from the core brand purpose.”

The Unfiltered History Tour is an immersive project that serves as the unofficial guide to some of the most disputed artefacts on display inside the British Museum, told from the perspective of the communities they were removed from. Thanks to Instagram filters and immersive audio, visitors could scan objects including the Rosetta Stone, Parthenon Marbles and Benin Bronzes to unlock an augmented reality that takes you back in time to the moment these items were removed. Accompanying podcasts, featuring interviews with experts from these countries, also brought the immersive experience to life.

The leather industry is one of the largest polluters in the world, but could pineapple leaves be the solution? Dole partnered with Ananas Anam to create a sustainable, vegan and cruelty-free leather alternative, made from the three tons of previously discarded pineapple leaves that are produced with every ton of pineapple. Brands such as H&M and Nike have already begun to use Piñatex in some of their product ranges.

Innovation Lions - One House to Save Money

Just one of each award was given out for the Innovation Lions category, including the Grand Prix which went to Leo Burnett Sydney and Suncorp Group for their ‘One House to Save Many’ campaign.

Working with home resiliency experts, the teams behind this project designed a house that can withstand several natural disasters, including cyclones and floods. In collaboration with the Insurance Council of Australia, the campaign hopes to influence future product innovation and design innovation in housing developments in the future.

In a statement from Cannes Lions tonight, Innovation Lions jury president and CTO at Wunderman Thompson US, Cleve Gibbon, commented: "Every year in Australia, homes are destroyed and billions are spent on rebuilding communities due to extreme weather events. The One House set out to achieve something never done before — it democratises access to resilient housing materials to protect homes against tropical cyclones, floods, and fires. This housing solution was brought to life through a creative brand/agency partnership backed by the Australian government to deliver a commercially viable transformative product. As a jury, we were blown away by the boldness of the idea, the creative bravery of the execution, and the massive societal, environmental and economic impact. One House innovation has started a movement."

Device-driven creativity is the name of the game for the Mobile Lions category, and this year’s entrants received a total of three Gold Lions, seven Silver Lions and ten Bronze Lions. The sole Grand Prix award was won by Google’s ‘Real Tone’ product innovation and accompanying global campaign.

‘Real Tone’ is the name of a collection of technological enhancements made by Google to improve image equity on their phones’ cameras, by undoing racial biases that have existed in camera technology, historically excluding people of colour. The improvements enhance the exposure and white balance capabilities of the Google Pixel, eliminating stray light and blurriness of people with darker skin tones, amongst other changes.

Evolved from the ‘Creative eCommerce Lions’, this new category celebrates the innovative and creative approach to online and offline commerce, payment solutions and transactional journeys. The jury awarded three Gold Lions, five Silver Lions and seven Bronze Lions, as well as the final Grand Prix award of this list - to Wingstop’s ‘Thighstop’ campaign.

In 2021, America ran out of chicken wings. Without hesitation, Leo Burnett Chicago helped Wingstop change all of its branding - both physical and digital - to ‘Thighstop’ and served its customers this different part of a chicken that wasn’t in short supply. Collaborating with Rick Ross, the brand essentially hacked itself - dubbing its own adverts and replacing all traces of ‘Wings’ with ‘Thighs’ to reflect the menu change.

In the winners announcement from Cannes Lions, Beth Ann Kaminkow, global CEO VMLY&R COMMERCE / CEO NY VMLY&R, global, said: "Some work changes the world and some exceptional work demonstrates the transformation that is possible when creativity is unleashed in response to the world changing. In the inaugural Creative Commerce Lions, we are recognising this work that provocatively pivoted - bravely and holistically – to deliver big for both their customers and business. We hope this courageous work will serve as inspiration for commerce-led creativity that's business driving, brand-building, and deeply engaging."