Cannes Contenders: A Pick of the Best from Adland's Indies

Ahead of a week on the Croisette, LBB editors highlight some of their favourite pieces of work from independent and in-house agencies that might take home Cannes Lions 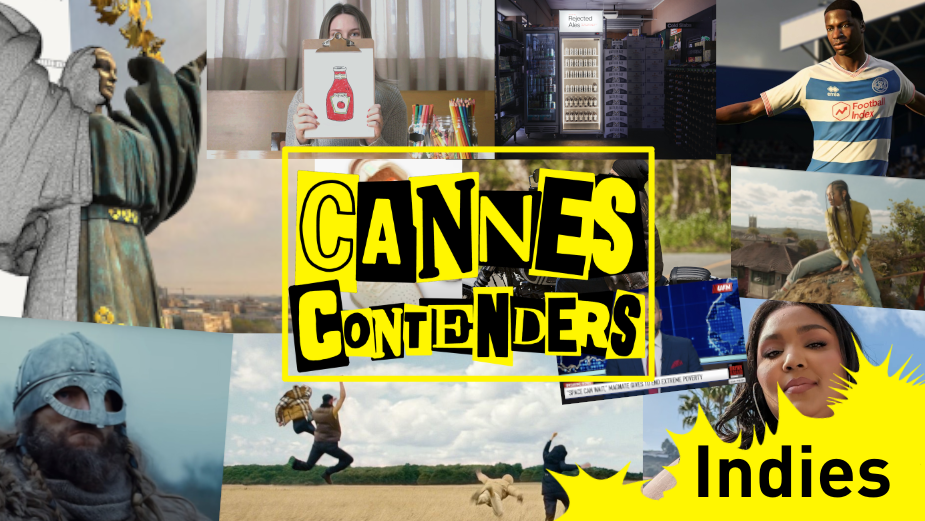 In celebration of the independent spirits who fly the flag for creativity, LBB's editorial team has hunted out some of its favourite creative campaigns from outside of the holding company behemoths. It's a highly personal and subjective collection - and we're well aware it barely scratches the surface of the fantastic thinking and craft from boutiques and indies around the world, but we hope we've spotlighted some sparkling gems ahead of Cannes Lions.

LBB has also asked agency networks to share their  best work from the past year ahead of Cannes Lions 2022 - and some of the bigger independent networks like Serviceplan and M&C Saatchi, if you're wondering about their absence here. Check out all the lists published so far here.

Addison Capper, Americas editor at LBB: “When covering the ad industry, I do my absolute best to not play favourites. But that's difficult when it comes to 'Draw Ketchup' from Rethink. The Canadian agency consistently produces some of the country's most inventive advertising and this piece of work for Heinz is my pick of the bunch.
“Heinz asked people to 'draw ketchup'. The people - apart from one questionable guy who drew mustard - all drew Heinz. Then, their designs made it onto special edition bottles of Heinz tommy K.”
AGENCY: Rethink

Laura Swinton, Editor in Chief at LBB: “Howatson + Company has had a storming year and this integrated campaign for brewer Matilda Bay showcases their wit, verve and eye for detail and craft. Rejected Ales saw the beer brand release all of the rejected recipes it had created on its journey to created the perfect golden ale - the point being, if this tasty beer wasn’t good enough for their master brewers, how good must the final recipe be? 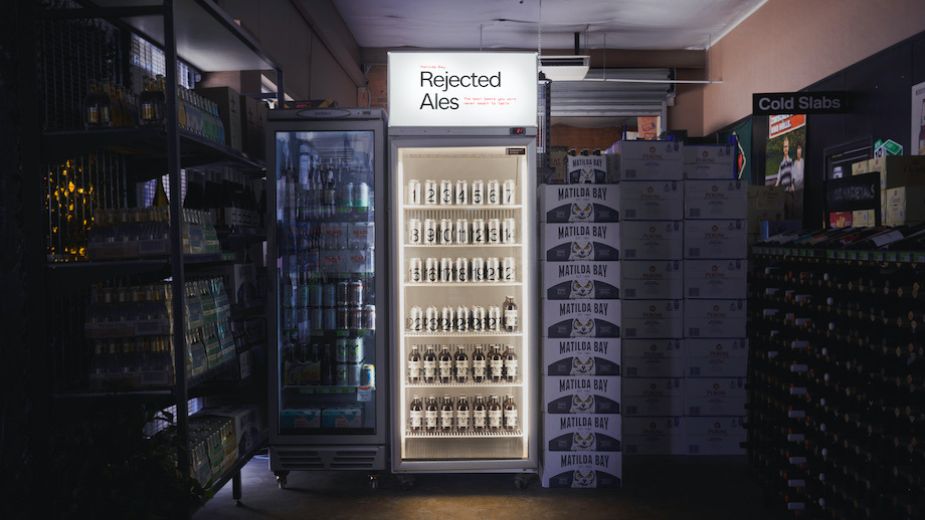 "As a strong, simple idea, the campaign was endlessly spinnable into different mediums and executions, from instore retail displays to deadpan films and popular direct marketing campaigns. The agency team delved into the Matilda Bay logbooks to unearth tasting notes and uncover failed experiments- all of which went into fermenting fantastically authentic copy.”
Agency: Howatson + Company

Alex Reeves, EMEA editor at LBB: “When I interviewed 4creative ECD Lynsey Atkin about Channel 4’s trailer for its Paralympic coverage, she told me ‘it’s no exaggeration to say the film was co-written with the Paralympians.’ And that is the crux of why ‘Super. Human.’ is such a unique piece of work. It’s built on a strong foundation of the real-life experience of becoming a Paralympian, but heightened by the vision and craft of the top-tier team assembled to make it something special.”
AGENCY: 4creative
PRODUCTION COMPANY: Serial Pictures x Somesuch
OFFLINE EDIT: Final Cut
MUSIC: Leland Music
SOUND POST PRODUCTION: Factory
VFX AND ONLINE: TIME BASED ARTS

Alex Reeves, EMEA editor at LBB: “To combat a lack of helmet-wearing in Copenhagen, the Danish Road Safety Council launched this brilliant campaign that poked gentle fun at people who thought they were too cool for safety. Highlighting that the Vikings weren’t too fashion conscious in a lighthearted way, it gets its point across in an amusing way that’s hard to argue with. Simple, fun and with great production values. I’d love to see it pick up some metal for Denmark.”
AGENCY: &Co

Addison Capper, Americas editor at LBB: “This Super Bowl spot from GUT featured a brand-new Lizzo track to help promote 'Real Tone', a new technology on Google's Pixel 6 phone, whose camera better captures darker skin tones. According to Google CMO Lorraine Twohill, the company worked for months with  engineers to get the technology right, adding a significant number of portraits of people of colour to the datasets that "train" the cameras. Each photo featured in the spot was taken with the Pixel 6.”
AGENCY: GUT Miami

Alex Reeves, EMEA editor at LBB: “Part of the role of creative award shows like Cannes Lions is to show the rest of the industry the sort of thing it can be using its expertise for. And while it might feel trivial to be at a festival of creativity while a war rages elsewhere in Europe, I feel that innovative work like Virtue’s here should be lauded for attempting to fix a serious problem. Repurposing the Polycam 3D-capture app to create digital replicas of Ukraine’s culturally important places means that these digital models can be shared with the world, and potentially aid in reconstruction when the war is over. Let’s hope that’s soon.”
AGENCY: Virtue

Alex Reeves, EMEA editor at LBB: “Burberry gets into this list on the technicality that its in-house creative department isn’t part of an agency network, even if calling it an ‘independent agency’ is a stretch. Anyway. We couldn’t overlook it ahead of Cannes Lions 2022. In a less-than-cheery time in human history, escapism is welcome. And this superlative example of film craft is a delight to immerse yourself in. We wouldn’t have expected less from directors Megaforce, especially considering their stunning previous work with the fashion brand.”
CREATIVE: Burberry
PRODUCTION COMPANY: Riff Raff

Laura Swinton, editor in chief: “With xenophobia on the rise in South Africa, Converse wanted to challenge ill-feeling towards people from neighbouring African countries. Agency Joe Public designed an eye-catching series of laces, half carrying designs and colours of the South African flag, the other half designed to resemble the flag of another nation. The finished effect sees the flags interlaced, creating a colourful, stylish effect while also spreading a serious message.”
AGENCY: Joe Public United

Alex Reeves, EMEA editor at LBB: “You don’t usually expect an innovative use of technology to hit on a deep emotional level as well. But when ENGINE Creative and Framestore collaborated with EA Sports to insert Kiyan Prince into their latest FIFA game, it made an impact. Suddenly Kiyan, the football prodigy who lost his life to knife violence in 2006, was alive again and playing for his club QPR, highlighting the weight of a life lost.”
AGENCY: ENGINE Creative
TECHNOLOGY PARTNER: Framestore

Alex Reeves, EMEA editor at LBB: “This is a recent piece of work and I have no idea if it was entered for the festival (if our calculations are correct, it aired JUST before the eligibility window closed), but if this film made it to the jurors I think it will have impressed. As someone who grew up with a much more prosaic tone of advertising from this British home improvement retailer, Oscar Hudson’s dreamlike film has had me transfixed each time I’ve watched it. And reading about what it took to make it happen only enhanced my enjoyment.”
AGENCY: Uncommon Creative Studio
PRODUCTION COMPANY: Pulse Films
SERVICE COMPANY: Icon Films, Bulgaria
EDIT HOUSE: TenThree
POST-PRODUCTION: Electric Theatre Collective
AUDIO POST-PRODUCTION: Factory London
MEDIA AGENCY: Dentsu

Addison Capper, Americas editor at LBB: “Dole, the fresh fruit company, had a waste problem: pineapple leaves. Piñatex is the solution to that problem. The brand is a sustainable leather alternative made from the discarded pineapple leaves, and the campaign to launch the product from Lanfranco & Cordova has already performed well at recent global shows.
“‘You can't help but be in awe,’ said Luis Miguel Messianu, chairman at Alma and DDB's global CCO for McDonald's about it. ‘That something as simple and until now, so irrelevant in our lives, such as the wasteful pineapple leaves, could have such a sustainable impact on the planet’s environment, transforming what seemed as a very distant industry to fruit, such as fashion!’”
AGENCY: Lanfranco & Cordova

Addison Capper, Americas editor at LBB: “Fake news is inherently a bad thing - the spreading of misinformation dressed up as 'news' to often damage someone or thing's reputation. Fred & Farid Los Angeles and Concern Worldwide flipped that on its head with 'Unfortunately Fake News', a campaign that distributes 'fake news' across a number of platforms but with an important message. The fake headlines are made out to be authentic reports on generosity from society's wealthiest people, before a reveal and a plea for donations. "Using social media and physical advertising, this campaign is designed to expose the public to the ‘unjust disparity’ between the ultra-wealthy and those living in poverty -something Concern says is ‘needless and inexcusable’," my colleague Ben Conway wrote when it launched. Check out his interview with Fred & Farid about it here.”
AGENCY: Fred & Farid LA

Laura Swinton, Editor in Chief at LBB: “Heartfelt and impactful, this documentary about Australia’s devastating forest fires was a creative catharsis for the filmmakers at FINCH. And that raw, authentic passion driving the film’s production has been felt by viewers - the film reached 59 million people and inspired 2,500 people to become volunteers. It also opened up conversations about trauma and mental health.”
Companies: FINCH, The Tuesday Club, Thinkerbell

Addison Capper, Americas editor at LBB: “The online gaming era is intense. That person trying to shoot you / score against you / generally beat you does not care one bit that you need to snack or take a much needed sip of water. Enter: Heinz Hidden Spots, a campaign from GUT Sao Paulo. The agency identified the most remote locations on Warzone Caldera, a newly launched (at the time) map on Call of Duty: Warzone. Gamers could head to these locations to take five and maybe grab a bite to eat (slathered generously in Heinz Ketchup). The campaign was extensive. A film showed a gamer eating a burger while playing Warzone before being ruthlessly killed in the game, and Heinz and GUT teamed up with streamers who enlightened their followers to the peaceful locations.”
AGENCY: GUT Sao Paulo

Laura Swinton, editor in chief: “No one combines surreality and the driest of deadpan humour quite like Filipino agency GIGIL, and this spot about a family who are forced to improvise a motorcycle is right in the sweet spot. I suspect the distinctive, earwormy punchline will get under the jury’s skin.”
AGENCY: GIGIL

Addison Capper, Americas editor at LBB: “Canadian laws now allow Sikh motorcyclists to ride wearing their turban - without a helmet. The Tough Turban was designed by Canadian agency Zulu Alpha Kilo to empower Sikh riders to protect who they are, but also protect themselves on their motorcycles. Created in collaboration with Pfaff Harley-Davidson, the design features emerging technologies in protective gear like non-Newtonian foam that hardens on impact, 3D-printed chainmail and a composite fabric used in bullet-proof clothing. The full design considerations for the prototype were open-sourced and released online, enabling any manufacturer in the world access to the virtual blueprint to make their version of a reinforced turban for riders in their region.”
AGENCY: Zulu Alpha Kilo

Laura Swinton, editor in chief: “This film played at the opening ceremony of China’s 2022 Winter Paralympic Opening Ceremony, and it eschews the usual narratives that we see around Paralympic sport to create something more artistic and expressive. The film documents a collaborative art installation, where people with disabilities were invited to express their creativity using their brainwaves.”
AGENCY: The Nine
---
Check out all the other agency networks' Cannes Contenders lists published so far here.
view more - Creative