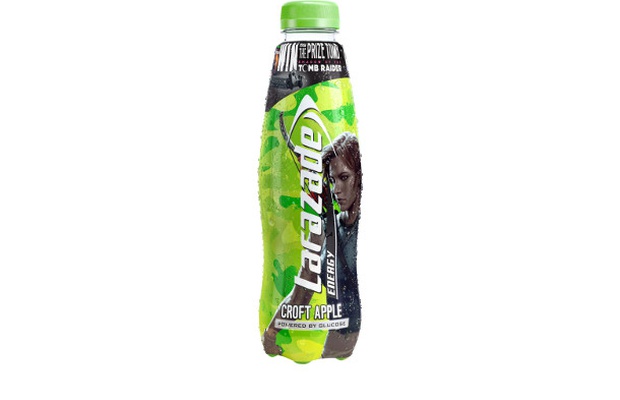 Brand & Deliver has secured brand partner Lucozade Energy to support the September 14th 2018 release of Shadow of the Tomb Raider on behalf of client, Square Enix, publisher of the iconic Tomb Raider video game series.
Following the massive success of the 2013 Tomb Raider reboot and 2015’s Rise of the Tomb Raider, Shadow of The Tomb Raider is Lara Croft's defining moment, where she will ultimately be forged into the Tomb Raider she is destined to be. Owners of numerous “Best of” nominations and awards, the Tomb Raider franchise has sold over 66 million copies worldwide.
Lucozade Energy is running a nationwide campaign in September 2018 to support the release. The drinks brand is changing the name of its Orange and Original flavours of classic Lucozade Energy to Larazade after Shadow of The Tomb Raider lead, Lara Croft, for the duration of the campaign. Lucozade Energy will also introduce a limited-edition flavour, named Larazade Croft Apple, which will be exclusive to Tesco and independent retailers.
The campaign will run across single and multi-packs with more than 80m promotional bottles available in all stockists across the UK & Ireland. Each bottle will feature an on-pack competition to win from the Prize Tomb every day, including Xbox One X games consoles, copies of the Shadow of the Tomb Raider game and over £40,000 in cash prizes. The campaign includes significant shopper activations, outdoor and digital advertising as well as Larazade sampling at gaming events.
Ros Carmoody, partnerships director at entertainment marketing specialists Brand & Deliver, said: “We’re thrilled to create such an exciting campaign with Lucozade Energy and Shadow of the Tomb Raider. The two brands work brilliantly together and everyone involved worked hard to get the most out of the relationship. Lara Croft is such an iconic character and we’re excited for our campaign to help make Shadow of the Tomb Raider an even bigger release than it already is.”
Elizabeth Blackman, Head of UK Marketing at Square Enix, said, “Lara Croft and Lucozade Energy have a long history together, stretching back to 1999. We’re excited for the next chapter in the relationship between the two brands and to see how fans react to the limited edition Larazade Croft Apple flavour.”
Brand & Deliver is employed by a number of leading technology and entertainment companies to handle promotional partnerships, B2C and B2B event activation, branding and product marketing.