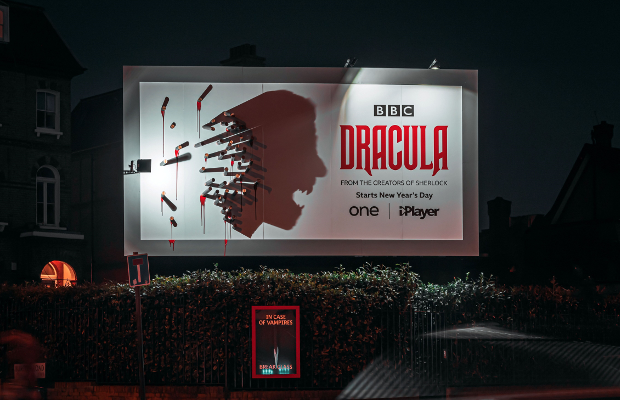 BBC Creative marked the arrival of Dracula to BBC One on New Year’s Day with two specially built posters.
In honour of the bloody legend from Transylvania, the billboard utilises shadow art and stakes to create a silhouette of Dracula’s face that appears as darkness falls, whilst a ‘break in case of vampires’ box has also been erected to create extra fear and excitement.
The posters are on display in both London (on Brixton Road) and Birmingham (on Upper Dean Street).
From the creators of Sherlock, Dracula premiered on New Year’s Day on BBC. The Count is played by actor Claes Bang, who delivers a fresh and new take on the villain from Bram Stoker’s classic novel. ‘Dracula’ TX’s on BBC One (21.00 on 1st, 2nd and 3rd January) and is also available on BBC iPlayer. 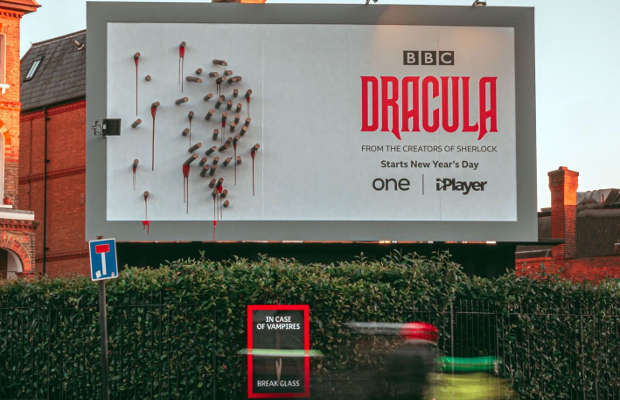 Olly Harnett, creative head, BBC Creative said: "Our campaign for Dracula leaves the audience in no doubt they can expect something fresh and unexpected from this extraordinary adaptation of the vampire classic. Our unique campaign is one of the most ambitious special builds we’ve ever undertaken – by day, a random assortment of stakes hammered into a billboard but by night, transformed, as the Count springs to life in the form of a looming shadow."
Chris Hooper, head of marketing, BBC One said: “Coming from the makers of Sherlock, this version of Dracula is laced with dark humour and rock star swagger. We wanted our campaign to reflect Steven and Mark’s fresh take on a classic character, so each element has been designed to surprise - from the cheeky campaign line, 'Bloody Legend', to the use of Lust For Life on the trailers, and this special build, which takes a playful, tongue-in-cheek approach to the legend.” 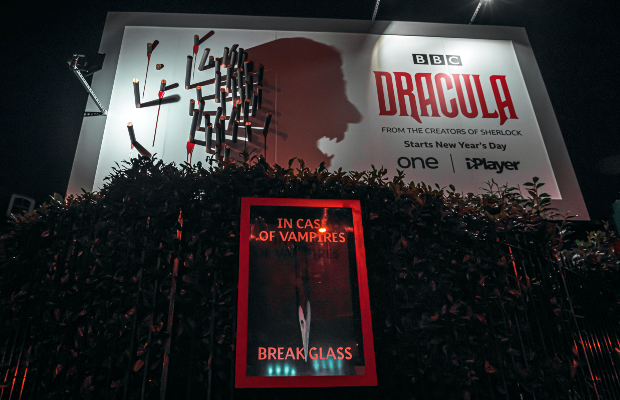