Awakening from the ‘Junk Sleep’ Nightmare with Droga5

You’ve heard of ‘junk food’ before, now be prepared to wake up to the reality of ‘junk sleep’. In this second series of films for Mattress Firm’s ‘Junk Sleep’ campaign, directed by MJZ’s Steve Ayson, the sleepless roam the streets like fatigued zombies and exist in a nightmarish cycle of a poor night’s sleep and the subsequent toll it takes on their lives during their waking hours.

Droga5, as well as the agency’s production partners on this project: MJZ, Exile, Parliament, King Lear, Found Objects and Company3, created several fever dreamlands for the spots - including the sleepless, surreal purgatory of a Vegas-inspired, always-open casino that is filled with sleep distractors such as social media notifications, work deadlines and the allure of binge-worthy TV. The other films take on other symptoms of junk sleep, albeit in an exaggerated and comical way, with triplets who forget they are triplets and a baseball player with a 200-hour delayed reaction time.

Speaking with LBB’s Ben Conway, Droga5’s group creative director sibling duo ‘McQueen’ (George and Tom McQueen) discuss how the agency communicated America’s sleep problem in a hilarious but surreal way, how the production teams built a casino to shoot in and the challenge of developing a new strategy without Mattress Firm’s former sleep spokesperson, Liev Schreiber.

LBB> Where did the ‘Unjunk Your Sleep’ idea and slogan come from? Everyone has heard of ‘junk food’, but how did ‘Junk Sleep’ come about?

McQueen> Just like junk food is the opposite of healthy food, junk sleep is the inverse of good sleep. It was all born from the sad reality that Americans have a sleep problem. To get people to reassess their sleeping situations in general - and their mattresses specifically - we equated sleeping on the wrong bed (with our title of ‘Junk Sleep’) to junk-food eating habits. While others in the sleep and wellness space were focused on the positive impacts of getting good sleep, we chose to flip the script and focus on the frustrating and universally relatable problems that arise from a poor night's rest. It can make you tired, groggy and forgetful - often with comical consequences. Yet no one was talking about it.

LBB> How was the creative process of finding the different scenarios to use in the spots? Did you research what ‘junk sleep’ affects and go from there?

McQueen> Poor sleep and our struggles with it are such a universal truth. There are many different ways junk sleep can impact us in our daily lives - physically, mentally and even emotionally. Taking those truths and exaggerating the outcomes or situations that our junk sleep victims might find themselves in quickly led to lots of interesting and memorable executions.

We also knew we wanted to reach certain audiences - couples, people moving home and the sporting community, thanks to our recent sponsorship deals. These provided us with places in which to set our stories, and we went from there.

As for our launch film, ‘Don’t Sleep on Sleep’, we wanted to tap into a bigger truth: that people have a problem prioritising sleep. We’re connected to everything and everyone all the time. We wanted to exaggerate the problems of living in a world that’s set up for us to stay up. That’s when the Vegas-inspired casino idea came into play. It allowed us to explore the underbelly of an always-on culture and pass commentary in a provocative way. Our sleep routines have been infiltrated by bad bedtime behaviours like TV binge-watching, looming work deadlines and social-media stimulation. And our sleep suffers as a result. 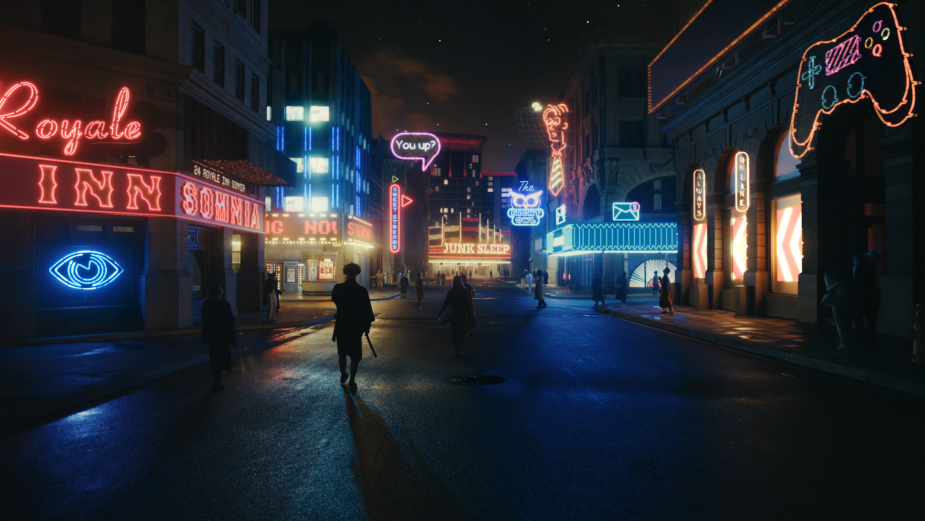 LBB> How did you create and design the immersive worlds that the spots are set in? The casino world is particularly vibrant!

McQueen> It was a labour of love for all parties involved. From the outset, we knew that world-building was important to the success of the spots. We’d stepped away from the star power of Liev Schreiber as our spokesperson, and we still needed to pack a punch.

We had the vision for the Vegas-inspired strip and the casino interior from the outset. It didn’t need to be Vegas itself, it just needed to be its own sleepless, surreal purgatory inspired by the always-on atmosphere of a place like Las Vegas. We wanted to create a commentary on all the things that people prioritise over proper sleep - the things that keep us up at night. The casino space gave us lots of visual symbols we could twist into metaphors of a culture that allows junk sleep to thrive.

When Steve Ayson came onboard, it became a real collaborative process of continuing to iterate on this idea. Little in-jokes, visual gags and even the wardrobe details on our characters continued to reinforce this idea of a sleepless existence. Playing with the visual metaphors of things that suck us away from sleep was a really fun process as we merged the glitzy yet sad symbols of a tired Vegas nightlife with today’s always-on technology. Roulette wheels that look like clocks, workaholic slot machines, dealers who dealt out social media posts—there was a lot in this theme to run with, and ultimately we turned the environment into a character itself.

Our VFX partners, Parliament, along with our production design team, led by Jason Kisvarday, were fantastic at exploring our ideas and developing all the details of the exterior street, neon signage and casino interior. It was such a joint process of defining each shot. The exterior shots of the strip were practically rigged and lit to time on and off with director of photography Jeff Cronenweth doing such a delicate job to make sure it would all come together in post. Building a whole casino floor out of nothing is no small feat.

LBB> The baseball reflexes spot is a personal favourite - which did you enjoy creating the most and were there any fun ideas that had to be left on the drawing board?

McQueen> Triplets was a favourite for us - take after take of a grown man screaming at the top of his lungs is pretty entertaining to watch. But casting for ‘Triplets’, not so much. It’s a very limited pool out there, and that’s coming from a set of twins - which also made casting callbacks particularly odd.

As always, there were a lot of ideas that ended up on the cutting room floor. Just some lovely moments, scenes and faces that didn’t have a natural home in the edit. Sleeping bodies stuck in revolving doors, a motorised La-Z-Boy navigating its way to a binge TV slot machine and just some incredible faces that only Steve can seem to find, which sadly didn’t fit in the final cut. 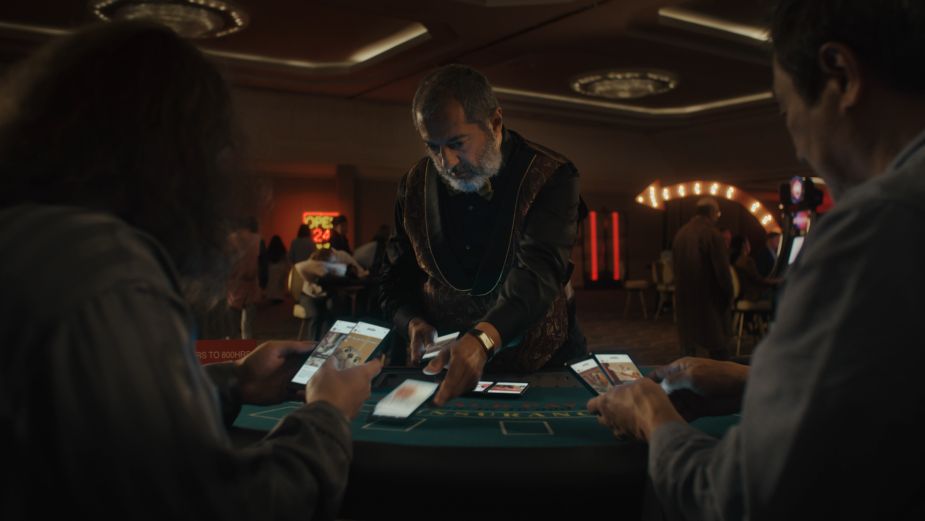 LBB> What was production like? If you were on set at all, do you have any interesting anecdotes or lessons learned from that process?

McQueen> Shooting inside an actual casino creates a headache of permitting and logistical issues. (Hint hint: they never close). So, alongside Steve and production company MJZ, we had to find a space that felt true to the feeling of a tired casino floor, then go about building, propping and lighting it to cheat reality.

It’s worth mentioning the exterior scenes that Jeff Cronenweth masterfully lit. The team at Parliament sprinkling their VFX magic on top of them was crucial to establishing the world from the start. It was a real moth-to-a-flame scenario, with the casino as the flame that had a procession of the unslept marching toward it.

Beyond these more logistical and creative challenges, we were juggling a mix of long day and night shoots with quite a lot to capture. So staying ahead of the next day as we were shooting the last took ongoing effort from our producers.

LBB> The campaign has a great sense of humour running throughout - why was this the direction you took? How did it affect other aspects of the creation - i.e, the director/editor you chose etc?

McQueen> When we’re talking about the pitfalls of bad sleep and the potential outcomes it can have on a person’s life, humour creates a richer creative space to play in. Bad sleep can be a literal nightmare, so adding levity to that is a good way to disarm people. We could then use our narrator to observe and analyse these junk sleepers with the same wit, sarcasm and dark humour we’d established in the past.

Based on the above, Steve Ayson was a natural choice for director. He helmed the first ‘Junk Sleep’ campaign, so he understood the idea and tone we needed to strike better than anyone. Beyond that, Steve is someone who is always additive in his approach. The craft, the ideas he continuously brings and his amazing eye for casting and performance - he’s just naturally collaborative and inspiring to work with, which made the whole process that much better.

Steve had worked with editor Grant Surmi before, so we were happy to continue that partnership. Grant has great instincts in the way he edits; the launch spot in particular was almost a character study in this world of Junk Sleep. Grant’s ability to exercise restraint made the work better in terms of finding the right sequences to stitch together for our story. Sometimes in comedy, the natural inclination can be to squeeze every joke you shoot into the final edit. But Grant knows that sometimes less is more. Plus, he’s lightning fast. What a dream!

LBB> What was the hardest challenge you faced on this campaign and how did you overcome it?

McQueen> The first two ‘Junk Sleep’ campaigns introduced the idea through recovering junk sleeper, Liev Schreiber. This year, we were tasked with moving beyond Liev - finding both a new voice and a new way to express our collective complacency regarding Junk Sleep. In Liev’s absence, we chose to lean harder into world-building via storytelling while also adopting a voiceover-led approach that would give us more freedom. We still embodied the same all-knowing tone and authority we’d previously established, but we freed ourselves up to examine the plight of our junk sleep victims without having to pay visual service to a spokesperson.

McQueen> Just a huge thank you to all the partners that worked on bringing this one to life. MJZ, Exile, Parliament, King Lear, Found Objects, Company3 and, of course, the incredibly dedicated team at Droga5 and our wonderful partners at Mattress Firm. Thank you for championing the work and being so open to having a laugh while doing it. Good night.