Adland Turns Gangland for the Return of the Annual Soup Off 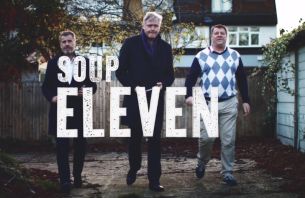 For the past ten years running, a bunch of CHI&Partners creatives and other adland folk have informally met in the Newman Arms in Rathbone Street on the first Monday in December for a ‘Soup Off’. Yes, a competition on who can make the best homemade soup judged by David Moore from Charlotte Street’s Michelin Starred Pied a Terre, and BBC’s celebrity chef Jo Pratt and other foodie adland folk. Participants have included CHI’s Micky Tudor and Yan Elliott, RBR's Dickie Megson, M&C's Justin Tindall, BBH’s Ewan Paterson and even the brilliant Charles Inge. Each entrant would pay an entrance fee of £20 and the brewery would donate a barrel of beer, the proceeds of which would go to the charity chosen by the winner. Over £6k has been raised to date.

With the Newman Arms closing last year, sadly so did the ‘Soup Off’.

But now it’s back, it’s moved East along with many other creatives, to The Sutton Arms in Clerkenwell with the above mentioned team as well as Anomaly’s Nicky Russell, BBH’s Tom Skinner, 1stAveMachine's Isabella Parish, Ogilvy’s Sasha Orr, Mad Ruffian’s Amanda Jones and other adlanders.

Check out the trailer for this year's Soup Off below.

Macy's Introduces Tiptoe the Reindeer in Adorably Nostalgic Holiday Film
Now That’s What We Call a Christmas (Ad) No 1
Müller Teams Up with Declan Rice to Go Full On with 'Rice, Rice Baby”
Work of the Week: 25/11/22