A New Year’s Resolution Worth Keeping 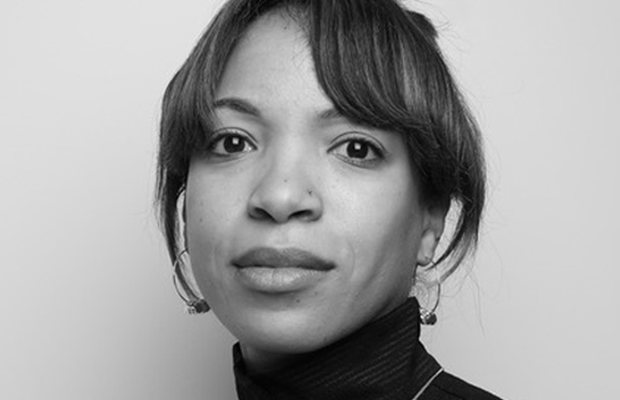 I love the start of a new year. Always full of promise. Optimism. Commitment to do things differently, and make things better. The magic of the festive break washing away your inner doubt. Then January lasts forever and that optimistic shine muddies a touch. Hopefully this will give you a smidge of hope again.
For me, amongst other resolutions for 2020 – drink less, exercise more, make time to focus on my mental health; is a commitment to being better to the world. In the words of Greta Thunberg “No one is too small to make a difference.”.
At the D&AD Festival in May 2019 during a panel discussing ‘The Goodlife 2.0” the panel encouraged brands to ‘promote aspirational and sustainable living’. In a world where Climate Change was discussed less than Brexit, cake, cats, picnics and Shakespeare on TV, according to a report from BAFTA, albert and Deloitte , what were we doing to change that?
The  panel ended posing a question to the audience to take action. Something I may have taken a bit too literally… what could you/ I/ we change to make an impact? Crikey. Here’s 5 tips that helped me and may help you…

1. Find something YOU can change

Focusing on one key thing to start helps get you going. Thinking of my influence, my impact, my role, I thought of what change I could help start. Working in such a collaborative business as giffgaff, having to think selfishly to start was counterintuitive, but valuable.
I ‘do’/ ‘look after’ advertising, I wrote up a quick list of things I could help change – how we advertise and what we advertise.
After writing up a quick list of actions we could take, the most compelling was the most obvious… giffgaff’s a mobile network, we sell phones, according to a study from The World Economic Forum, 50 million tonnes of e-waste - discarded electronic waste equipment is produced Globally every year (the equivalent of 4,500 Eiffel Towers). With only 20% of that being recycled, the remaining 80% going to landfill, so the amount of e-waste was forecast to more than double 120 million tonnes by 2050.
Something I do professionally, and personally as a consumer was making the world worse. Eek. So, to help me sleep at night again, what could I/ we do about that?

2. Don’t be afraid to combine the emotional with the commercial

In my mind previously ‘doing good for the world’ would have involved altruism. It felt dirty to combine a commercial objective with a purpose driven one. But why?
When Chilli’s developed their beautifully designed bottles were they thinking ‘let’s not make money from this trend’. Doubtful (I just spent £67 on two water bottles… which I’m only just at peace with).
The great thing with thinking commercially is it can deliver for the bottom line of your business, so is more likely to get noticed, or get buy in.
I was lucky, the commercial opportunity found me…  a trend had been identified in the market surrounding the growth of searches for refurbished phones. Further research showed that a key driver of the sector was the fact they were cheaper than new ones.
I’m not going to lie (and I feel bad saying this), but the opportunity felt dry initially… ‘buy something because it’s cheaper’, that’s cool. But not necessarily sustainable. What is more sustainable is thinking of sustainability… refurbished phones by nature are phones that have been refurbished back to life… a more sustainable option to buying new, reusing what may have been e-waste and instead refurbishing it for someone else.
We had a rational and more emotional angle. And the great thing was whatever your route in saving money or being more sustainable, it was a ‘good’ choice. Things were getting interesting.

Commercial opportunity identified, next creative and media. In our case we already had media booked in July, so we just needed to prove how this could come to life and make a difference.
In the space of 1-month we had met giffgaff members (customers) who’d ‘chosen refurbished’, had a photoshoot and featured them in outdoor advertising, thanks to super work from our team internally collaborating across business intelligence, commerce, product and creative via Made by Blah and media via Havas.
By July “choose refurbished” launched across outdoor, social, digital and our website. And the results were amazing, in month 1 we sold more refurbished phones than new phones for the first time.
We were on to something. 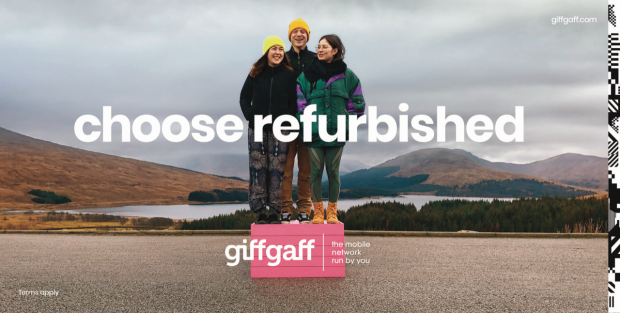 Now I’m a realist (plus I spend lots of time with our Legal team to keep me honest)… our stance on refurbished phones was far from making a significant dent in the 50 million tonnes of e-waste produced annually; but it’s a start.
Once you engage on your ‘thing’, you’ll start to become more aware of everything surrounding it…  In August The Royal Society of Chemistry, conducted a survey where they estimated that 40 million gadgets were languishing in our homes in the UK. With 45% of folks they surveyed claiming to have two to five unused devices at home.  And 82% of folks had no plans to recycle or reuse them. 82%.
The Royal Society of Chemistry highlighted that devices like smartphones contain upwards of 30 naturally occurring elements, mined from the earth and not replaceable, it changes your point of view on things.
Heading into Black Friday, a big moment in the phones calendar the challenge was how do we give folks what they want: discounts;, but get them to reconsider what they purchase.
Enter ‘The giffgaff Black Friday Pop-up Store’ a place where folks would pay with a pledge to choose refurbished and could receive a refurb phone for free. An idea that started as a media- focused idea from Havas, and became a PR generating story, executed by MC&T, collaborating with Made by Blah and our own in housein-house team.
If we could start to disrupt folks on their purchase journey, and bring in an alternative point of view, maybe it would encourage them to reconsider their choices. 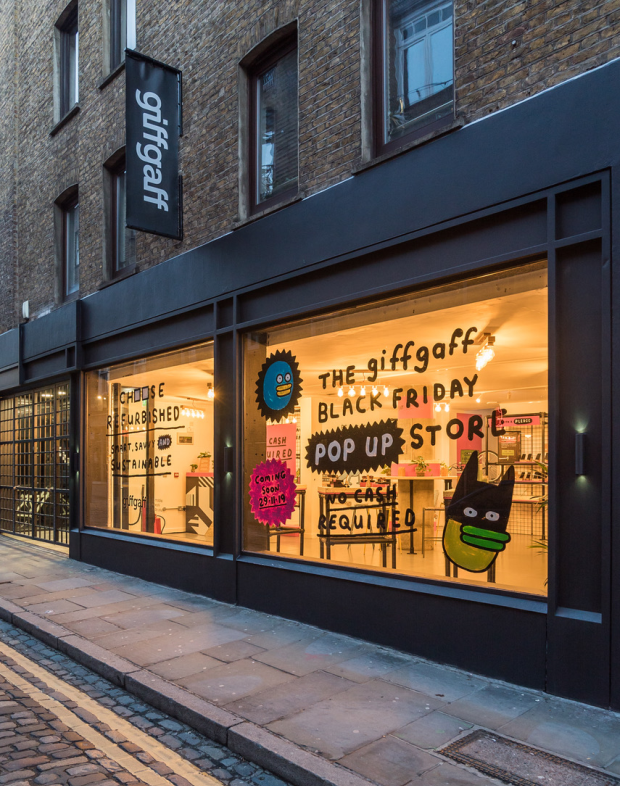 Whilst we were seeing growth in sales of refurbished phones, we still had to listen to member feedback and other insight. Quality, or a fear of lack of quality was still a barrier to convert folks.
Having bought a giffgaff refurbished phone myself, I knew once we had the product in people’s hands they’d feel more reassured. But how can you do that as an online business?
Going back to point 1, and thinking about what I can do personally, I ‘do’ advertising. I influence how we ‘do’ our advertising.
During a creative pitch for our Sponsorship creative for The Voice UK, being run by our wonderful Brand Advertising and Social Media Managers, Rayelle Al Mashgari and Lisa Boyles; they saw a concept that got us excited. The concept from the team at Made by Blah featured folks sharing their voice on the show and giffgaff.
Their proof-of-concept was filmed on a phone, incidentally a refurbished phone. So that sparked the thought, why don’t we make sure we shoot all of our creative for the year ahead on giffgaff refurbished phones.
Making the product a core part of what we make, and how we make it, not just something we sell. So. we shot all of our TV Sponsorship idents, TV ads, Outdoor and Social content all on refurbished phones.
We’re as committed to “choose refurbished” as we’re asking consumers to be.
[IMAGE REF ‘’choose refurbished’ 2020’; “giffgaff gives you The Voice” sponsorship ident credit Made by Blah x giffgaff in house]
This is the beginning of our journey, but it’s been a promising start, so I hope it inspires you on yours (or at the very least peps up your JanuaryFebruary).
Thanks for reading, get in touch if you have any questions, or want to talk more.
Abi

giffgaff Flips the Script on Horror Clichés in 2019 Halloween Campaign

giffgaff Takes on Brexit and Boredom in 2019 Brand Campaign #Choosegiffgaff