A ‘New Global Protest Method’: Grenfell, Three Billboards, and the Power of a Smart Media Strategy 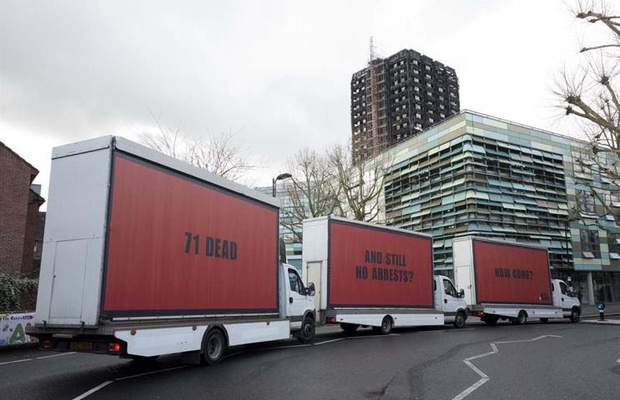 ‘71 DEAD, AND STILL NO ARRESTS? HOW COME?’
That was the striking message that confronted Londoners when three billboards paraded through central London this February.
Now, three months later, the highly visible stunt - designed to protest the lack of progress being made in the wake of the Grenfell Tower tragedy - has resulted in a staggering 140 global news stories, 6.5 billion impressions, and the equivalent media value of £91 million.
The momentous success comes as a result of a great media strategy aligned with a brilliant creative idea. The much-talked about stunt was created for community-led organisation, Justice4Grenfell, by BBH Labs and took inspiration from one of this year’s most prominent films, Three Billboards Outside Ebbing, Missouri.
So far, the 150,000 plus signatures for a petition calling for a more diverse Grenfell panel have secured a Parliamentary debate on the issue. It was even deemed a ‘new global protest method’ by The Guardian and moved Frances McDormand (who played the central character in Three Billboards) to highlight the movement at the Oscars, saying: ‘Billboards still work’.
“The Three Billboards for Grenfell campaign encapsulates everything that a brilliant creative idea coupled with a smart media strategy can achieve,” comments Kevin Brown, Partner at Electric Glue. “At Electric Glue, we’ve always championed how a different kind of media approach can propel great creative and this is a prime example of its power.”
Kevin outlines the key components behind the project’s success via its media approach:
1. Inventive solutions
2. Location
3. Timing
“When BBH Labs came to us with this incredible concept, we knew we had something special. The initial challenge was how to replicate the billboards from the film. Installing actual billboards outside of Parliament would have required approval from the council – a tricky and time-consuming process. Instead, we opted for an inventive solution: three roving ad vans,” continues Kevin.
Not only was this alternative strategy more practical and reactive than the original idea, it actually expanded the stunt’s reach further:
“The mobility of the ad vans meant they could be driven from Parliament, through key locations in central London, finishing its course at the Grenfell site. As a result, it made an impression on far more people, generating greater engagement.”
Timing was also a crucial factor. The 14th of February was a meaningful date for several reasons. Firstly, it was exactly eight months after the Grenfell tower fire, emphasising the lack of progress and accountability that the campaign was highlighting. Secondly, the team struck at a time when the public buzz around Three Billboards was at a high; shortly before the stunt, the film had picked up four wins at the Golden Globes and it was hotly tipped to triumph at the BAFTAS, which was taking place a few days after our stunt. PR agency, Mc&T, propelled the stunt even further with their smart amplification strategy.
“Tapping into the cultural zeitgeist helped make this so accessible and instantly impactful to a broad audience,” comments Kevin. “This year, we’ve noticed an uptake in advertisers exploring more daring and innovative OOH strategies. I think it’s a trend that we can expect to grow as the demand increases to stand out amidst the saturated advertising media landscape”.