McDonald’s scoops Grand Prix and £100,000 worth of media space 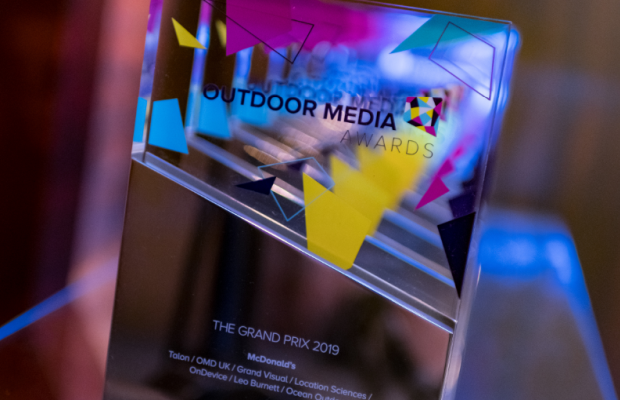 The winners of the 2019 Outdoor Media Awards were revealed last night at the St Pancras Renaissance Hotel to an audience of the industry’s best and brightest.
McDonald’s took home five awards: The Multiple Format, Creativity, Data & Insight and Peoples Favourite Awards, as well as sealing the Grand Prix and winning £100,000 worth of free media space.
In a first for the awards, the Grand Prix was awarded to McDonald’s not for a single campaign, but for the combined efforts and commitment to Out of Home, that captured the hearts of the judges and public alike.
Slough Borough Council won the first ever Social Impact Award for their 'Modern Slavery Is Closer Than You Think' campaign. The local authority won the new category, created to celebrate an Out of Home campaign that’s made a positive social impact, for their campaign to raise awareness of and encourage people to report instances of modern slavery.
Huawei sealed The Brand Fame Award for their high-impact, multi-format '2018 OOH' campaign, around the launch of two new devices.
Hiscox’s 'Cyber Live' won The Innovation Award for their cutting-edge campaign that highlighted the need for Cyber Insurance for small businesses.
loop.gl were handed the The SME Award for “London Loop Urban Gallery”, an interactive  campaign to raise awareness and allow creatives to showcase their work.
Mike English was crowned Rising Star for 2019 for his above-and-beyond efforts as part of the Goodstuff’s Out of Home team.
For more details on the winning entries, take a look at the winners’ booklet here.
With a record number of entries for this year’s awards, all the judges were blown away by the standard of submissions. Chris Pelekanou, chief customer officer at Clear Channel and Outdoor Media Awards judge, said: “All of this year’s winners and shortlisted entries have played a substantial part in driving forward Out of Home, whether it’s a combined large scale efforts of McDonald’s, or the localised push for change by Slough Borough Council. I’m exceptionally proud to be part of this industry, and I’m sure all of the winners will too.”
The awards, run by Clear Channel UK in partnership with Campaign magazine, are now in their 13th year, rewarding excellence in Out of Home advertising and celebrating the strategic and innovative campaigns from the past year, as well as the brilliant people involved in creating them.