How many bites has your favorite series taken from your mouth?Embed With Credits

Uber Eats and its agency Circus launch the regional campaign

"The series that took more food out of your mouth".

Mexico City, April 15, 2019.- As of this Sunday we already begin to taste the final season of one of the series that has generated more social conversation in recent times. With this motive Uber Eats and its agency Circus created a fun and timely campaign showing how we have lost delicious bites to be left open-mouthed by unexpected deaths, unpredictable weddings and epic battles.

"We wanted to be part of one of the biggest phenomena of entertainment and social networks taking advantage of the great moment of consumption that this means for Uber Eats. It's a fun campaign where we show the emotions caused and in which food and users are the main characters." said Antonio Marchese Director of Brand Marketing at Uber Eats for Latin America.

"We know it's a great time to stay at home and share with friends and family, food in between, and that's why we created a campaign for Uber Eats to allow everyone enjoy this experience more, which we are sure will be something that won’t happen again, "said Ignacio Liaudat, CEO of Circus.

The campaign "The series that took more food out of your mouth" consists of 19 pieces, which will be released during the 7 weeks of the campaign and which will live on the brand's social platforms during this period. The campaign will be aired in 14 countries in Latin America. In parallel, Uber Eats, in partnership with hundreds of restaurants, will offer special promotions.

"Uber Eats is a brand that has the potential to become part of the digital culture because of the number of conversations it can be present in and we are working towards that," said Dauquen Chabeldin, Head of Creative at Circus.

Circus is a multicultural and integrated agency that partners with its clients to develop effective communication with high-impact data-driven creativity. Founded in 2005, today it has operations in 7 countries and more than 250 employees. Among its clients are: Netflix, Spotify, Uber, WeWork, eBay, Twitter, Google, Warner, Lala and Saba.

Uber Eats is an application and website that allows millions of people around the world to request the food they want for home delivery at the touch of a button. By partnering with more than 200,000 restaurants in more than 350 cities in 35 countries, Uber Eats allows them to offer meals for all tastes and occasions. From favorite local specialties to the big chains, Uber Eats allows millions of dishes to be offered, delivered reliably and quickly, in about 31 minutes *. 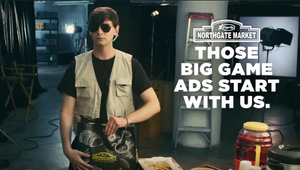 Saba and Circus Continue to Transform the Perception About Female Care

Those big game ads start with us

How many bites has your favorite series taken from your mouth?
View all Work