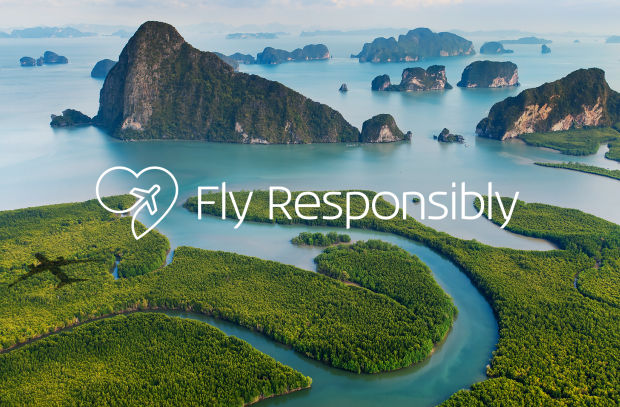 Thanks to the growing number of uncompromising figures like Swedish climate activist Greta Thunberg, patiently standing up in the face of Earth’s climate emergency, we now live in a world where people talk of concepts like flygskam. Following hygge and lagom as one of the latest Scandinavian lifestyle crazes, the word translates as ‘flight shame’ and has a neat opposite - tagskryt, or ‘train brag’. As the world continues to hurtle towards inhabitability, the aviation industry is responsible for two to three percent of global man-made CO2 emissions. For an airline, that’s not a good look.
That’s why last weekend KLM Royal Dutch Airlines published an open letter in leading international newspapers including the New York Times, the Guardian and the Frankfurter Allgemeine Zeitung. In it, the company is urging everyone to join in its ‘Fly Responsibly’ effort. This includes asking corporations and individuals to make responsible travel decisions, even inviting them to fly less often if they can, say, grab that chance for a tagskryt instead.
A social video underpins the initiative. In it the airline expresses its commitment to achieving maximum progress and prompts travellers to reconsider their options before taking a plane.
KLM is keen to show that it’s trying to lead the way towards a more responsible aviation industry. It has invested in the first sustainable fuel plant in Europe and has committed to sharing its sustainability knowledge – such as optimal flight insights –  best practices and tools with its competitors. It will also offer competing airlines its CO2 compensation programme ‘CO2ZERO’ free of charge and free of KLM branding.
The broad initiative was conceived and created by KLM’s long-time creative partner, DDB Unlimited. LBB’s Alex Reeves spoke to the agency’s managing director Esther te Pas as well as KLM’s head of global marketing communication Natascha van Roode.
LBB> It’s quite a bold mission you’ve set yourselves! How do you as KLM hope to cooperate with other airlines to tackle the environmental impact of flying?
Natascha> Sustainable development in aviation is not a ‘one-airline-topic’ and actual progress will only be made when we work together as an industry.
That’s why we’ve launched the ‘Fly Responsibly’ initiative. Fly Responsibly is KLM’s commitment to taking responsibility for its own role in creating a more sustainable future for aviation. It includes all of the work we already do and will do in the future, to improve the sustainability of our operations. But it also includes sharing what we do well with others, while learning from what they do well. Only when we work together across the entire industry can we make real progress. So, with Fly Responsibly, we invite consumers to carefully consider their options before booking a flight. We invite companies to offset corporate travel through a corporate biofuel programme. And we open source our best practices for other airlines to use.
In addition, we plan on organising events, roundtables and panel discussions to surface the best ideas from bright minds within our industry working on this issue.
In the first week of September we will kick off with the first quarterly webinar in which we will share our sustainability best practices. Together with our partner SkyNRG we will discuss the topic of sustainable fuel in this inaugural webinar.
Later in September we will host a dialogue session (in Dutch) on sustainability, during the KLM Open event.
LBB> Technologically, what do you see as the changes the aviation industry needs to make to minimise its impact on the climate? How can it become a completely sustainable industry?
Natascha> To become fully sustainable requires technological innovations. But in the meantime there are a lot of actions we can take to substantially reduce our CO2 footprint. Currently, a very impactful change on behalf of the environment is using sustainable fuel. In 2009 we started with the development of sustainable fuel, in 2011 we did the first commercial flight on biofuel, and in 2012 we launched the corporate biofuel programme for corporations. Today we use 57 times more sustainable fuel than we used in 2011. However, the production of sustainable fuel is still far below what is needed.
Sustainable aviation fuel is a necessary short-term option that the commercial aviation industry has to reduce CO2 emissions in the short term, in addition to fleet renewal and operational efficiency gains. However, not enough sustainable kerosene is currently being produced.
Earlier this year, we committed for a 10-year period to the development and purchase of 75,000 tonnes of sustainable aviation fuel a year by investing in the first sustainable plant fuel in Europe. This made us the first airline in the world to invest in sustainable aviation fuel on this scale.
KLM’s CO2 compensation service CO2ZERO enables our passengers to compensate for their share of the CO2 emitted during their flight. We started CO2ZERO in 2008. The last two years we’ve experienced a doubling of the number of passengers that compensated their flight. Now we invite others to use our CO2ZERO programme for carbon compensation free of charge and free of branding, and partner in our corporate biofuel programme. 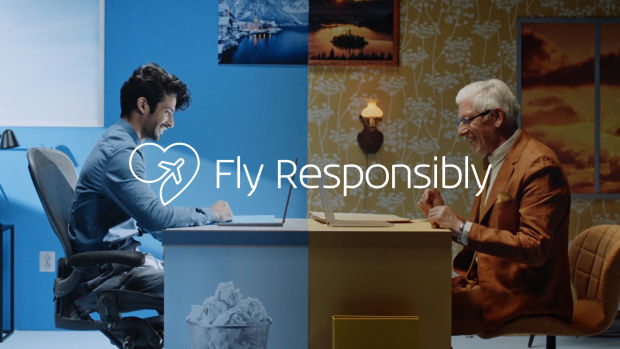 LBB> Esther, where did this idea begin between DDB Unlimited and KLM?
Esther> KLM is the first airline to celebrate 100 years in operation. KLM is also widely recognised as a pioneer in the aviation industry. In their centennial year, they not only look back in celebration, they look forward to a more sustainable future. When they started 100 years ago, their primary concern was safety. Over the years, the aviation industry has worked together to implement safety standards and improve overall safety. Now, they acknowledge they have another big responsibility: to leave a world for our children to explore. To that end, they propose that as an industry, they come together like they did on safety, and overcome this challenge as well.
LBB> What were those early conversations like? It's a scary thing for a brand to tell its customers to stop using its services as often!
Esther> KLM has always stepped forward when it comes to sustainability. And as KLM has been at the top of the Dow Jones sustainability index for the last 14 years – the brand is used to discussing the topic and knows that environmental challenges need to be addressed.
We all fly and will not stop flying, but we need to think about it in a responsible way.
LBB> How did that develop into the overall strategy? It's an integrated campaign with several different moving parts. What do each of them hope to achieve?
Esther> Sustainability is one of the pillars in the KLM 100 strategy. So it is not a campaign but a new initiative. The open letter from Pieter Elbers, KLM’s CEO, kicked the initiative off in a bold way. This was a way to invite all parties in the aviation industry to join forces and take action.
The video and online articles are there to show and tell more about the actual environmental issues we’re facing. The online platform/website is the backbone of the communication around Fly Responsibly, where every part comes together and where we show what we do, what you can do as a traveller and what the industry partners can do. 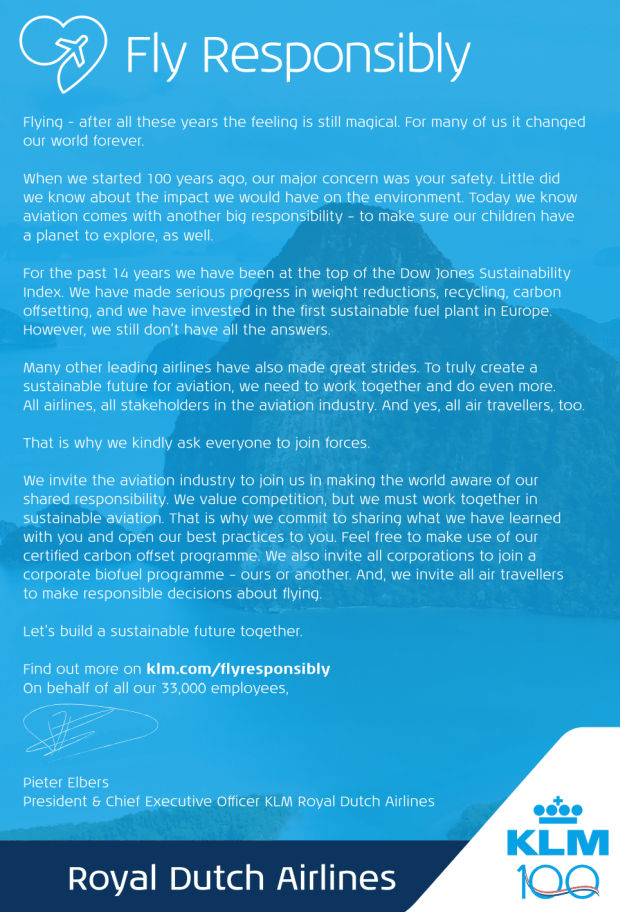 LBB> The line 'Fly Responsibly' reminds me of parallels with alcohol advertising. But it’s different because that messaging is forced on the industry by regulation. How was that a consideration in creating this idea?
Esther> Indeed, we thought of that parallel too - of course. The ‘Fly Responsibly’ line is such a clear, short and strong message that we immediately became fans of it – and felt this could become big. And it would be a great achievement if we activate a movement with it that sets the new industry standard when talking about sustainable aviation.
LBB> Has KLM had any interaction with Greta Thunberg, Extinction Rebellion and other prominent people in the sustainability conversation? How can this idea be enough for people campaigning for radical change in the face of the climate emergency?
Esther> As far as we are aware KLM has not had interaction with activist parties. We are of course aware that there’s a movement saying that the only solution is to stop flying.
But KLM is a business - and they want to stay in business. For their customers and their 33,000 employees. That’s why they are stepping forward to speed up progress towards a sustainable future for aviation.
Taking alternative modes of transport instead of flying can be more energy-efficient. However, for long distances, there is in most cases no real alternative yet.
view more - Brand Insight