Why FCB Brasil and Raça Are Saying ‘The Future Is Black’

After 25 years as the foremost, and original, publication dedicated to Afro-Brazilian culture, Raça Magazine enlisted the help of creative agency FCB Brasil and photographer Roger Monteiro to produce a series of posters and artwork for 12 monthly issues to celebrate the milestone.

Featuring a variety of bold portraits, posters and other artwork, 'The Future Is Black' is a campaign that utilises strong Afro-centrist imagery, such as the colours of the Pan-African flag as well as traditional ‘Adinkra’ imagery from the Ghanaian Ashante region - a place which many descendants of Brazilian slaves returned to following its emancipation from British colonialism in the ‘50s.

As well as using the art as ads for the magazine, for each monthly issue of Raça for a year, FCB Brasil has created artwork that relates to the topic of each edition, making this a dynamic campaign that evolves with the magazine’s conversations and editorial focuses. Whilst reacting to the topics of the moment, the campaign is still very much rooted in Afrofuturism – a cultural, aesthetic, and political movement from a Black perspective that manifests itself in all manners of art. By celebrating Black Brazilians’ identity and history – and by depicting a future of overcoming racial oppression – the campaign aims to protagonise Black people in the discourse and media space of the nation. 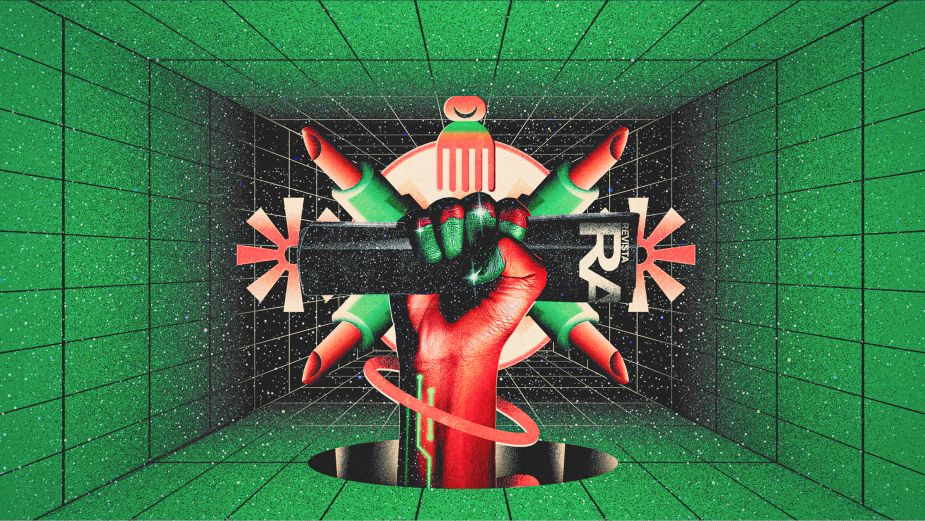 LBB> How did this project come about? Has FCB Brasil worked with Raça before?

FCB Brasil> Raça is one of the first and the longest-standing publications about Afro-Brazilian culture. The project came from the need and the desire to celebrate the magazine's 25th anniversary and everything that it represents in the fight for the Black community to occupy more space in public opinion in Brazil. This project is part of an FCB Brasil communication plan developed jointly with Raça, and also includes the Black Characters platform – an affirmation initiative that helps the Black community occupy spaces in society.

LBB> What was your initial reaction to the theme of ‘Afrofuturism’? What does this term mean to you, and what creative ideas immediately came to mind?

FCB Brasil> Afrofuturism is a movement that began to gain popularity in the ‘90s that aims to bring together an Afro-centric perspective with cosmology and science fiction, by inventing different futures for the Black population. The term was coined by Mark Dery in 1993 and was made popular by Alondra Nelson. It portrays a developing present and imagines a grandiose future, claiming, securing, and empowering the true place of Black people in the world; in the avant-garde, with agendas, stories, ideas and creations that are ahead of their time.

And Raça Magazine has been doing that for 25 years. It has been dealing with topics that only now are being included in the editorials of the largest magazines in the country. As an example, in 1996 the magazine was discussing makeup for Black skin, something that only recently found its way to the pages of the other magazines. Raça has always had a vision for the future. And from this perfect symbiosis between Afrofuturism and Raça Magazine came this beautiful 25th-anniversary campaign. 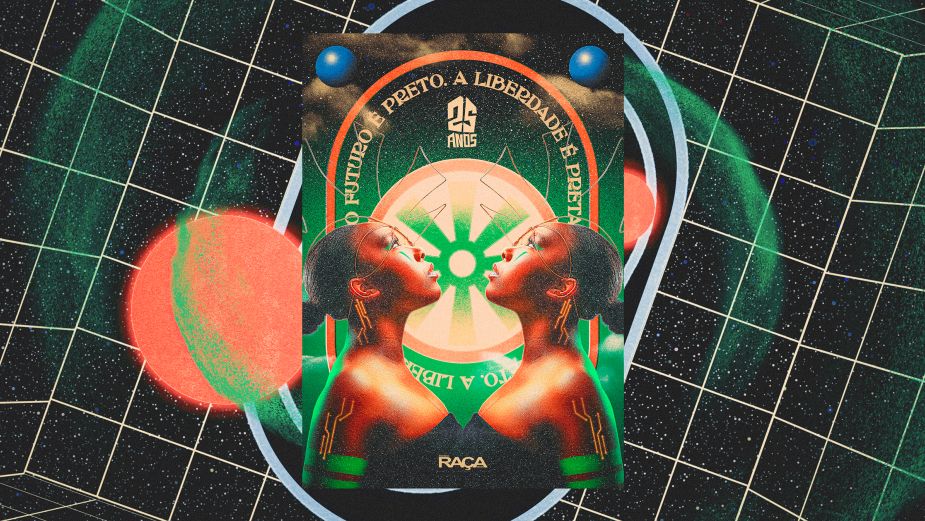 LBB> How was the experience of working with the photographer, Roger Monteiro?

FCB Brasil> Roger Monteiro, in addition to being a long-term partner of Raça Magazine, has always provided a unique and careful perspective in this editorial universe. Roger and his team actively collaborated with the development of each character we created, helping give them this aura that connects the character on the cover with the mysticism of Afrofuturism. This is all present in the makeup, the accessories, and in the photographic style, allowing us to include, in the final stage, the illustrations and symbols that needed to accompany the image.

LBB> The posters in each monthly edition of Raça “address the cover stories” of each issue. How did you cooperate with the magazine to create this component that follows the topics in each issue?

FCB Brasil> It's about protagonism. When we put someone on a magazine cover, this has a very strong impact. And because it's so impactful, the whole campaign was conceived using this language. And alongside the magazine's editors, who gave us insights into future issues, we collectively defined the topics we would broach on each new issue. 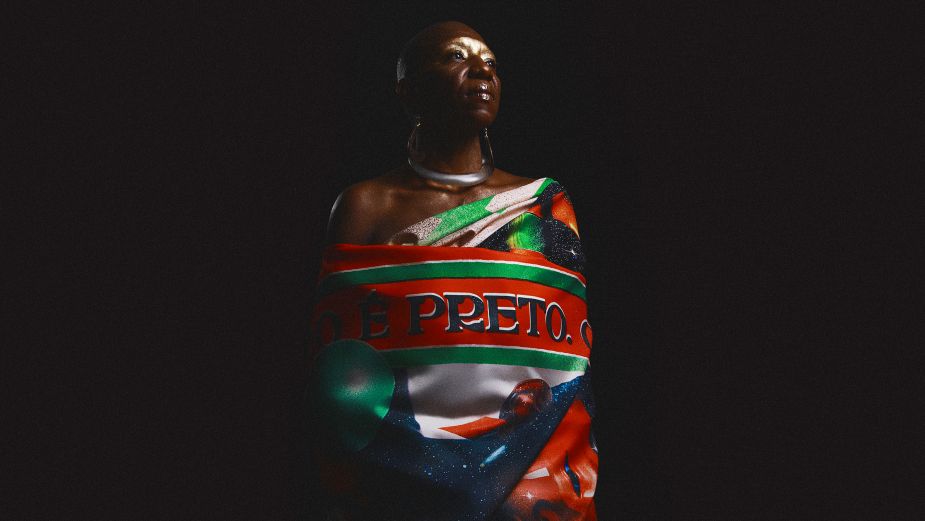 LBB> Can you explain what ‘Ananse Ntontan’ and ‘Sankofa’ are? How and why are these symbols used in the campaign?

FCB Brasil> Brazil is the Blackest country outside Africa. To us, it made perfect sense to use symbols referring to a past before the pain, before Black people were abducted from Africa; symbols that would pay tribute to people who had been there before.

Ananse Ntontan and Sankofa are Adinkra symbols that represent the philosophy of the Ashantes – an important ethnic group in Ghana, the first African country to gain its independence, and to where descendants of Brazilian slaves returned. Ananse Ntontan represents knowledge, creativity, and life's complexity. Sankofa is a bird that has its feet firmly on the ground and its head looking backwards. The egg symbolizes the past, showing that the bird flies into the future without forgetting the past.

LBB> How did you incorporate the Pan-African flag’s colours – what other design choices can you highlight?

FCB Brasil> The campaign's design is loaded with symbolism and was meticulously conceived and studied by a diverse team of FCB designers who kept in mind that, like the graphical symbols, the colours also needed to have a conceptual role. The colours were inspired by the Pan-African flag, in which green, black and red comprise the symbol of the political and philosophical movement of the 19th century; it aimed to bring together the peoples of the African continent and diaspora to fight against the narrative of so much suffering and need – imposed by colonialism. The desire to build new discourses and paradigms around the existence of Black people also represents the work of Raça Magazine. 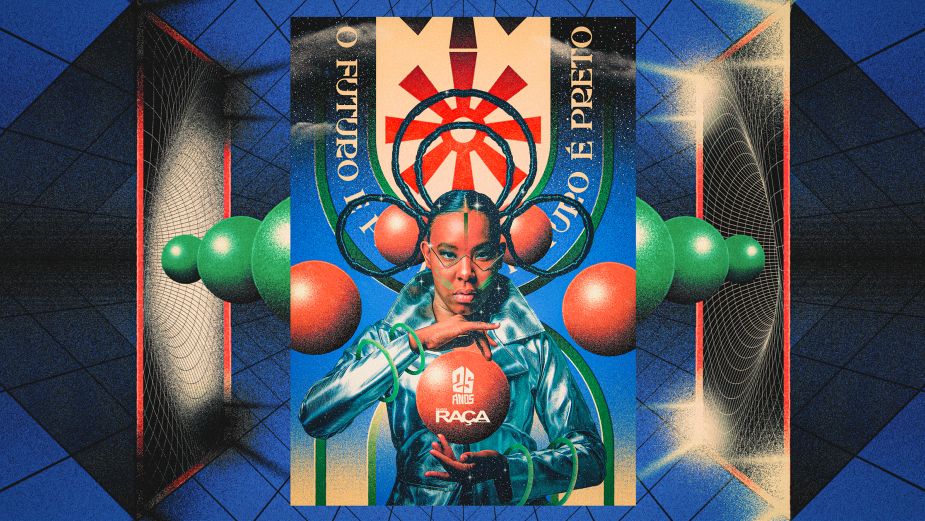 LBB> How was the campaign designed to fit in with the style and audience of the magazine? And how does it celebrate the magazine’s 25-year anniversary?

FCB Brasil> In Brazil, 54% of the population is Black. In other words, celebrating black culture, which Raça Magazine has been doing for 25 years, also means celebrating the culture of our country. Raça started doing that when it was the first magazine in the country to feature a Black person on the cover. This magazine has been ahead of all the rest for at least 25 years. And not only on its covers, but especially in its content, which opens space to show Black protagonism everywhere, from the arts to entrepreneurship, to technology, science, etc. So we followed the magazine's editorial line, but under the conceptual layer of our campaign: Afrofuturism.

LBB> How long was the production process? Were you at any of the shoots? Do you have any anecdotes of lessons learned from that process?

FCB Brasil> The whole process, from concept to production, lasted about a year, as each piece of art had to be related to the main topic of that specific issue. This was an on-demand campaign developed gradually from September 2021 to September 2022. As the campaign progressed, we also learned that, because we were dealing with a topic that represented the centuries-old struggle of a people, we needed many exchange sessions among our team members, as well as moments for learning and understanding - part of an immersive process into history. The commitment to the agenda certainly contributed to an aesthetically pleasing result, full of meaning. 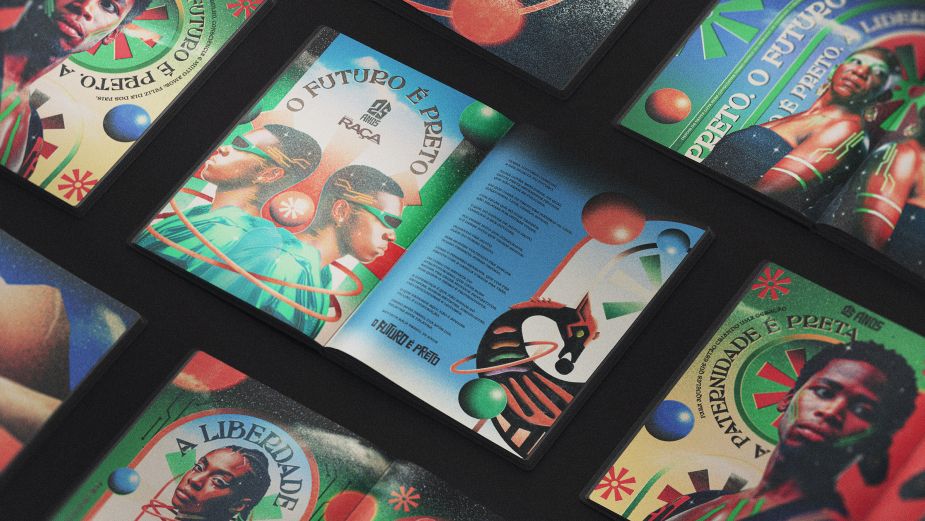 LBB> For those of us outside of Brazil, we may not be aware of the racial intricacies and history of the Brazilian people. So, could you explain why it is vital to give visibility to Brazil’s Black community and how this campaign presents a “Black future”?

FCB Brasil> Brazil was the country that received the most Black slaves, and was the last western country to abolish slavery, in 1888. At that time, Black people already outnumbered all other ethnicities in Brazil, and the white elite developed an interbreeding strategy with whitening policies in the 19th and 20th centuries, providing incentives for immigration for white Europeans and Asians, and facilitating jobs and land ownership to these groups (which was denied to Black people after the emancipation).

These policies re-forged racism into the fabric of our society, through what we call the ‘myth of racial democracy’. This gave rise to a culture underlined by the idea that we are all mixed, that we all have the same opportunities and rights in society, which is plainly not true. This myth aimed to demobilise Black people in the country, and was so effective that to this day they still struggle to self-identify as Black in a racist social structure.

Raça Magazine was founded in this Afro-centrist context of identity and belonging, and “The Future is Black" came to join this collective empowerment process for Black people, who today are building a different perspective of life - from the very bottom of the social pyramid to the occupation of spaces of power.

LBB> What was the hardest challenge you faced on this campaign - and how did you overcome it?

FCB Brasil> From the perspective of production and creative work, the campaign demanded extra agility, from both the agency and the client. Especially because we created individual assets that matched the editorial content of each issue. As soon as we received an upcoming issue's topics, we brought together the team in squads (our method of work here at FCB Brasil, which brings in different departments to work on a common idea, in an agile and horizontal way) and defined the main topics to be explored on the new assets. We had to have journalistic agility, but never lost sight of the craft and the care for details in art direction that advertising requires. The result is unique pieces that never repeat themselves and that introduce new concepts every month.