INFLUENCER: Jill Schaefer, associate research director at System1, explores the best ads to come out of the tournament 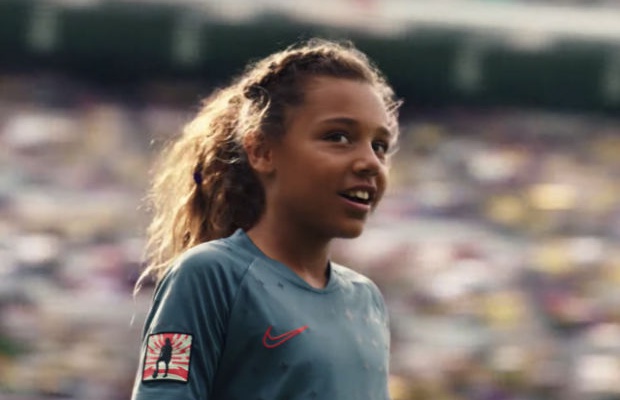 The 2019 Women’s World Cup kicked off this June, sparking discussions beyond on-the-pitch performances. Whilst the tournament has raised criticism around the slow pace of global encouragement, development and investment in women’s sports, it has also been a story of positive progress for the competition. We tested WWC ads launched in the UK and US that showed some brands have been quick to capture this spirit in their advertising with great success.
Nike, a brand known for ads that take a stand on controversial social issues, takes home the cup with their global ad 'Dream Further,' earning the top spot in the US and UK – a 4-Star ad in both markets. This ad is closely followed by their US-specific ad 'Dream with US.'  At the heart of these ads is a message for young girls to dream without limits – successfully building upon the campaign started with their 'Dream Crazier' ad (launched this February at 3.1-Stars).
WINNER: NIKE – 'Dream Further' (UK, 4.6-Stars; US, 4.2-Stars)
In 'Dream Further,' a girl nervously finds herself in the middle of the WWC action, first as a player then through a series of other WWC events, before returning to the field to assist a goal – illustrating the transformation of her nerves into confidence. Through this, the ad takes viewers on a journey that positively celebrates the energy of the competition and culminates with the tagline “Don’t change your dreams, change the world,” to solidify Nike’s support behind the WWC competition and women in sport.
FINALIST: NIKE – 'Dream with US' (US, 3.8-Stars)
Nike’s 'Dream with US' follows a similar narrative, with tennis superstar Serena Williams voicing over aspirations across different sports to encourage girls to dream without barriers. The ad concludes with the same girl from 'Dream Further' watching the USA women’s squad running onto the field echoed with cheers from a packed stadium. After this shot, the tagline from 'Dream Crazier' is resurrected – “It’s only crazy until you do it” – that creatively transitions to Nike’s iconic brand asset 'Just do it.'  This results in a final burst of brand recognition, making the ad the most Fluent of those tested in the US.
WWC ads released in the UK by Lucozade and Budweiser are also strong performers, both pairing national pride from the women’s England squad with determination and strength. However, each ad delivers the inspiring message in slightly different ways.
SEMI-FINALIST: Lucozade – 'The Lionesses' (UK, 3.7 Stars)
With an original poem anchored in England’s “Football’s coming home” chant, this ad weaves a story of women triumphing over expectations to equally deserve the Three Lions on their shirt. A blue Lucozade water bottle has a consistent presence, allowing viewers to easily connect the brand to the ad, building Fluency without sacrificing emotional resonance.
SEMI-FINALIST: Budweiser – 'Heart of a King' (UK, 3.5 Stars)
Budweiser’s 'Heart of a King' uses a speech from Queen Elizabeth I, orated by the England women’s squad to illustrate the power of the team being equal to that of a king. As with Lucozade, cues to the Budweiser brand, particularly its logo silhouette, are present throughout helping it to emerge as a recognisably Budweiser ad.
OFF TARGET: Coca-cola – 'Ball Sip' (US, 2.7 Stars)
But as with every competition, the success of one comes at the disappointment of another. For the WWC, it is advertising giant Coca-cola’s ad that falls short of expectations. Whilst the ad leverages energised scenes of the competition, its vignette presentation comes at the sacrifice of telling a meaningful story, as exhibited in the top WWC ads.
Performances across the ads indicate that the key to success is not just about relying on the inherent energy of the global sporting event, but connecting it back to the deeper, more emotionally charged topic of gender equality that has underpinned much of the dialogue surrounding this WWC. And whilst the top advertisers all approached this message differently, victory was captured by those that focused on progress – both progress made and still to be fought for – in women’s sport.
We discuss the ads further in our podcast: