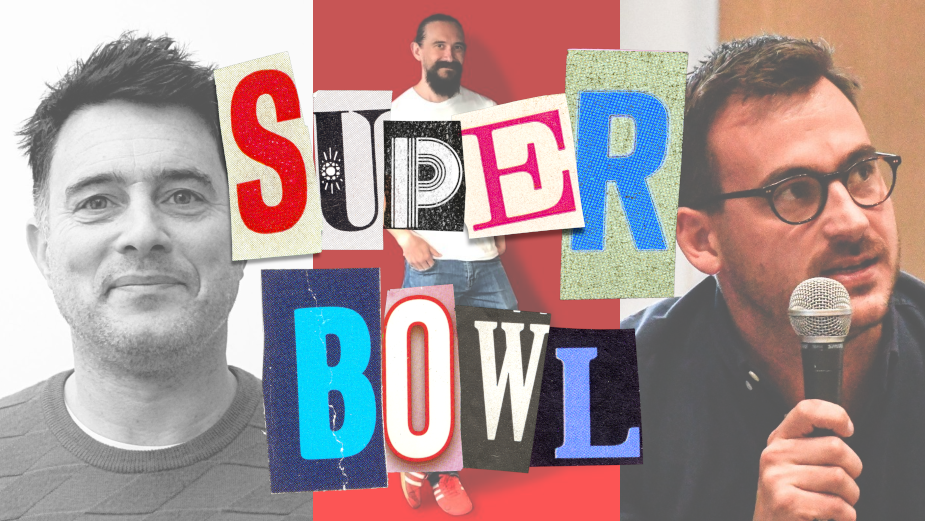 Johnny and Angus are executive creative directors at Ogilvy UK, and joint creative leads for Ogilvy's Experience capability. They’ve been a creative duo for over 15 years. They spend their days thinking and creating end to end, top to bottom, back to front and inside out. Pushing strategic and creative boundaries to create impact for Ogilvy clients in the UK and across the world. They also founded Ogilvy UK’s unconventional creative internship, The Pipe, created to bring more diversity of thought into the creative industries. Johnny and Angus both grew up by the beach, but on opposite sides of the world. A duality that defines them as a team.

Damon Collins previously worked in senior creative roles at agencies including Rainey Kelly Campbell Roalfe/Y&R, Mother, Lowe and AMV BBDO before co-founding UK-based creative agency Joint London in 2012. Joint is a happy collection of expert strategists, creatives and producers who place clients and their business at the heart of everything they do. They relish a challenge and believe relentless collaboration is our best chance of success.

Here, these three senior creatives share a list of their favourite ever Super Bowl spots and provide some insight into what they believe makes a great ‘Big Game’ ad.

The ads that stand out for me are the ones that are more than just ads. Here are just a few of my faves...

Newcastle Brown Ale - If We Made It

As a Northerner, it would be remiss of me not to mention this brilliant Newcastle Brown Ale spot. The advert is wonderfully subversive and totally on-brand. This was no passive experience - it invited everyone in to play with it and co-create the dream of the ad together. People ‘saw’ the ad in their imaginations - and the dream of it was far better than anything Newcastle could ever have made. The use of celebrities (and the participation of celebs they didn't even pay for) was also both cunning and funny.

Another example where the story of the advert was more powerful than the ad itself. The casting of the child is great -  he's as weird as Skittles - a true brand ambassador! The draw of a well-loved celebrity David Schwimmer combined with the nth degree of ultra personalisation takes this to the next level for me, and everyone wanted to see it. Exclusivity is attractive. Ultra-exclusivity is impossible to ignore. I still want to see this ad. And I hope they never ever share it with the world.

The story behind this advert is what makes it. It is a brand that really knows who it is, acting in a way that’s 100% authentic to them - disruptive - at a time when the platform itself was being disruptive in the news cycle.

The copy is sublime, and really brings the story of Reddit to life, "Powerful things happen when people rally around something they really care about. And there's a place for that. It's called Reddit." Both memorable and effective, this advert even crashed the platform itself, bringing hundreds of thousands of new users and all done at the last minute too. It’s incredible that they even pulled it off - but it plays into the reactive and always-on nature of Reddit - again reinforcing who they are and what they stand for. Authenticity, authenticity, authenticity - that's why it's not just my favourite Super Bowl spot, but one of my favourite ads of all time

Here are two of my faves...

This advert didn’t just leverage culture, it created it, as the cherry on the cake of the massively successful Eat Local campaign. Tapping into the nostalgia of the general public that people were yearning for during the pandemic, the advert provided a little warmth and familiarity in uncertain times. It was designed to be skipped and hunted through, turning passive film into an experience; genius in a time where many of us had more time on our hands.

People not only looked for restaurants they recognised, but also for the funny little secret moments - like the fake Wayne and Garth or the Alice Cooper cameo. The advert wasn't actually a Super Bowl ad, but they subverted that authentically -  with reference to "the big bowl" and "the gigantic bowl" and while the spot itself got a lot of attention, it was the 2.5 hour YouTube video that stood out  - a personal thank you to all 89,252 UberEats partner restaurants in the United States - an epic undertaking.

‘It's a Tide Ad’ is probably the more famous of Tide's Superbowl efforts. But for me, the Bradshaw Stain went far beyond the ad break and turned the whole Super Bowl into a Tide experience. It invited people in in a way no other brand had done before, or has done since, while in your face. It was subtle, and when people got it, there was a massive lightbulb moment where audiences felt good about themselves for getting the joke. They treated viewers with respect, and that's always worth celebrating.

Every Autumn, America’s actors, sportspeople and celebrities wait by the phone for The Call. The one offering them millions of dollars to appear in a TV commercial during the following February’s Super Bowl. Alongside them, also waiting hopefully, are the directors, for whom the production of this one spot could make their entire year.

Every year the Super Bowl offers without doubt the biggest moment in the world for the advertising industry. 100 million people watching 80 ads made only to appear once, with sky high production budgets and a brief to get the biggest famous name possible. What makes a great one, over and above stuff that just makes you chuckle? For me it’s about relevance. Of product and star. Products they that are well integrated into the narrative not gratuitously shoe-horned in.

Which are my favourites?

The famous Boston brewer uses a slightly different kind of ‘celebrity’ that is satisfyingly relevant to the brand. Two security guards at the Boston Dynamics campus end up sharing a few beers with a bunch of those amazing robots you see on the internet doing things that make it increasingly clear they are only a hair’s breadth from becoming our overlords.

And the winner of this year’s Best Electric Vehicle commercial of the Super Bowl (of which there were plenty) iiiiiiis… General Motors. You can’t fault GM for their commitment here. Re-uniting Mike Myers with the full Austin Powers cast and adding some nice gags, all of which culminate in a film even hardened Dr Evil fans will find hard to criticise.

[Check out the Behind the Work feature on this spot here]

I think my favourite of the (very large) bunch is Uber Eats. The brief was to announce that, counter-intuitively, if not confusingly, Uber Eats now delivers more than just food.

Kicked off with a great line “If it was delivered with Uber Eats does that mean I can eats it?” delivered by the hilarious Jennifer Coolidge, it features other big names like Trevor Noah and Nicholas Braun tucking into non-food items they have had delivered with a not unexpected lack of success.

A highlight was seeing Gwyneth Paltrow having a tentative nibble of one of the infamous ‘This Smells Like My Vagina’ candles you can get on Goop. And I especially enjoyed the disclaimer at the bottom encouraging the audience not to eat things like pencils, kitty litter and sponges.